PhD student from Wrocław has built a breath-controlled wheelchair 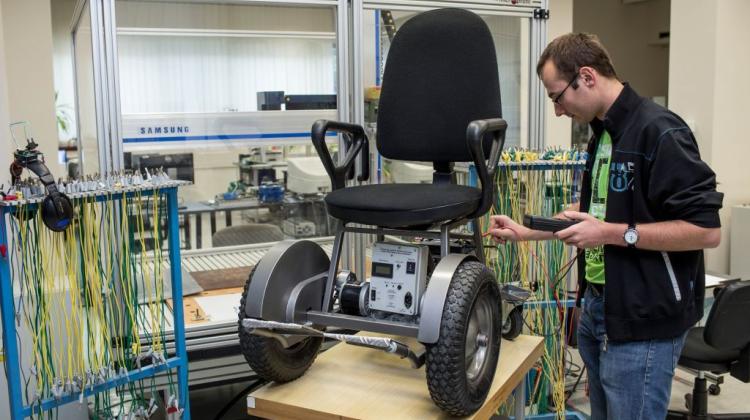 Movement of the head and a strong blow of air in the tube are enough to move the wheelchair built by Marcin Skóra, PhD student at Wrocław University of Technology. He now refines his invention to make it more intuitive and trouble-free.

"Just sit in the wheelchair, put on headphones with a tube mounted on them, blow air into it, tilt your head and basically you can ride" - told PAP the wheelchair constructor Marcin Skóra.

He prepared the vehicle as part of his MA project. "I wanted to do something working and useful. I prepared the prototype within one academic year" - said the inventor.

The impulse that signals the device that the user wants to move is a blow of air into a pressure sensor placed in the tube and the head movement.

The direction of movement of the vehicle and its speed depends on the user\'s head tilt. "If you tilt your head at an angle to the left or right, the wheelchair will turn in the corresponding direction. The more the head is tilted, the faster you can go" - said the designer.

The wheelchair moves on four wheels, two of which are driven by separate motors. Headphones and components they are fitted with serve as a "control module" for the device.

"The sole purpose of headphones is to be a platform for the necessary equipment. The main measurement and control component is the circuit board that has to be fixed on the user’s head. The tube and the pressure sensor are attached to it" - explained Skóra.

The inventor admitted that while for him manoeuvrability was not a problem anymore, those who tried this for the first time, would move with "a high degree of care" . "It was not control with precision down to the centimetre, but they mastered the basic movements quickly" - he emphasised.

The breath-controlled wheelchair will be of most use to patients who do not have enough strength in legs and hands to move on an ordinary wheelchair. It can also be used by people with paralysed limbs, who can freely move their heads.

Marcin Skóra wants to develop his project in the doctoral dissertation. " I\'m going to improve the control, so that the vehicle becomes even more intuitive and user friendly. I would like to use modern motors in the vehicle and prevent electronic and drive systems failures" - announced the inventor.

He admitted that he had already received letters from several people who used wheelchairs and would like to test the innovative design. There is no response from industry and investors, but sponsors who would help continue working on the wheelchair are welcome.

It is difficult to estimate the cost of the device. "I checked how much money I needed to complete the prototype. The costs of the used parts is about PLN 2.5 thousand. However, these calculations do not include the cost of hiring an employee or workshop equipment" - he emphasised.

He added that he would probably not be able to patent the technology, the design would become commonly known after being described in detail by the media. "But the patent is not that necessary, the point is that the wheelchair should help people " - said Skóra.