Medieval tower and paintings discovered by Polish archaeologists in Sudan 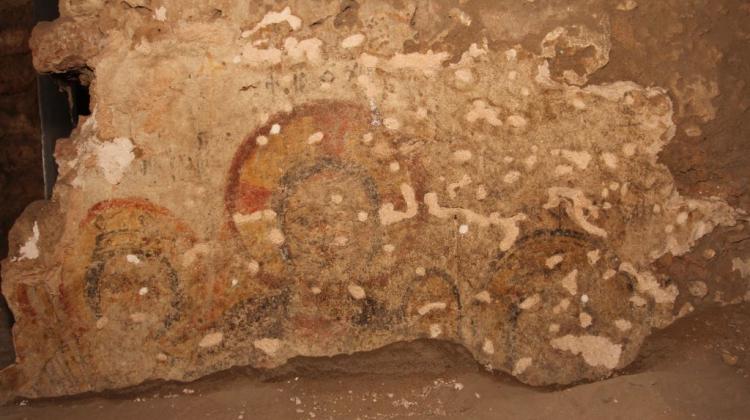 Perfectly preserved fragment of medieval fortification system and paintings inside the church from the ninth century have been discovered by Polish archaeologists in Old Dongola, Sudan.

Dongola Citadel is located on the uplifted rock on the bank of the Nile. It was surrounded by fortifications built in the late fifth and sixth centuries. In the past, archaeologists stumbled upon its walls, but never before so well preserved fragments. This year, they unveiled the tower preserved to a height of more than 8 m.

"Towers in Dongola were massive structures built of dried bricks and crushed sandstone blocks. They were built at regular distances of 32-35 meters" - told PAP head of the mission, Prof. Włodzimierz Godlewski.

In order to reach the tower, archaeologists had to wade through the remnants of the seventeenth century house built on the tower crown. The tower and fortifications was dated to the turn of fifth and sixth centuries. Its exterior, brick cladding has been added in the fifteenth/sixteenth century. Desert sand quickly covered unused fortifications. Its parts were used as residential house walls.

Another important finding of the Polish mission in Dongola are paintings located in the church adjacent to the king Joannes palace (sixth century). It is a big central basilica, measuring 25 x 15 meters, with walls and circular pillars in the southern and eastern parts preserved to a height of more than 4 m.

"Last season, slowly, as the conservation progressed, we have been uncovering the interior of the building. On the walls, as well as pillars and pilasters, appear more paintings on plaster made of lime" - said Prof. Godlewski.

Plaster surface is severely damaged and requires constant conservation during the excavations. However, the quality of the paintings - according to experts - is noteworthy. They depict Christ, Mary, saints, angels and archangels. Works of painting are accompanied by Greek inscriptions, but also Old Nubian texts, probably added later. According to the researchers, the church was built probably in the ninth century. Then, the city flourished as never before and never after.

Dongola was the capital of the Christian Makuria until the fall in the fourteenth century. The kingdom stretched from the northern area of today’s southern Sudan to Egypt. Polish archaeologists have been conducting excavations here for many years in various research projects. Excavations were initiated by Prof. Kazimierz Michałowski - the founder of the Polish school of Mediterranean archeology.

Prof. Włodzimierz Godlewski’s team primarily explores architectural complexes around the so-called Citadel. The work is carried out in cooperation of the Centre of Mediterranean Archaeology, Department of Archaeology of Egypt and Nubia, Institute of Archaeology, University of Warsaw and the National Corporation for Antiquities and Museums in Sudan. In the last season, research was carried out intermittently from November 2012 to February 2013.