New media does NOT destroy the child's brain, says psychologist 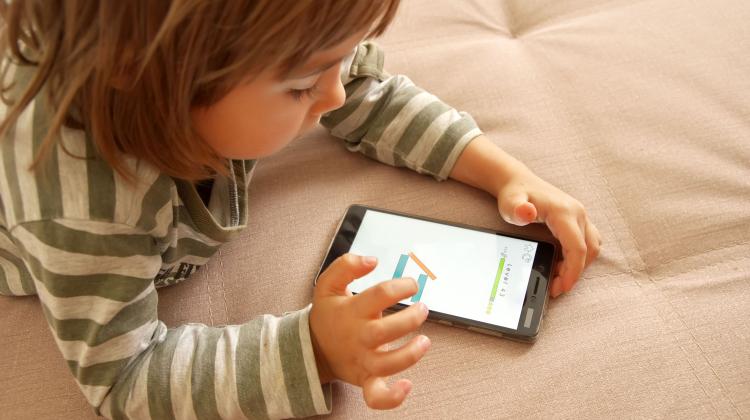 The claim that watching TV, using a smartphone or tablet destroys the child's brain is a myth. It is important, however, to provide new media in a manner adapted to the child's developmental capabilities, and the screen should not replace the parent. Psychologist Dr. Małgorzata Wójtowicz-Szefler talks about how to use information technologies in the first years of the child's life.

Dr. Wójtowicz-Szefler from the Kazimierz Wielki University in Bydgoszcz told PAP - Science in Poland: “There is a belief that frequent use of smartphones, tablets and watching television destroys the child's brain. This myth is not supported by science.

She added that many scientific studies conducted in recent years (e.g. https://www.jstor.org/stable/jeductechsoci.17.4.85) show that when used properly, new technologies can even positively affect the child's development.

According to the researcher adults should support children using information technologies and if a child uses new media, it is best for a parent to accompany the child. She said: “It is important to react with the child, comment, stop the program to explain things, and not just be somewhere near the child.”

According to the American Academy of Pediatrics guidelines, the use of screens should be completely avoided for the first one and a half years of that child's life. The exception are conversations and video calls with loved ones - to avoid the child losing contact with important people, you can invite them in front of the screen, the psychologist says.

After two years of age, if the child spends time in front of the screen, the guidelines recommend that it should not last longer than one hour a day.

In turn, guidelines prepared in Poland (including the 2012 Digital Future report prepared by the Modern Poland Foundation) say that a small child should not have devices such as TV, telephone, or tablet in their room. If the screen is used, this should be done in shorter sections of a few minutes. In addition, the content should fit the child's age (not very fast edits, characters accepted by the child, the music not too loud, and the language - correct). And the screen should not be used at least an hour before sleeping.

What does scientific research say on the threats and hopes related to the influence of the media on the development of a small person?

Dr. Wójtowicz-Szefler said: 'When the multitude of stimuli from new media reaches the senses, the brain must assign attention and memory resources and cope with functioning in two realities: ordinary and screen one.”

The immature brain of a small child intensively subjected to external impulses is not able to handle their excess, which is a common cause of attention deficit disorders. In a situation where new technologies constantly provide something new to a small child that is not able to sufficiently process it, the child begins to suffer from attention deficits and it is difficult to focus on important information, and thus is perceived as less capable than peers.

New media used in excess can negatively affect the development of the 'social brain'. It is important for the child's development to observe the behaviour of other people in direct interaction. In relations with others, we learn to avoid dangerous, undesirable actions, causing disgust - and to get closer to desired and beneficial situations. The mirror mechanisms are an important element of functioning in relationships. Meanwhile, a child immersed in digital media loses this key element of learning.

Wójtowicz-Szefler said: ’While a a small child may observe some behaviours in computer games or cartoons and form reaction patterns, but such learning is much slower and much weaker than an interaction with a real person.”

There are also threats to physical health, which is associated with the fact that the child develops the habit of spending time in a sitting position, in the absence of movement. And this can lead to incorrect motor development and overweight problems.

Another threat is the overloading of the eye and the risk of myopia.

In addition, the blue light emitted by screens affects the nervous system and can make it difficult to fall asleep, calm down, and function peacefully. “Long-term exposure to this light, for example, when the TV or the computer screen is on in the room, can cause agitation in children, and even behaviours that may be associated with ADHD,” said Dr. Wójtowicz-Szefler.

Behavioural addiction can also be a threat, for example addiction to using the Internet. Wójtowicz-Szefler continued: “This is the same type of risk as addiction to alcohol, shopping or gambling. She added that overstimulation, excitement about situations related to the use of the media can lead to changes in the nervous system in children - for example in the reward system. In order to be stimulated, the child then needs more and more stimuli, and therefore more and more screen time.

Another risk is exposure to content that is inappropriate for a child's development. And even cartoons or programs for children - as well as advertisements - may have content that is inappropriate for a small child, for example related to aggression. Other problems include too fast editing, too intense stimuli, or the presence of incomprehensible content that requires commentary from carers. Because of all this, the child's perception of the world can be disrupted.

There are also risks associated with the weakening of social relations.

Dr. Wójtowicz-Szefler said: “If a child watches cartoons, uses information technology for several hours a day - it builds relationships with virtual characters instead of real people. Compared to these characters, other children and other adults seem less interesting: they do not have superpowers, expensive clothes, quick movements. In such a situation, it may happen that the child is no longer interested in building real relationships.”

She added that when a child is left alone with new media, the process of building bonds between an adult and a child is also at risk.

In addition to the risks associated with the use of new media, there are also some opportunities. They include virtual, tactile and Kinect technologies that help encourage children to move.

A special case is using these technologies for motor therapy: as part of specially designed games, the child has to perform certain movements that it does not want to perform during physiotherapy.

“Another example of the positive impact of new media on a child's development is the use of toys - robots - among children with autism spectrum disorder. It is said that robots have a beneficial effect on the child's speech development and everyday activities,” Dr. Wójtowicz-Szefler said.

Yet another positive aspect related to the use of electronic media by young children is education. There are several IT tools that develop communication skills and support learning processes.

“This, said the psychologist, includes the beneficial effect of apps that teach social attitudes, help to observe the behaviour of others, help learn to read, write, and develop mathematical skills.”

She continued: “Electronic devices can also be used to keep in touch with family. It is more important that the child has contact with relatives and nurtures it than that he or she avoids using electronic devices.

ADULT - A GUIDE TO THE WORLD OF NEW MEDIA

“The world increasingly relies on new information technologies. And children come into contact with electronic devices from birth. The 'screen' reality, in the presence of which a child grows up, should be introduced into the child's life in an appropriate way so that it brings benefits instead of harm.”

Dr. Wójtowicz-Szefler also advises adults to consider why they allow young children to use information technology. Is it a way to relieve boredom ('and a child should have a chance to get bored sometimes'), or to calm the child down, or to spend time during a meal ('this can negatively affect the processes of regulating emotions, as well as satiety and hunger'), or maybe it's a form of reward or entertainment ('it should not be the most important form of entertainment'), or maybe a form of education ('sometimes it's worth letting a child look for answers on their own, rather than only learning the answers from the outside').

Adults should also be aware whether this is the best way to meet these needs in a given moment.

Dr. Wójtowicz-Szefler said: “It is therefore important that parents - who also use the media - teach children in what situations it is appropriate, how to do it and for what purpose.”