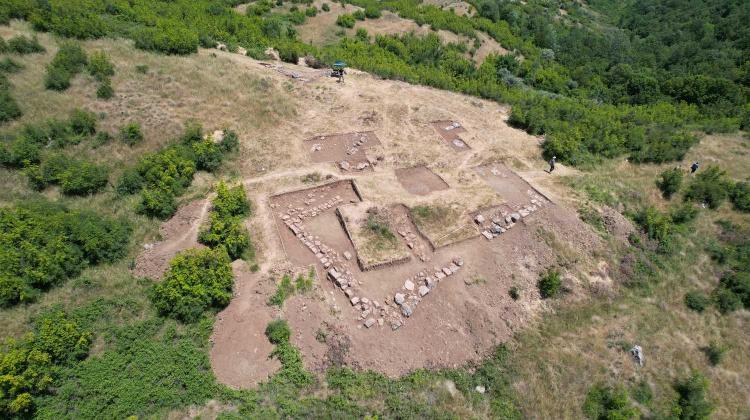 The hill near Bushat during archaeological research. Credit: M. Lemke

Archaeologists who discovered the remains of two large ancient stone buildings at the top of a hill in Albania say they have now started excavating its highest point.

According to research leader Professor Piotr Dyczek, they have already uncovered the foundations of ‘two extensive buildings’.

The original discovery of the lost city near today's Shkodër by the village of Bushat was made unexpectedly in 2018 when excavations first started.

The new location for excavations was based on geophysical research from 2018 which revealed solid walls.

During excavations, the researchers uncovered the remains of a large structure with an area of almost 20 by 12 m. Next to it was another building of similar size, and a little further a slightly smaller one, 10 by 7 m.

Dyczek said: “The city was abandoned. There were no traces of its violent end in the form of damage and burning. After being abandoned, it eroded over the last approx. 2 thousand years and its walls slid down the slopes.”

He added that it also served as a local quarry. The walls of many surrounding houses are built with cut large blocks from the archaeological site.

Despite the erosion and human activity within the ancient city, archaeologists managed to find fragments of old ceramic vessels. Their analysis established that the hill had already been inhabited in the second millennium BCE and abandoned probably at the turn of the era or a little later.

Inside the buildings, the researchers found fragments of amphorae, mainly from Italy and dated to the 3rd and 2nd century BCE, as well as skyphoi - Greek two-handled deep wine-cups.

Dyczek said: “Most of them are very small. In antiquity, such miniature vessels were either toys or cult items. It is difficult to determine the functions they had in this place.”

So far, scientists have not been able to determine the function of the discovered buildings. They believe that they are not similar to any other buildings in this area, which hinders their identification.

But considering the that they were exposed on the hill, they had to be prestigious.

The buildings had solid, 90 cm wide foundations. Local raw material, conglomerate rock, was used. The builders did not use mortar. The roofs were covered with specially profiled Greek-style tiles.

Dyczek said: “This means that they were not ordinary residential houses, in addition, they are in the dominant location in the city. We could make different guesses, but we have to wait for the results of further research.”

All data indicate that the discovered buildings come from the Hellenistic period, the end of the 3d and the 1st half of the 2nd century BCE.

In 2018, archaeologists uncovered solid, Cyclopean defensive walls, two gates with bastions and fragments of buildings. Scientists estimate that the fortress had an area of nearly 30 acres. The fortified city was located between two important Illyrian (present-day Albania) centres - Scodra (the capital of Illyria) and the Greek city of Lissos. Perhaps it was Bassania, but archaeologists are still looking for convincing evidence to support this hypothesis. The city was described by a Roman historian, Livy (59 BCE - 17 CE) in the context of the battles between the Roman troops and the last Illyrian king, Gentius.

The Albanian team leader was Dr. Saimir Shpuza from the Institute of Archeology in Tirana.