Food with insects to be given to dogs with allergies 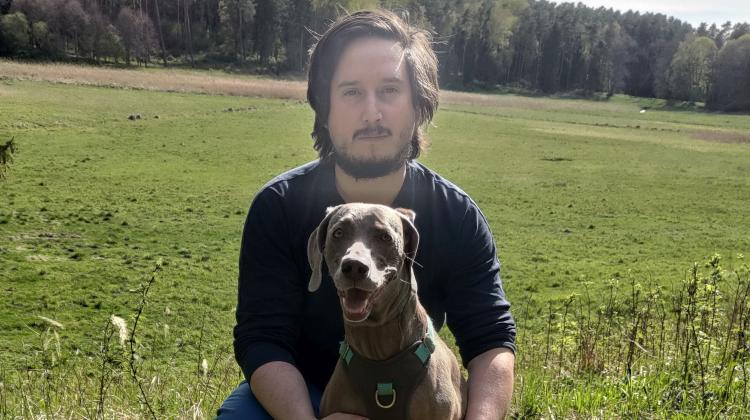 Food made from insects can protect dogs from diseases resulting from food allergies. Diet-dependent enteropathy affects not only pure-breed dogs. A team of scientists led by Dr. Remigiusz Gałęcki, winner of the NCBR LIDER competition, is working on mealworm dog food and testing it in accordance with the principles of fact-based medicine.

PROOF OF INSECT HYPOALLERGENICITY - INSIDE THE DOG'S BODY

“We want the mealworm dog food to be a typical veterinary food that eliminates diet-dependent enteropathy. Therefore, we will check its effectiveness and safety of use in nutrition of companion animals. We care about our patients and we intend to guarantee animal owners that the food does not cause allergies,” announces the project leader.

He adds that food allergy prevention should not be confused with treatment and insect-based food will not be a 'medicine', but a product composed in accordance with the principles of fact-based medicine.

Diet-dependent enteropathy is a growing problem. Up to 33 percent of dogs are allergic to at least one ingredient present in foods for companion animals.

“In my medical and veterinary practice, I had cases of dogs with symptoms so severe that they could not consume any of the available standard foods - they had some symptoms of allergies after each of these foods. The symptoms of diet-dependent enteropathy in dogs include skin changes such as itching , dirty ears, swollen glands around the anus; diarrhoea can also occur,” says the veterinarian who works in a clinic and does scientific work at the Faculty of Veterinary Medicine of the University of Warmia and Mazury in Olsztyn.

Practice does not confirm a correlation between the breed and the occurrence of these diseases. Dr. Gałęcki's team plans statistical research that will expand knowledge about allergic diseases in dogs.

A group of about 30 dogs from veterinary clinics will have a chance to consume mealworm food. During nutrition, scientists will conduct thorough analysis of the microbiome, morphological and biochemical of blood tests, histological analyses, computed tomography and equally significant gastroenterological tests - they will use an endoscope to look inside the digestive tract of their patients. Planned research stages are similar to the process of drug testing.

The scientists will first develop five dog food recipes based on mealworm. In the first stage, the foods will be tested on laboratory animals. The researchers will check if food has a positive effect on rats and how it is accepted by them. Then, the best and most effective recipe will be selected and patented. At that stage, thorough immune and histological testing (still in rats) will start. The scientists will assess the impact of food on the functioning and physiology of the digestive tract. Only after the tests show a positive impact (or lack of negative impact) on laboratory animals, testing on dogs will begin with the consent of their owners.

“Environmental factors very significantly affect the clinical condition of veterinary patients. That is why we will first approach a company that will conduct food tests on dogs under controlled conditions. If the positive effects of insect-based animal food are confirmed, then we will move to clinical and developmental research,” says Dr. Gałęcki.

He admits that he has already tested the 'treats' from the test batch of 'insect' food on his Weimaraner. The dog eagerly ate it.

DOGS CAN EAT INSECTS IN NATURE

Insects are consumed by dogs’ ancestors, wolves. In the case of food deficiency, dogs can also be 'optional insectivores'. However, the described food does not mean that there will be worms in a dog bowl. “Insects will processed, and the food itself will be supplied to the animal in the form of pellets, just like the commonly used meat food. This is very important from the point of view of the food acceptance by animal owners. Dogs themselves are not picky (as opposed to cats) and if this food is acceptable for them in terms of smell and taste, the form itself is less important,” says Dr. Gałęcki.

The 'insect' food requires a technological process to ensure that dogs eagerly eat it. But it is not about adding a smoked sausage flavour to it - the doctor emphasises that companion animals must not be fed with smoked products.

The new food is not intended only as an alternative for the time of allergies. According to the assumptions, it is to become a maintenance food, one that an animal can consume throughout its life.

The scientist emphasizes that insect protein is at least equivalent to protein present in meat foods. He assures that it is sufficient for the dog to develop and function well.

“Insect protein is better absorbed and more digestible for dogs than dried poultry protein. It has a negligible effect on the immune system. Unfortunately, the substrates added to commonly used foods (under enigmatic names in the food composition) are among the reasons for the more frequent occurrence of diet-dependent enteropathy,” concludes the veterinarian.

IS A WORM-EATING DOG A VEGETARIAN?

“Veterinary entomology is a science dealing with those insects that bite us and those that we can bite,” jokes Dr. Gałęcki. The first branch of this science are edible insects, unconventional farm animals. In the EU, seven species of insects are included in this category. The second branch are pests, insects that can be found in animal food and products intended for human nutrition. The third branch are ectoparasites - insects that can be vectors of many infectious diseases.

The mealworm used to be considered a flour and cereal pest. Research and experience revealed its nutritional potential. Today, it can be used in so-called upcycling, to produce high-quality insect meal.

The project was also accompanied by a survey of acceptance of insects as a vegetarian product. It turned out that some people accept insects in a vegetarian diet, the exception are vegans who do not consume any products of animal origin.

Scientists are preparing for cooperation with companies that specialise in animal nutrition. The food recipe will be protected by a patent, and a license will allow the product to be launched together with an industrial partner. The food has a chance to gain a competitive advantage. Currently, the law does not regulate the naming of maintenance and diet foods, so the term 'hypoallergenic' does not guarantee that the effectiveness has been tested. Black fly larvae foods have appeared on the market, but no publications or approvals confirm their hypoallergenicity.

Connecting insect breeding (dynamically developing in Poland) with nutrition of dogs gives hope for establishing successful inter-sectoral cooperation. The project also has an important scientific dimension. For three years, the project will employ nine people in the research team. In addition to Dr. Gałęcki, the main contributors will be specialists in the field of veterinary medicine, biology and economics. Maria Hanuszewska-Dominiak (a veterinarian and zootechnician) will be responsible for histology, microscopic examination of tissues. Gastroenterologist Ewa Kaczmar will look into the digestive tract of quadrupeds and perform computed tomograph tests. Economist Paulina Pukin-Sowul will conduct market research on the acceptance of such foods by animal owners. Microbiologist Dr. Justyna Szulc from the Lodz University of Technology will examine the intestinal microbiota in dogs consuming the new food and check the effects of insect protein on bacteria in the digestive tract of dogs. As part of the team's work, scientific publications will also be prepared by doctoral candidates.

The National Centre for Research and Development will spend nearly PLN 1.5 million on the 'Development of insect protein foods for companion animals with diet-dependent enteropathy'.