Student
This text can be copied 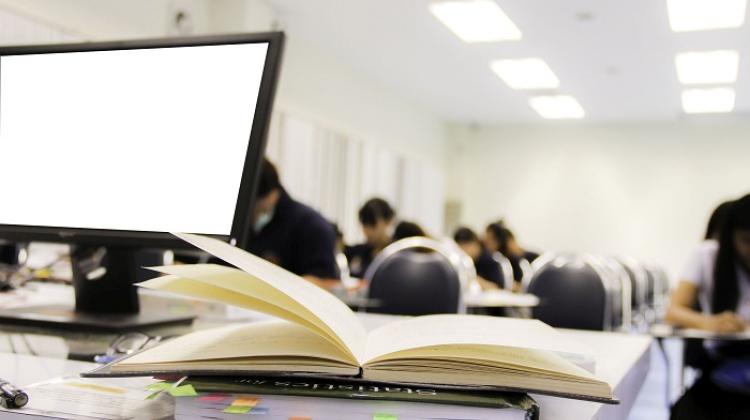 Nearly 5,700 Ukrainians have applied to study at Polish universities since Russia’s invasion on February 24.

This number includes 873 Ukrainians currently in the process of recruitment for studies or continuation of studies at universities, and 472 already accepted, the Ministry of Education and Science reports.

Already the largest group of international students at Polish universities for years, the new figures mean they now make up 41.5 percent of all foreigners studying in Poland.

In addition, there are 146 doctoral candidates with Ukrainian citizenship at doctoral studies and doctoral schools, which translates into 17 percent share of Ukrainians in the total number of foreigners in third-cycle programmes.

Poland’s Ministry of Education and Science spokesperson Adrianna Całus told PAP that the head of the ministry recommended dividing fees for educational services and other fees charged by universities into instalments (for current students from Ukraine, and exercising of rectors' statutory right to exempt from fees.

She said: “Ukrainian citizens who started education in the academic year 2019-2020 or later are still eligible for benefits under the Law on Higher Education and Science.

“All foreigners may apply for a rector's scholarship, a scholarship for the disabled and allowances under the Law on Higher Education and Science.”

In addition, only those students who meet one of the conditions set out in the Law, for example those with permanent residence permits, can apply for social scholarships and student loans.

On the other hand, the provisions of the previous law (of July 17, 2005 - the Law on Higher Education) apply to Ukrainian citizens who started their education before October 1, 2018 and in the academic year 2018-2019. This means that foreigners who have started studying on the same conditions as those that apply to Polish citizens are entitled to financial aid from the state budget.

Całus said: “People who started studying on conditions other than those that apply to Polish citizens, the so -called +conditions for foreigners+ (...) do not have the right to receive non-repayable financial aid.”

She added that the science minister requested that Ukrainian citizens who went or were going to go back to their country in connection with the armed conflict not be removed from the list of students.

She said: “In such cases, the Ministry of Education and Science recommends granting leave from studies for the duration of such an absence (...)on the principles set out in the study regulations.”

Ukrainian students in Poland are also supported by the National Agency for Academic Exchange (NAWA). At the end of April, the agency informed that as part of the 'Solidarity with Ukraine' programme, scientific institutions supporting Ukrainian students and doctoral candidates who left their country after the Russian invasion would receive support in the total amount of over PLN 23.3 million.

As part of this support, Ukrainian students have the opportunity to study at Polish universities in the period from March 1 to September 30. In addition to exemption from fees for education, a scholarship will be paid to participants. If necessary, psychological and legal assistance will also be provided. This support will benefit approx. 2,000 people.

According to information gathered by PAP’s correspondent in Kiev, university students in Ukraine currently usually have classes online. Those universities and faculties that still can teach in-person classes do so and teach classes even on weekends. Due to the war, the rules for the defence of diploma (bachelor and master's) theses and have been changed and deadlines extended. The changes apply primarily to the form of the diploma exam, which in most cases will be taken online. The dates of entrance exams for master's studies will also change.

By the end of May, universities in Ukraine are expected to publish the rules of admission in the academic year 2022-2023. The basic scheme of recruitment and dates, which each university is to adapt to its needs, was published on the website of the Ukrainian education ministry in the beginning of May.