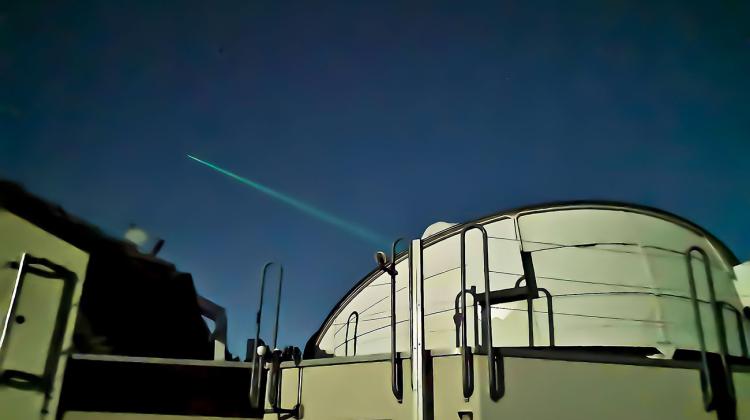 Scientists from the Wrocław University of Environmental and Life Sciences have put forward a more accurate way of measuring the distance between the Earth and the Moon.

The proposed method, which takes into account the thickness of the atmosphere layers through which the laser passes, will also enable more accurate observations of the shape of the Earth, melting glaciers and changes in the level of ocean waters.

Researchers from the university’s Institute of Geodesy and Geoinformatics  showed that the previous approach to correcting errors resulting from the laser beam delay in the atmosphere was incorrect.

Laser measurements are based on the registration of the time difference between the moment of sending a laser pulse at the station and the moment of that pulse's return after it is reflected by retroreflector on a satellite or the Moon. During the measurement, the laser beam passes through the Earth atmosphere twice, where it is subject to deflection and delay. Laser detector technology allows scientists to obtain sub-millimetre accuracy. However, errors affecting the determination of laser beam delay in the atmosphere are many times larger and constitute the main source of errors in laser measurements of distances to satellites and the Moon.

Meteorological readings at the station are used to determine the laser delay value. The correction calculated for these measurements depends on the satellite's altitude over the horizon and the initial laser beam delay value. The Wrocław scientists want to analyse all measured distances at all stations. Then it would be possible to calculate corrections for all stations that would be directly proportional to the laser beam delay resulting from direct meteorological measurements and atmosphere thickness.

The scientists led by Professor Krzysztof Sośnica say that such a meteorological amendment could only be calculated once a week for each laser station. As a result, the calculations remain stable even for a station with a small number of registered laser measurements for satellites, and at the same time the error resulting from atmospheric delay is almost completely eliminated. The method developed by the Polish team allows for effective elimination of 75 percent to 90 percent of systematic errors in laser measurements resulting from atmospheric delay errors.

Thanks to laser measurements of distances to the Earth's artificial and natural satellites, scientists determined the value of the Earth's gravitational constant and mass and learned how the flattening of the Earth changed in time. They can correct and calculate the position of Galileo and GLONASS satellites. They located the Earth's centre of mass and determined it's shifting in time due to melting Greenland glaciers. Laser measurements of the distance to the Moon also made it possible to discover that the Moon moves away from Earth by 3.8 cm per year. They enabled a detailed description of fluctuations in the Moon's movement (libration) and revised its origin.

Professor Krzysztof Sośnica's research group deals with the development of laser and microwave techniques in satellite geodesy, as well as the determination of precise orbits of artificial satellites and parameters describing the Earth. The Associate Analysis Center of the International Laser Ranging Service (ILRS) operates at the Institute of Geodesy and Geoinformatics of the Wrocław University of Environmental and Life Sciences since 2017. The center is responsible for monitoring the quality of orbits of Global Navigation Satellite System (GNSS) satellites: Galileo, GLONASS, BeiDou and QZSS using orbits based on microwave observations and direct laser measurements. The center in Wrocław is the only one in the world that specializes in the combination of two observational techniques of artificial satellites: laser and microwave GNSS.