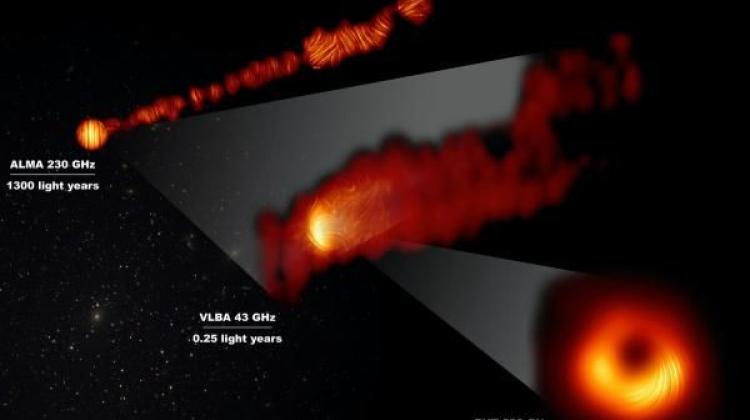 Space researchers analysing the properties of a supermassive black hole have managed to both measure its polarization and imaged its magnetic field.

The polarisation of light carries information that allows scientists to better understand the physics behind the black hole’s shadow image, discovered on April 10, 2019, and in particular the properties of the magnetic field in the vicinity of the object.

Coordinator of the EHT Polarimetry Working Group, Professor Monika Mościbrodzka from Radboud University in the Netherlands, said: “We are now seeing the next crucial pieces of evidence to understand how magnetic fields behave around black holes, and how activity in this very compact region of space can drive powerful jets that extend far beyond the galaxy.”

Bright jets of energy and matter emerge from the M87 galaxy’s core and extend at least 5,000 light-years from its centre. This is one of the galaxy’s most energetic and mysterious features. At the centre of the galaxy 55 million light-years away is a supermassive black hole. Most matter close to the edge of a black hole falls in. But some of the surrounding particles escape moments before capture and are ejected into space in the form of jets.

To explain this process, astronomers created different models of how matter behaves near the black hole. But they still don't know exactly how these huge jets are launched from the central region of the galaxy (the size of which is comparable to the Solar System), or how exactly matter falls into the black hole. The new research allows scientists to look into the region just outside the black hole (close to the event horizon) where this interplay between matter flowing in and ejected out is happening.

It turns out that only theoretical models featuring strongly magnetised gas can explain what the researchers are seeing at the event horizon. The results suggest that the magnetic fields at the

suggest that the magnetic fields at the periphery of the black hole are strong enough to repel the hot gas and help it resist the black hole's gigantic gravitational pull.

Eight radio telescopes around the world have been linked to create a virtual Earth-sized telescope. The obtained resolution with the EHT would allow to measure the length of a credit card on the surface of the Moon.

The results were published in two papers in The Astrophysical Journal Letters. They are accompanied by additional work based solely on data from the ALMA radio telescope network. More than 300 scientists from five continents are taking part in the EHT research.