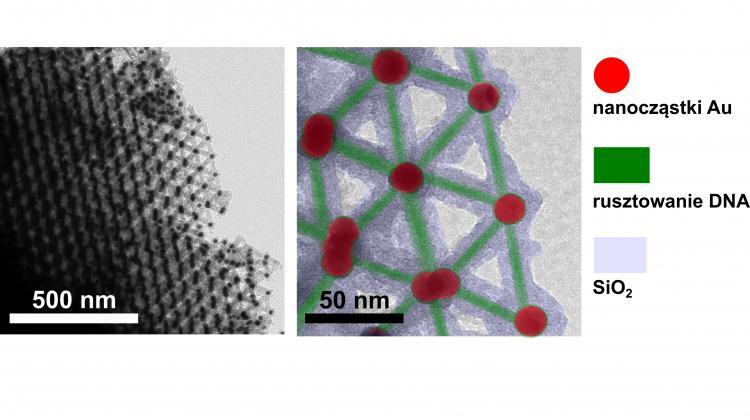 Scientists show how to use silica to achieve stability of super-precise nanostructures made of DNA and nanoparticles. Credit: Paweł Majewski

It has been known for some time how to use DNA strands to embroider 2D shapes and build nanometer-sized structures. But these structures were stable only in the aquatic environment. Now scientists have shown how to go "ashore" with the solutions and use DNA to produce super-resistant nano-objects.

The team led by Professor Oleg Gang from Brookhaven National Laboratory and Columbia University showed how DNA, gold nanoparticles and silica can be used to create microscopic 3D objects with excellent resiliency. The structures obtained, produced in an aqueous environment, retain their shapes after complete drying in a vacuum and are very resistant to high temperatures, crushing and radiation.

The research has been published in Science Advances, and the first author of the paper is Dr. Paweł Majewski from the Faculty of Chemistry, University of Warsaw.

We usually perceive DNA as the carrier of genetic information. However, scientists have been showing for years that the information in DNA can be used to build pre-designed shapes. Fragments of chains looking for their other halves are like smart glue: they can bind to a predetermined another chemical molecule or nanoparticle and thus form create complex shapes made with nanometer precision, thousands of times smaller than the thickness of a hair.

Dr. Paweł Majewski told PAP that scientists have already shown some time ago that DNA strands can be used for super-precise assembly of various structures called DNA origami. In one study, a nanometer-sized smiley face symbol was assembled from DNA. Some time later, it was shown that DNA could also be used to build tiny 3D structures - for example, a nanometer-sized teddy bear was assembled from DNA strands.

These studies, while visually attractive, had a serious limitation. DNA is a very delicate material that is easy to damage, for example by removing it from the aquatic environment or by exposing it to radiation or substances such as alcohol. DNA nano-embroidery and structures were very unstable.

“We we go ashore with DNA structures. Our objects retain their structure also outside the aquatic environment,” says Dr. Majewski.

The research paper shows how to preserve scaffolds made of DNA and gold nanoparticles in a controlled manner by coating these small structures with a layer of silica. Silica 'sticks' to the entire structure and gives it strength. So even if the DNA inside the structure is destroyed, the silica armour remains. And it retains the shape of a miniature structure.

“These structures will remain the same even when heated to over 1000 degrees C,” says Dr. Majewski. He adds that such a lattice created thanks to DNA is also very resistant to crushing and can withstand pressures of 8 Gpa (80 thousand atmospheres). The material is also X-ray resistant and will not break even in a vacuum.

“These self-assembled nanoparticles-based materials are so resilient that they could fly in space,” says Professor Oleg Gang quoted in Brookhaven National Laboratory press release.

Super-precise nanostructures with a size thousands of times smaller than the thickness of a hair can be used in, among other things, the construction of tiny sensors or computer chips. However, since the production of such nano-objects has not been possible until now, ideas for their use are only just beginning to appear.