Angular momentum in nuclear fission like a bursting balloon 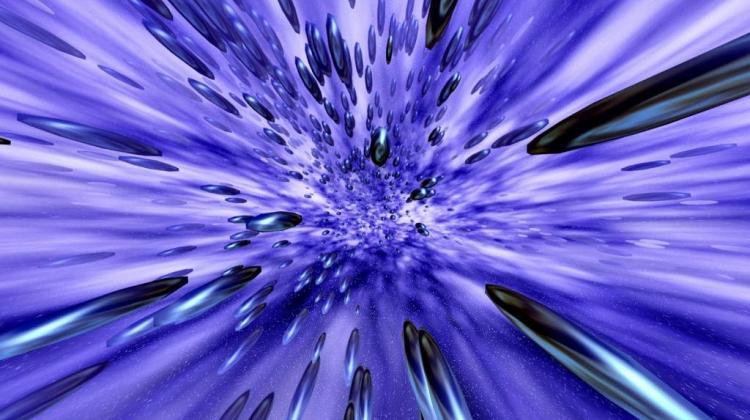 The angular momentum in nuclear fission is similar to a bursting balloon, says new research.

To solve the mystery of whether angular momentum appeared before or after the atomic nucleus split, an international team of researchers, including scientists from the University of Warsaw, carried out a series of measurements at the IJC research centre in Orsay, France.

Deciding to induce a nuclear fission, they used a collimated beam of fast neutrons to hit targets containing fissile materials such as isotope of uranium (238U) and thorium (232Th).

In an additional measurement, the spontaneous fission of the californium (252Cf) isotope was also studied. Gamma radiation, accompanying nuclear fission reactions, was recorded by an array of approximately 200 detectors. Cascades of gamma transitions in around 30 fission fragments were successfully reconstructed.

In a press release, Warsaw University said: “When an excessively inflated balloon bursts, its pieces fly away in opposite directions, making various aerial stunts. The process of nuclear fission is similar.

“The nucleus splits into two parts, which is accompanied by the emission of several neutrons. The energy released in the process manifests itself not only in the form of kinetic energy of the fragments formed, but also in the form of rotation and other nuclear excitations.

“One of the accompanying phenomena is the emission of gamma ray quanta, which carry not only the excess energy, but also the angular momentum (that is, they inhibit the rotation).”

Moreover, there is no information exchange between the formed fragments.

Warsaw University said: “A new model was proposed, in which the fissioning nuclei form a neck, and after it breaks, two separate fragments with very elongated shapes appear. The new systems tend towards a spherical shape, and the energy associated with the deformation is converted into excitation of the newly formed atomic nuclei. The proposed process explains the statistical nature of excitations, independent for each fission fragment.”

The results obtained by the physicist from the Nu-ball group are relevant for nuclear reactor modelling, where gamma radiation and its multiplicity are important components of the heat transport calculations. They are also important in the production of new superheavy elements and exotic nuclides with large neutron excess.

The article published in Nature is the result of collaboration of physicists from 37 research centres (from 16 countries), forming the Nu-ball research group, including scientists from the Faculty of Physics at the University of Warsaw. The article, whose first author is Jonathan N. Wilson from the IJC France, was co-written by Dr. Agnieszka Korgul, Dr. Krzysztof Miernik, Dr. Victor Gauadilla and PhD students Monika Piersy and Ewa Adamska from the Faculty of Physics of the University of Warsaw.