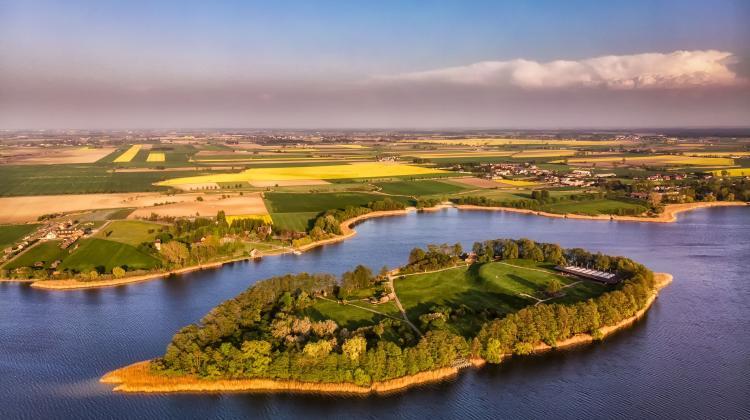 The construction of the palace and church complex on Ostrów Lednicki (Wielkopolska) began in the years 936-985, the latest physicochemical analyses has revealed.

Researchers agree that the first Piasts did not have a capital; they moved between the main fortified settlements of the country, which contained palas buildings, i.e. residential and sacred buildings. Mieszko I probably used residencies in Poznań, Gniezno and Ostrów Lednicki.

It has long been known that the palace and church complex on Ostrów Lednicki consisted of two parts: a chapel and a residence. The building was built of glacial erratics, used to erect walls and foundations and connected with gypsum and lime mortar.

The chapel has the shape of a Greek cross and there are small apses in its arms. In the northern and southern arm of the chapel there are depressions some researchers interpret as the remains of baptismal basins. From the west, a residential part adjoins it, built on a rectangular plan with dimensions of 14 by 31 m.

It was also previously known that the palace and church complex on Ostrów Lednicki was built in the early days of the Piast state. But the previous conclusions about its age were based mainly on architectural analyses.

Now, scientists analysed numerous particles of mortar coal taken from the walls of the medieval building, as well as fragments of bones and grains found right next to the palace. Using the radioactive carbon isotope (C14 AMS) method they noted that dating with this method was insufficient and prone to inaccuracies, so they also applied a method that enabled them to specify the age of the building: modelling based on Bayesian statistics (the name comes from the eighteenth-century mathematician Thomas Bayes). The obtained C14 dates were entered into this model.

In the case of the study of the complex on Ostrów Lednicki, the use of modern statistics allowed researchers to establish that its construction began in the years 936-985 (with nearly 70 percent probability). The analyses were performed by Professor Tomasz Goslar from the Poznań Radiocarbon Laboratory.

Coordinator of the new research project, Danuta Banaszak from the Museum of the First Piasts in Lednica, told PAP: “Everything indicates that the construction of the palace and church complex began just after the erection of the bridges leading to the island.”

During previous dendrochronological analyses, scientists determined the felling date of the trees used in its construction - the years 963-964. This means that the palas was built during the reign of Mieszko I (960-992).

Banaszak added that in Poland there are several other known remnants of similar residential buildings (for example in Giecz, Poznań or Przemyśl), but none of them so well preserved. Determining their age so precisely was impossible, as it was not possible to collect so many samples for physicochemical analyses.

She said: “Our latest research allows us to define the complex in Lednica as one of the oldest structures of this type in Poland with a very high probability.”

During the latest research, scientists also discovered six tiny glass fragments in both the outer walls of the palace chapel and inside, leading Banaszak to believe they could be the remains of the chapel’s glass windows.

Data on window openings and their finishing are not known for other structures of this type in Poland due to their fragmentary state of preservation.

The researchers have also reexamined a fragment of plaster with a partially preserved painting discovered a few years ago at the northern wall of the palace chapel in a layer estimated to be from the second half of the 11th/12th century.

Banaszak said: “It is most likely a fragment of plaster from inside the chapel. A semicircular line is visible on it, which could be a fragment of a halo.”

Analyses with the X-ray fluorescence scanner revealed that the dark pigment on the plaster could be made of bone char, obtained by burning bones, or a plant-based dye. The pigment also contains iron and copper which the experts believe was a way to give the dye a metallic sheen or a green tint.

The latest research was carried out as part of the grant 'Ostrów Lednicki - the palas of Mieszko I and Bolesław the Brave. Chronology and context', awarded by the Ministry of Culture and National Heritage.