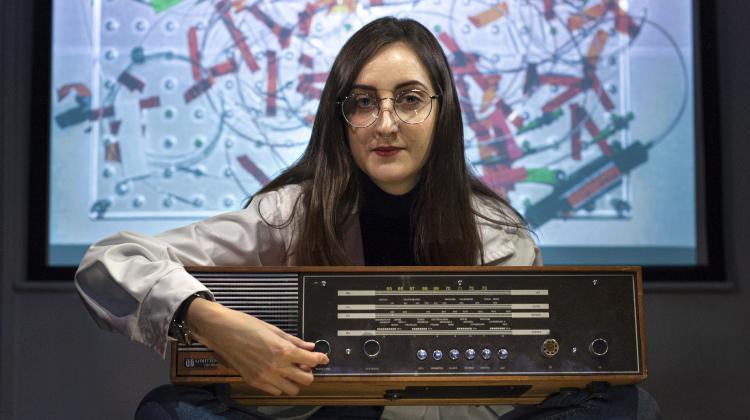 The laser constructed by the team of Dr Stepanenkio

Would you like to capture a chemical transformation inside a cell live? Or maybe revolutionize microchips' production by printing paths in a layer that has a thickness of just 100 nanometers? These and many other goals can now be achieved with the latest femtosecond laser created by a team of scientists led by Dr. Yuriy Stepanenko.

These days, there is a multitude of laser light sources. They each have their characteristics and different applications, such as observing stars, treating illnesses, and surface micro-machining. “Our goal is to develop new ones,” says Yuriy Stepanenko, head of the team of Ultrafast Laser Techniques at the Institute of Physical Chemistry of the Polish Academy of Sciences. “We deal with sources that produce ultrashort pulses of light. Really very, very short - femtosecond pulses (that's a part of a second with 15 zeros after the decimal point). This is the scale on which, for example, intracellular chemical reactions take place. To see them, we have to "take a photo" in this very short time. And thanks to the new laser, we can do just that.

“We can also use our source for the very precise removal of materials from various surfaces without destroying them,” says the scientist. “We could, for example, clean the Mona Lisa using this method without damaging the layers of paint. We would only remove dust and dirt, a layer about 10 nanometers thick," explains Dr. Stepanenko, one of the authors of a study recently published in the Journal of Lightwave Technology (doi: 10.1109/JLT.2020.3031540.).

“But for this sort of job, our laser is even rather too precise,” notes Dr. Bernard Piechal, co-author of the publication. “For this, you only need nanosecond pulses, i.e. pulses lasting a thousand times longer. The latter, however, would not be able to, for instance, draw paths of precisely planned depths in ultra-thin materials, e.g. removing gold sprayed on microchips with a precise adjustment of the thickness of the layer being removed. But our laser can do this! It can also make holes in tempered glass or ultra-thin silicon plates. In these conditions, a nanosecond laser would either melt the silicon or "smash" the glass because it produces too much heat. Too much energy is concentrated locally in a very small area. Ours works firmly but gently,” grins Dr. Stepanenko.

How was this effect achieved?

“We wanted our source to meet two conditions: it was to be susceptible to mechanical disturbance to the least possible extent, and it was to be mobile,” explains Dr. Piechal. “We did not want to create a huge, stationary structure.”

Fibre-optic lasers came to the rescue of the team. ”This sort of laser is basically an optical fibre enclosed in a ring. The laser pulse runs inside it without being exposed to mechanical disturbances. The optical fibre can be touched, moved, even shaken without compromising the stability of the pulse. Of course, if the light only ran round in a circle like this, it would be useless, so part of this impulse is directed outside the loop in one place in the form of useful flashes,” explains Dr. Stepanenko, with a smile.

Here we come to another important parameter of this sort of pulsed laser: the frequency with which the pulses appear at the output. In conventional designs, this frequency depends on the length of the fibre optic loop in which the pulse travels. Its practical length is several dozen metres. Which is quite a lot, isn’t it? What if we wanted flashes of light to appear as often as possible? This can be done by reducing the circumference of the ring through which the pulse travels. Only that this sort of action has its limits. “In our lasers, the smallest loop gives pulses every 60 nanoseconds, which is still too slow for our desires,” explains the researcher. How can this frequency be accelerated? This is where the new invention of the team from the IPC PAS comes in: a system that allows the basic frequency to be duplicated as if creating harmonic frequencies on the basic frequency of a guitar string. “We use so-called Harmonic Mode Locking,” explains Dr. Stepanenko. “What is innovative in our design is that we are able to switch this repetition rate in a controlled way and select only one of the possible harmonics, the particular one we need. You could say that we are like a guitarist- on an open string, i.e. our loop of the fibre, we obtain a specific frequency resulting from its length. When we put our finger exactly in the middle of the string, we get the so-called second harmonic. The pitch increases by an octave and the vibration frequency doubles. If we put our finger on 1/3 of the length of the string, we get a frequency equal to three times higher than on the open string. In our case, we increase the frequency of the pulses by turning the knob. We can only do it in steps, each time getting another harmonic, just as the harmonics in the guitar change in steps, but the range is quite large: we can change our light harmonics from 2 up to 19 times above the basic frequency, i.e. reach a frequency of pulses up to just over 300 MHz.

It is extremely important that the obtained frequencies are stable and can be precisely distinguished. If we choose a harmonic, all the others will be so damped that their "volume" will be about 10 million times lower than that of the chosen one. You could say that we are generating a pure sound and eliminating all the background noise. In addition, the higher the frequency, the better it is defined. “We are the first to have managed to do this so well,” says the researcher proudly.

It is left to us to wait for the invention to be implemented in more industrial applications. Perhaps it will mean even thinner and lighter laptops for us or better knowledge of what is happening inside the human body.