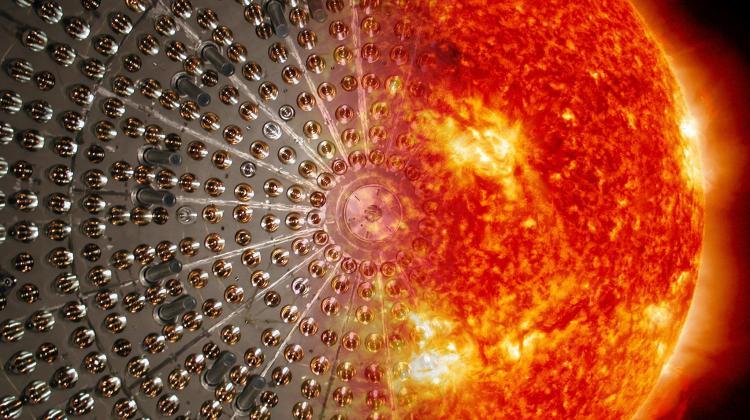 Solar neutrinos produced by the Sun have been recorded for the very first time, with the help of Kraków scientists working on the Borexino experiment of particle physics to study low energy solar neutrinos.

The recording is the first experimental confirmation of the existence of this energy source which scientists say “closes a fascinating chapter of research, which dates back to the 1930s.”

This research provides a better understanding of how energy is generated in stars much larger than the Sun, because in such stars the CNO cycle is the dominant energy source. The BOREXINO team has obtained experimental confirmation of the existence of the main hydrogen combustion process in the universe.

One of the things that makes life on Earth possible is the presence of light and heat from the Sun. And the energy of the Sun comes from nuclear fusion. As a result of this fusion, the nuclei of the lightest element (hydrogen) combine to form the nucleus of a heavier element (helium), releasing particles carrying a lot of energy. Such nuclear fusion on the Sun can occur via two processes: the so-called the PP (proton-proton) chain, which produces 99 percent of the Sun's energy, and the CNO cycle, where helium can form in the presence of other elements: carbon, nitrogen and oxygen, which act as a catalyst.

As part of the BOREXINO experiment running since 2007, carried out at the underground Laboratori Nazionali del Gran Sasso of the Italian Istituto Nazionale di Fisica Nucleare, by measuring the neutrino fluxes generated in individual thermonuclear reactions, researchers studied the main mechanism of energy production in the Sun, the PP chain, which begins with the merging of two protons. Now, with the first direct measurement of the relatively small neutrino flux from the CNO cycle, the BOREXINO team has proven the existence of this additional source of solar energy.

“Now we finally have the first ground-breaking, experimental confirmation of how the stars, heavier than the Sun, shine,” says Professor Gianpaolo Bellini from the University of Milan and INFN, one of the main initiators of the BOREXINO project.

Professor Marcin Wójcik at the Jagiellonian University in Krakow, winner of the Prime Minister of Poland Award for outstanding scientific achievement related to the BOREXINO experiment, said: “The first direct and accurate measurement of the PP-type neutrino flux from the basic thermonuclear reaction taking place in our nearest star was a huge success, while the registration of CNO neutrinos is the culmination of our more than 25 years of solar neutrino research. It is an extraordinary intellectual adventure to participate in the confirmation of fundamental predictions related to the structure of stars.”

He added: “Since 1994, the BOREXINO group from the Institute of Physics of the Jagiellonian University in Kraków, having obtained several NCN grants, had a key role in the design and construction of the detector and its infrastructure. In cooperation with the Max Planck Institute of Nuclear Physics in Heidelberg and the University of Princeton, we obtained unprecedented detector purity due to the level of radioactive isotope content.”

Solar neutrinos can only be observed by highly sensitive detectors in which most background sources have been eliminated. By background we mean all processes that can mimic a neutrino signal; its main sources are cosmic rays and natural radioactivity. To eliminate the first of these factors, the detector was placed in the Gran Sasso Underground Laboratory. The thick layer of rock that shields it weakens cosmic radiation by over a million times (except for neutrinos that penetrate the Earth without obstruction).

To minimize the effects of natural radioactivity, the BOREXINO detector is built in an onion-like shape; its successive layers towards the centre have an increasing radio-purity. The central 300 tons of the so-called liquid scintillator, in which we observe the interactions of neutrinos, are practically free from radioactivity, which has never been achieved in any other experiment and which opens the possibility of registering CNO neutrinos.

Co-author of the publication which appeared in the journal Nature, Dr. Grzegorz Zuzel from Jagiellonian University, said: “The concentration of radioisotopes in the 300 tons of liquid scintillator, in which solar neutrinos are registered, is over 18 orders of magnitude lower than in table mineral water. It is the globally purest known material in terms of the content of radioactive isotopes.”

Dr. Marcin Misiaszek, who with Dr. Anna Jany, is responsible for the analysis and management of the data sets from the experiment, added: “In addition to the unprecedentedly low detector background, the measurement of the CNO neutrino flux required using advanced and innovative software methods of data analysis.”

Dr. Misiaszek is the author of innovative software methods that distinguishes between signals generated by neutrinos and other sources.

The existence of the CNO cycle in the Sun was predicted as early as 1938, independently by Hans Bethe and Carl von Weizsaecker. In this cycle, carbon, nitrogen, and oxygen nuclei were to act as catalysts in a series of nuclear reactions in the Sun leading to hydrogen burning into helium, along with hydrogen fusion in the main PP chain.

Despite indirect evidence from astronomical and astrophysical observations, direct experimental confirmation of CNO energy production in stars has not been easy. Only the development of neutrino astronomy, initiated by R. Davis in the 1960s, and its spectacular success in the field of solar physics and particle physics (three Nobel prizes), made it possible to confirm the occurrence of the CNO cycle based on neutrinos emitted in individual reactions.

The BOREXINO experiment, which is close to finalizing its scientific program, has not only uncovered the details of the Sun's functioning, but leaves a lasting legacy in the field of neutrino physics by observing the PP and CNO neutrinos for the first time.

The scientists said: “This revolutionary achievement, obtained as a result of an impressive experimental effort, will remain one of the fundamental successes in the field of astrophysics and particle physics.”

The research carried out as part of the BOREXINO experiment by the group from the Institute of Physics of the Jagiellonian University is financed by the National Science Centre under the Harmonia and Sonata-bis programmes.