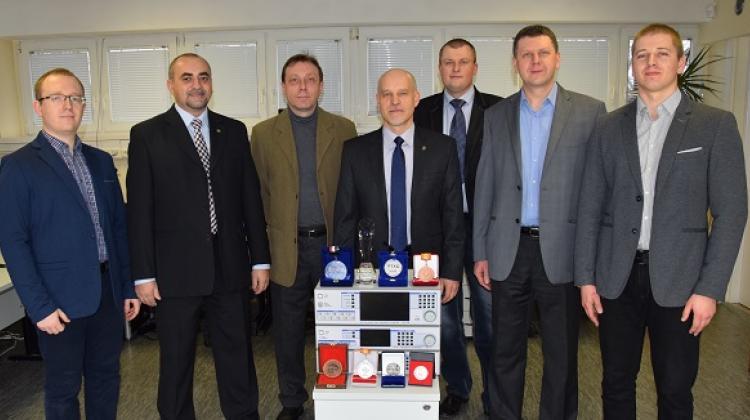 The Military University of Technology has commercialised devices for very accurate time measurement. The Polish company KenBIT has purchased a license and will manufacture a metrological system consisting of a multi-channel timer, a generator of standard time periods and a splitter transmitting signals between multiple devices.

The flow of time cannot be stopped, making it difficult to imagine what a picosecond precision is. Scientists propose to compare it to distance measurement.

“Such precision allows us, for example, to measure the distance from the Earth to the Moon (384,000 km) with an error of less than half a millimetre. In the time domain, in order to obtain the assumed precision, we divide the second into a million parts, and then divide each of these parts into a million parts,” explains Professor Ryszard Szplet, Dean of the Faculty of Electronics of the Military University of Technology.

The devices commercialised by his team at the Department of Digital Technology achieve such precision. Only a few manufacturers inhabit the niche of highly precise time measurement. However, no research group in the world has yet developed a set with such functionality. Polish suppliers make 'top' equipment for very specialized applications.

The methods used in the devices and their design have been patented by researchers from the Military University of Technology. The measuring system is versatile, its three components can be used as separate devices.

“The users interested in measuring time segments only will acquire a multi-channel timer. If, on the other hand, someone has a need to generate model time periods, there is an option to only buy the generator. On the other hand, a user interested in distributing electrical or optical signals to several receivers will choose a signal splitter.” explains Professor Szplet.

He says that the precise time counters are used in many research laboratories around the world. They are used at the International Bureau of Weights and Measures BIPM in Sevres, France, at the US Naval Observatory, at the US Space Agency NASA, at the PTB National Metrology Institute in Germany. In Poland, they are at the Central Office of Measures, at the Astrogeodynamic Observatory of the Space Research Centre of the Polish Academy of Sciences and the National Institute of Telecommunications - the State Research Institute.