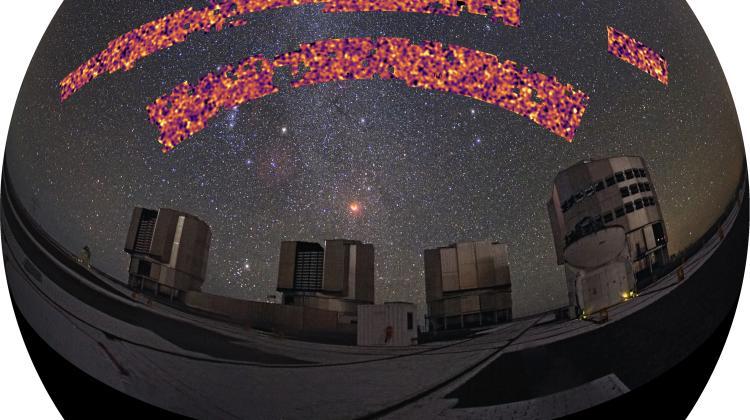 A map from the KiDS survey projected onto the sky shows 'ripples' in the distribution of matter in the far Universe, imaged by gravitational lensing. The smallest visible spots are approximately 30 million light years in size. In the foreground is the Paranal Observatory, home to the VLT Survey Telescope. Credit: B. Giblin, K. Kuijken and the KiDS team. Foreground panorama: ESO/Y.Beletsky CC BY 4.0.

A new map of the universe has revealed it is almost 10 percent more uniform than the standard cosmological model predicts.

Based on the Kilo-Degree Survey (KiDS) the map covers 1,000 square degrees, which corresponds to 5 percent of the sky available for cosmological observation. The analysis included 31 million galaxies, the farthest of them 10 billion light years from Earth.

The international team including Dr. Maciej Bilicki from the Center for Theoretical Physics of the Polish Academy of Sciences in Warsaw made the discovery using the OmegaCAM camera mounted on the VLT Survey Telescope (VST) at the Paranal Observatory in Chile, part of the European Southern Observatory (ESO).

The KiDS Sky Survey observes galaxies to create maps of the distribution of matter in the Universe. Scientists use the weak gravitational lensing phenomenon. Light from distant galaxies is slightly bent on its way to us by gravitational fields generated by large clusters of matter, such those as in galaxy clusters. On this basis, scientists can conclude how strongly matter accumulates on the largest cosmic scales. This applies to all matter occurring in the Universe, both ordinary matter and invisible dark matter, which constitutes the vast majority of matter in space.

With the passage of time, due to gravitational interactions, matter forms clusters and thus the universe becomes less and less uniform. At the same time, we know that the Universe expands, which slows down the formation of such clusters. Both processes are governed by the laws of gravity, so studying them is necessary for validating the standard cosmological model called Λ-CDM. This model fairly accurately predicts how the distribution of densities of matter should change during the evolution of the Universe.

Dr. Maciej Bilicki from the Center for Theoretical Physics of the Polish Academy of Sciences in Warsaw said: “The Λ-CDM model, or Lambda-Cold Dark Matter, is a standard cosmological model, which we adopt as valid on the basis of the consistence of various, independent measurements, thanks to which we know the current and past pace of expansion of the Universe and the matter-energy budget it contains.

“These measurements show that, firstly, most (85%) of matter is +dark+, which means that it does not interact with light (it does not shine, does not reflect or absorb light), and we know about its existence thanks to its gravitational interaction observed from the scales of single galaxies to the large-scale structure in the Universe. Secondly, the Universe has not only been expanding for about 14 billion years (since the Big Bang), but for several billion years this expansion has been accelerating.

“According to Einstein's general theory of relativity (which says how the Universe should evolve), in the simplest case, the so-called cosmological constant, usually denoted by the letter Λ (Greek Lambda) is responsible for this accelerating expansion. We also call it dark energy, to distinguish it from matter, which would slow the expansion due to its own gravity. In the cosmic matter-energy budget, dark energy currently dominates. We don't know why, nor do we know what dark energy and dark matter physically are. These are some of the greatest mysteries of modern physics.”

He added that the discrepancy concerns the measurement of the 'degree of densification of matter' in the largest scales. This quantity is measured independently from cosmological weak gravitational lensing, and more indirectly by precise measurements of the properties of the microwave background radiation.

For several years, we have seen that these two methods do not give consistent values, the researcher explains. In particular, the measurement from KiDS differs from that provided by the Planck satellite. The situation is similar to the Hubble constant, where the 'direct' measurements also deviate from the Planck results, although the discrepancy there is much greater than in the case of the degree of uniformity of the Universe.

Bilicki said: “In both cases, the direct methods are getting more and more accurate, that is, their measurement errors gradually decrease. Hence, these discrepancies become more and more intriguing. We believe that our measurements are carried out correctly, so maybe the problem lies in their incorrect interpretation - maybe our cosmological model should be modified?

“We do not know the answer to this question yet, but we do know that such a modification would be extremely difficult, because numerous independent measurements have been confirming this model for many years.”

The final KiDS maps are expected to be published in the next two years and cover 30 percent more of the sky than today.