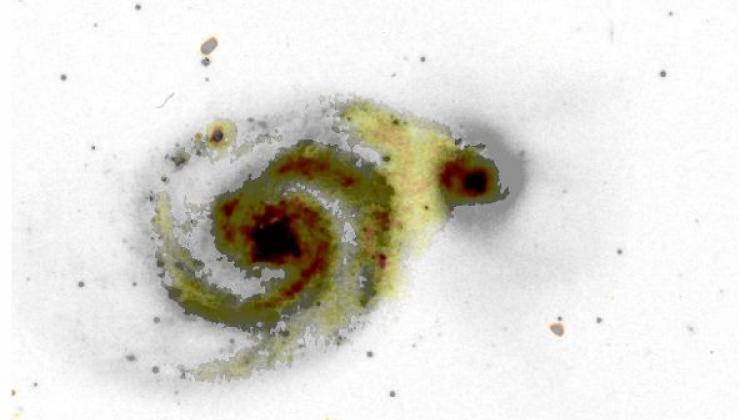 This image shows the Whirlpool Galaxy (M51). It is 15-35 million light years from Earth and around 60,000 light years in diameter. At the centre of the spiral galaxy there sits a supermassive black hole. With the LOFAR data (yellow and red hues), we can see that the spiral galaxy and its companion are interacting because there is a bridge of emission joining them. Source: Sean Mooney/LOFAR Surveys Team/Digitized Sky Survey

An international team of astronomers from 18 countries has published a new sky map that shows hundreds of thousands of previously undetected galaxies. Researchers from the Jagiellonian University and the Nicolaus Copernicus University participated in the project.

The Jagiellonian University informed about the astronomers` results in a press release.

The new radio sky map reveals hundreds of thousands of previously undetected galaxies and sheds new light on many research areas including the physics of black holes and the evolution of galaxy clusters. The data, on the basis of which the new sky map was created, come from the first phase of a major radio sky survey at unprecedented sensitivity. It is conducted with the Low Frequency Array (LOFAR) telescope.

According to the Jagiellonian University, a special issue of Astronomy & Astrophysics devoted to the new results will contain twenty-six research papers describing the survey and its first results. 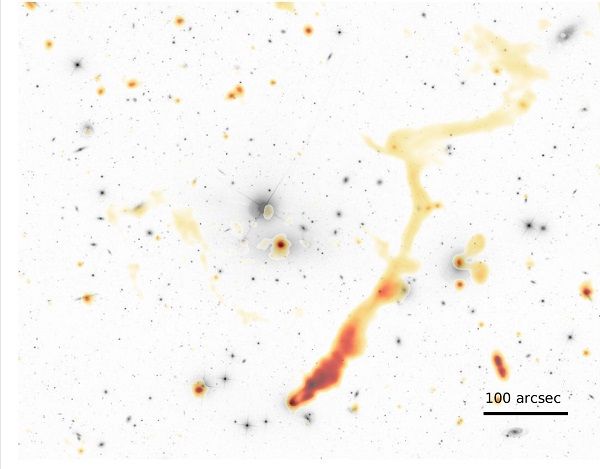 This image shows how the LOFAR radio telescope opens a new view of the universe. The image shows galaxy cluster Abell 1314. In shades of grey, a piece of the sky can be seen as we know it in visible light. The orange hues show the radio emitting radiation in the same part of the sky. The radio image looks completely different and changes our assumptions about how galaxies arise and develop. These objects are located at a distance of approximately 460 million light years from earth.In the middle of every galaxy there is a black hole. When matter falls into it, an unbelievable amount of energy is released and electrons are ejected like a fountain. These accelerated electrons produce radio emission that can extend over gigantic distances and is not visible at optical wavelengths. Source: Rafaël Mostert/LOFAR Surveys Team/Sloan Digital Sky Survey DR13

Radio astronomy allows to see the processes in the universe that cannot be seen with optical instruments. In this first part of the new sky survey, LOFAR observed a quarter of the northern hemisphere at low radio frequencies (below 250 MHz, waves over 1 meter). At this point, approximately 10 percent of that data has been published. The data contain 300,000 radio sources, almost all of which are distant galaxies, whose radio signals have travelled billions of light years to reach Earth.

Polish scientists from Kraków and Toruń participated in data processing.

"We have identified and completed morphological classification of thousands of radio sources in the survey" - explains Krzysztof Chyży from the Astronomical Observatory of the Jagiellonian University. "We were looking for the reasons of the radio emission dependence on star-forming activity of spiral galaxies, we analysed the escape processes of cosmic ray particles from galaxies and searched for intergalactic magnetic fields. In addition, one of the papers - concerning the prevalence of prolonged radio emission in galaxy clusters, an issue so far poorly understood, was a project of one of the scientists employed at the Astronomical Observatory of the Jagiellonian University" - he says.

"Scientists from Toruń were also actively involved in creating this huge catalogue of radio sources. We also analysed the origin of radio emission in very rare quasars, which are characterized by very strong outflows of matter from the accretion disk surrounding the supermassive black hole (so-called BAL quasars with broad absorption lines) "- adds Magdalena Kunert-Bajraszewska from the Nicolaus Copernicus University in Toruń.

The International LOFAR Telescope consists of a European network of radio antennas connected by a high-speed optical network extending across seven countries. LOFAR was designed, built and is operated by the Netherlands Institute for Radio Astronomy - ASTRON, and its central part is located in Exloo in the Netherlands.

The goal of LOFAR research team is to create high-resolution maps of the entire northern sky. This should allow to show 15 million radio sources, including the oldest known black holes.

As the researchers quoted in the press release explain, we know that black holes are messy eaters. When gas falls onto them, they emit jets of material that can be seen at radio wavelengths. "If we take a radio telescope and we look up at the sky, we see mainly emission from the immediate environment of massive black holes. With LOFAR, we hope to answer the fascinating question: Where do those black holes come from?" - says Huub Röttgering from Leiden University.

"LOFAR has a remarkable sensitivity and that allows us to see that these jets are present in all of the most massive galaxies, which means that their black holes never stop eating" - adds Philip Best, University of Edinburgh.

Astronomers also point out that LOFAR allows to detect more galaxies than before. It has been known for decades that when two clusters of galaxies (containing from hundreds to thousands of galaxies) merge, they can produce radio emissions spanning millions of light years. This emission is thought to come from particles that are accelerated during the merger process. Meanwhile, LOFAR allowed observe that in some cases clusters that are not merging are also the sources of such emissions. 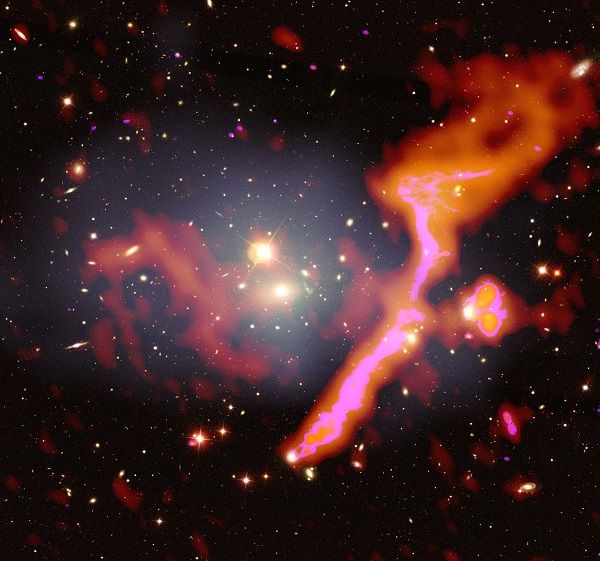 The galaxy cluster Abell 1314 is located in Ursa Major at at distance of approximately 460 million light years from earth. It hosts large-scale radio emission that was caused by its merger with another cluster. Non-thermal radio emission detected with the LOFAR telescope is shown in red and pink, and thermal X-ray emission detected with the Chandra telescope is shown in grey, overlaid on an optical image. Source: Amanda Wilber/LOFAR Surveys Team/NASA/CXC

"What we are beginning to see with LOFAR is that in some cases, clusters of galaxies that are not merging can also show this emission, albeit at a very low level that was previously undetectable" - notes Annalisa Bonafede, University of Bologna. "This discovery tells us that besides merger events, there are other phenomena that can trigger particle acceleration over huge scales" - the researcher adds.