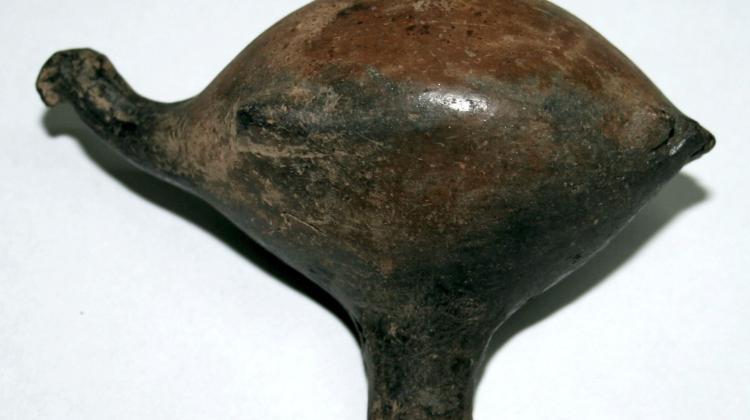 One of the tested rattles - Lusatian culture. From the collections of the District Museum of the Kalisz Land in Kalisz. Photo by Katarzyna Tatoń

Rattles, clankers and bells found by archaeologists in Poland and dating back several thousand years could produce ultrasound, researchers have found in a study.

Musicologists made their discovery after carrying out an analysis of musical instruments being held in museum collections.

Prof. Anna Gruszczyńska-Ziółkowska from the Institute of Systematic Musicology at the University of Warsaw, leader of the project funded by the National Programme for the Development of Humanities, said: "In the case of many medieval rattles, the main frequencies of their sounds - those with the highest intensity - are in the 18-20 kHz range and above, and thus above the limit of human hearing. So we can talk about the specific ultrasound of these objects.”

She added that older instruments (for example from the Bronze Age) also emit sounds at very high frequencies, but slightly lower than the medieval ones, about 7-10 kHz.

The researchers also found the same applied to many other instruments subjected to analysis, such as clankers or bells, also from different periods. In total, researchers tested several hundred idiophones - musical instruments that create sound primarily by the instrument as a whole vibrating.

Prof. Gruszczyńska-Ziółkowska said: ”This observation surprised us. The sound of these instruments, especially the quiet rattles, seems unattractive to us. But it turns out that the only reason is because of the limits of our hearing. We simply do not hear these sounds fully. We assume that achieving these particular sounds were the intention of the creators of these objects.

"Today we are not able to accurately determine their function. It will be the subject of further research," she said, adding that it could be associated with the animal world since the frequencies detected by scientists are also heard and recognized by many animals.