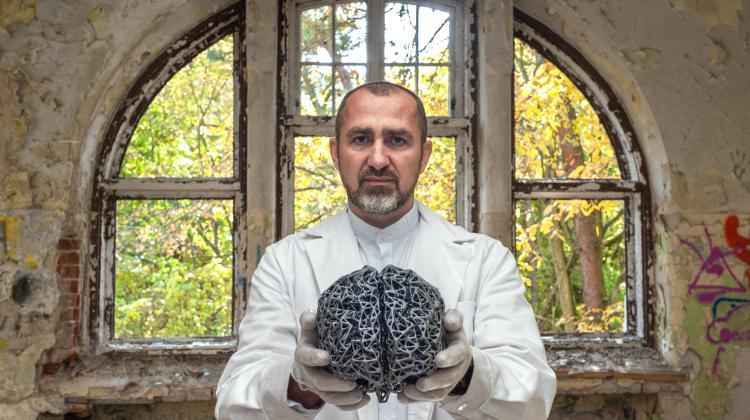 Despite many years of research, Alzheimer's disease remains incurable. The goal of the research group with the participation of doctoral student Dusan Mrdenovic from the Institute of Physical Chemistry PAS is to decipher the mechanisms leading to its development. The team leader, Dr. Piotr Pięta, poses for a photo in an abandoned psychiatric hospital. (Source: Institute of Physical Chemistry PAS, Grzegorz Krzyżewski)

Researchers from the Institute of Physical Chemistry PAS have shown how the size of particles composed of beta-amyloid, a substance known to be the "culprit" in Alzheimer`s disease, modifies the course of the disease. Thanks to their research, new, more effective drugs for Alzheimer`s can be created.

According to estimates given at the Polish Ombudsman`s conference in September in Warsaw, over 300,000 in Poland people live with Alzheimer`s disease, and their number will triple in 30 years. However, there is still aren`t any effective drugs for such patients. This could change thanks to research conducted at the Institute of Physical Chemistry of the Polish Academy of Sciences in Warsaw.

Scientists from Dr. Piotr Pięta`s team showed how the size of beta-amyloid particles affects the way they interact with cell membranes, and consequently how it modifies the course of Alzheimer`s disease. The next step is to test potential drugs in this model.

Researchers from the Institute of Physical Chemistry PAS work on synthetic, model cell membranes, built as simply as you can imagine, but at the same time similar to those found in the human brain. These membranes consist only of a mixture of phospholipids (without receptors and other membrane proteins) and thus allow researchers to focus solely on how various molecules affect the barrier ensuring cell stability, according to the institute`s press release sent to PAP.

He adds that the answers to these questions are just emerging. "We managed to control the size of oligomers, small molecules composed of several amyloids, and thanks to this we were able to check how this size affects the mechanism of their interaction with the model membrane," Dr. Pięta describes. In the early studies of Alzheimer`s, the brains of the sick were examined, and more precisely the brains of the people who had already died of this disease. Deposits of long strands - fibrils - were found in the brains and for many years it was thought that these fibrils were the main pathogenic factor. Recent studies, including those conducted by Dr. Pięta, show something different. It is not the long fibrils that are the culprit, but rather their precursors, beta-amyloid oligomers.

Amyloids are produced continuously in all of us from membrane proteins; are enzymatically cleaved. The problem occurs when the mechanisms regulating their number and "appearance" fail, researchers remind in the release.

According to the researchers, non-toxic amyloids contain 39-43 amino acids, and their secondary structure is an alpha-helix (the shape somewhat reminiscent of a DNA chain). The "bad", changed ones, resemble a harmonica. The worst are those that have 42 amino acids.

When deposited on the membrane, large oligomers aggregate to form long fibrils. All phenomena with their participation occur on the surface of the model cell membrane and do not lead to its destruction.

Dr. Pięta explains that both small and large oligomers are toxic, but their mechanism of action is different. "Our research explains these mechanisms and reconciles conflicting reports published in the literature," he points out and notes that for now his team is working on explaining only the basic mechanisms.

"But in the next stage of our research, we will add drug molecules to this system and check which of them can modify the interaction of amyloid with the membrane, and thus, perhaps, the course of the disease. We will undertake research on molecules that could, for example, deactivate beta-amyloid by attaching to it before it destroys the membrane," he says.

He adds that the team has already begun cooperation with pharmacists and biochemists. "We can suggest whether their drugs interact with amyloids, and if so, at what level and how they should behave, e.g. to increase the durability of the cell membrane," the scientist concludes.