Leftovers from Thrush Table a Source of Supplements for Other Birds 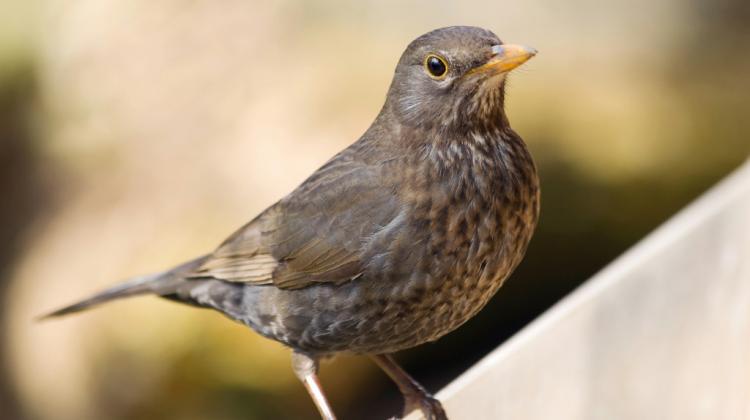 Nothing goes to waste in nature. Snail shells, leftovers from a thrush feast, are a valuable find for birds of other species. Especially for females during the breeding season, which, by eating them, supplement calcium, necessary for the production of eggs.

While walking in a park, forest or garden, an attentive observer will easily notice clusters of debris resembling ceramic flakes or paint splashes. These are places of feast of birds, and the debris are fragments of snail shells. "If you knows what to look for, you`ll find it in five minutes. Usually there are larger or smaller stones with a lot of crumbs near them, which turn out to be fragments of banded snail shells - yellow, brown and pink," says Dr. Zbigniew Kwieciński from the Adam Mickiewicz University in Poznań.

These shells are the remains of a meal of song thrushes, and sometimes also blackbirds that look for banded snails of the genus Cepaea. To get to the "meat", birds break shells on stones or bottles in the forest. Zoologists call places of such processing "forges".

Scientists already knew about thrush forges. "However, it was not known how important they could be for other bird species," says Dr. Kwieciński, the lead author of the study devoted to this phenomenon.

When scientists realized that the forges attracted various birds, they began to monitor these places. Over the period of seven years they visited 64 forges around Poznań and Odolanów and discreetly checked which birds appeared there. The forges were very popular: they were visited by almost 2.5 thousand individuals of 55 species. They were mainly small species, such as blue tit, great tit, pipit and blackbird.

"Many species of birds use thrush forges. It seems to be a common phenomenon, and nobody described it before," notes the co-author of the paper, Prof. Piotr Tryjanowski from the University of Life Sciences in Poznań.

What`s more, it turned out that females in the period before the broods appeared in the forges most often. The authors of the study suggest that the use of this "dietary supplement" translates into breeding success.

"It`s not like the birds randomly use snail shells. Wherever it is possible to distinguish the sex of the species, it can be seen that during the breeding period, females do it more often in order to compensate for calcium losses from their organism. In nature, not only protein is not wasted, but calcium as well. In many places it is a deficit element, and a crucial one for bird reproduction, because it is part of the shell of eggs," emphasises Prof. Tryjanowski.

He adds that hard shells are also eaten by males, in whose stomachs they can act as gastrolytes (small stones that grind food and aid digestion); they may also have anti-parasitic functions.

The authors of the publication also pose further questions. Dr. Kwieciński points out that over 90 percent birds are "calcium eaters" who are unable to obtain calcium for shells from their own body (e.g. from bones) and must supply it with food. "We know that birds eat fragments of snail shells. But we do not know to what extent calcium carbonate from the shells is broken down and absorbed by bird organisms," he says.

Dr. Kwieciński also reminds about the work of Finnish scientists who checked the level of calcium in an environment contaminated with cadmium and lead. They found that calcium availability is crucial not just for bone or shell structure; its presence is also important in the egg itself, for the health of the embryo. "When there is a shortage of calcium in the food or in the environment, then lead and cadmium are built into so-called bridges, or protein compounds that transport calcium. And they poison the embryo," says Dr. Kwieciński. He emphasises that this is a "complex defence system and it is worth understanding it better also in the context of our health. To prevent heavy metals from entering the body, you need to have balanced calcium levels." (PAP)