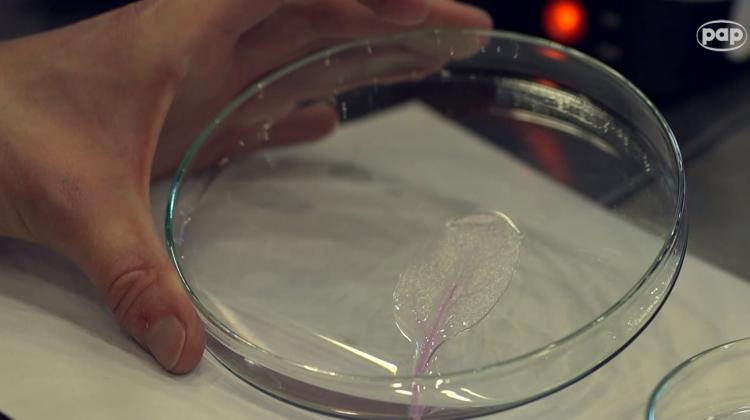 Stanisław Łoboziak from the Copernicus Science Centre, who developed this unique vegetable-animal delicacy, describes the taste of this dish. "The consistency resembles seaweed, it has a slightly salty aftertaste. It doesn`t taste like spinach, nor does it taste like chicken. It`s a completely new taste", he says.

He explains that to prepare the product, a cellulose skeleton of spinach leaf was used, on which chicken muscle cells were placed. "We threw about 2 million cells onto one leaf. That`s a lot", he says. He adds that probably not all of them have nested on the leaf.

"The time of growing such a leaf is about three weeks, which is faster than breeding chicken", he reports.

Łoboziak explains that to grow meat in the laboratory, it is not necessary to slaughter the animal from which the cells are taken. According to the researcher, for such an experiment, it is enough to collect a cell sample the size of a pinhead or a pencil tip from a live animal.

By preparing cell-cultured meat, the Copernicus Science Centre shows that in the future it will be possible to obtain meat without animal suffering.

"Meat leaves" grown in the Polish laboratory can be seen at the Copernicus Science Centre until October 6 as part of the Transformations Festival. Łoboziak notes that Copernicus visitors are not allowed to taste this dish. There are no regulations in Poland that would regulate the possibility of serving such dishes to people.

Director of the Copernicus Science Centre Robert Firmhofer explains that this year`s edition of the Transformations Festival focuses on the theme of the future of food. "Food is associated with the problems of climate change, loss of biodiversity, issues that affect our health. In 15-20 years it will be very, very difficult for us to feed all people who are likely to live on Earth. We must look for other innovative methods of nutrition, which requires not only understanding the current achievements of biotechnology, but also busting myths, superstitions and changing attitudes", comments Robert Firmhofer.