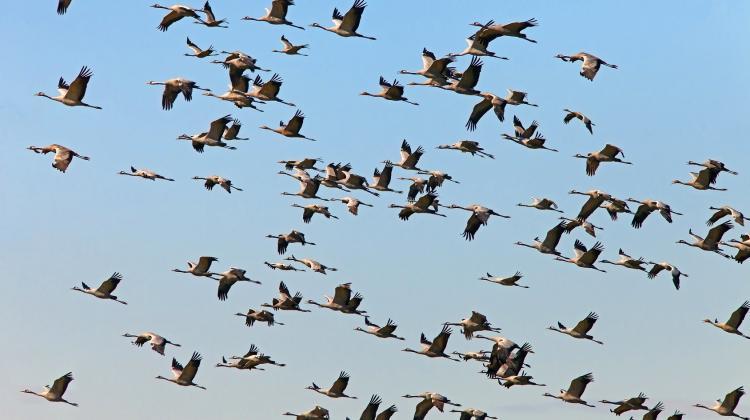 In autumn and spring, at least 130 species of birds migrate over the territory of Lebanon, including storks, pelicans and birds of prey. It is a paradise for observers, says Dr. Ireneusz Kaługa from the EcoLogical Group. In his opinion, the development of nature tourism in the region may support bird protection.

Lebanon is located on one of the two most important seasonal bird migration routes between Europe and Africa. It is an air corridor, in which a great nature show takes place twice a year - the flight of millions of birds. And, also twice a year, a great slaughter follows. It is committed by poachers and pseudo hunters; amateurs who know nothing about hunting and consider hunting a form of entertainment. These people kill hundreds of thousands of birds from many protected species. Such "hunts" are a fairly common phenomenon in the countries of the Middle East, Africa and even southern Europe. Birds are killed in Egypt, Italy, Syria, Greece, France, Libya, Albania - and in Lebanon.

But some believe that the dramatic situation of birds can change, and the effect is achieved in many small steps. Polish and Lebanese natural scientists, in cooperation with the Polish Embassy in Lebanon, take active measures to protect migrating birds. For several years, they have been organising educational campaigns in Lebanon, addressed especially to young people. They also organized a photo competition; its winner came to Poland for stork ringing.

According to the initiator of these activities, the President of the EcoLogical Group from Siedlce, Dr. Ireneusz Kaługa, the development of birdwatching tourism can help to protect migrating birds. Autumn and spring bird migrations are a great time to organize trips for Polish and European nature lovers, who would like to participate in observations of this phenomenon.

"It is an ornithologist`s paradise. A large species migration route leads over Lebanon, not to mention all the small birds. Predators are particularly interesting: tens of thousands of honey buzzards, lesser and greater spotted eagles, all harrier species, steppe buzzards, falcons, kites, not to mention storks, cranes, pelicans... 130 species of migrating birds, African and European species, have been spotted there "- says Dr. Kaługa.

The expert explains that Lebanon is located on one of the two main bird migration routes between Africa and Europe. The western route stretches through Spain and includes Tarifa - a point on the edge of the Los Alcornocales National Park in Gibraltar. During the migration season, birds of over 400 species fly there. "This is where observers from around the world come to admire the spectacle of nature. It is a well-developed place: there are observatories, guides. And now the idea is to nurture the seed of a similar movement in Lebanon" - the researcher says.

Due to the location of Lebanon and a hilly terrain, it is a great place for birdwatching. "You just need to choose the right observation spots. I think that with the participation of locals, it can be organized well - and people can go there during the right period, for example at the turn of October" - he says.

The representative of the EcoLogical Group emphasizes that the initiative has an educational value and can play a role in changing the attitude of local people towards bird protection.

"This is expected to draw attention to the benefits of birdwatching. We hope that the Lebanese will understand that the location of their country on the route of bird migrations is a privilege and a form of capital, and the associated ornithological tourism can bring many benefits. We assume that it will draw their attention from shooting and encourage the protection of migratory birds, that organizers of ornithological trips will engage in combating illegal hunting. This is an important educational component that may save many migratory birds" - emphasizes the researcher from Siedlce.

The first tourist offers have just appeared. The EcoLogic Group received Initial offers of Lebanese tourist offices for several-day stays combined with observations through the Polish Embassy in Beirut, also involved in activities for the protection of migratory birds.

"This is new. So far, Lebanon has been known among Polish travellers as a place of pilgrimage in the footsteps of the saints, visiting places associated with the beginning of Christianity, or trips for history lovers (for example to the city of Byblos, associated with the creation of the Phoenician alphabet, the basis of the modern alphabet). In this respect, the trail is already paved. As for ornithologists - there have been no offers until now" - says Dr. Kaługa. He adds that Lebanon, located by the sea, is a paradise not only for bird lovers, but also botanists or hiropterologists (bat researchers). It would be great to start any kind of nature-related activity there.