Wolves also give the best pieces to children 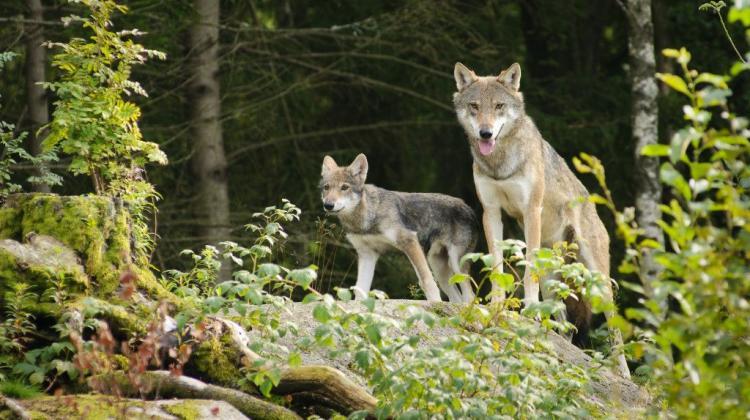 Wolves are caring parents - they save the best bits for their pups, shows research conducted in the Drawsko Forest. Interestingly, a wolf rescued from death in poaching snares helped learn the details of wolf pups` diet.

The composition of the wolf diet has been studied in various parts of Poland and in other countries. It is known that the basis of their diet in Poland are wild ungulates, usually accounting for more than 90% weight of consumed food. Wolves usually prey on deer, roe deer and wild boars, although they are also able to kill an elk. Their diet is complemented by smaller animals including beavers and hares, sometimes badgers, they very rarely eat rodents.

Previous studies of scientists focused on the diet of adult individuals for a simple reason: it is difficult to find places where pups are being brought up. Therefore, the researchers did not have access to the material, wolf pup`s droppings, the authors of the latest wolf diet study, researchers from the Faculty of Biology of the University of Warsaw, Association for Nature "Wolf" and members of the West Pomeranian Nature Society note in the materials sent to PAP.

A coincidence helped unravel the mystery of wolf pup diet. In February 2015, a male wolf trapped in a snare was found near Dobiegniew in the Drawsko Forest. The animal was freed by employees of the West Pomeranian Nature Society, and before being released it was fitted with a telemetry collar. The GPS transmitter hidden in the collar sent information about the location of the wolf.

The data from the collar were supplemented with recordings from photo traps installed in the forest by members of the Association for Nature "Wolf". Thanks to this, researchers learned that two months later, the wolf freed from the snare became a happy father of four puppies. When the rearing period ended and the wolves left their dens, the researchers collected pup droppings and additionally analysed the faeces of adult animals.

Research conducted in collaboration with scientists from the Faculty of Biology of the University of Warsaw showed an interesting pattern. Adult wolves would mainly eat wild ungulates: deer, wild boar and roe deer, which constituted as much as 95 percent biomass of their food. Meanwhile, in the diet of puppies, in addition to wild ungulates, there was a large (almost 20 percent) share of beavers.

"It appeared as if the wolf parents consciously saved the best delicacies for their pups" - says the lead author of the paper, Dr. Robert Mysłajek from the Institute of Genetics and Biotechnology, Faculty of Biology, University of Warsaw.

"The wolves` taste for beavers is an important ecosystem service for people. In Poland, the State Treasury pays the highest compensation amounts for damages caused by beavers. By eating them, wolves naturally reduce the problems resulting from the presence of these amphibian rodents" - adds the research co-author Dr. Sabina Nowak from the Association for Nature "Wolf".

The results of the research project were published in the journal Ethology, Ecology & Evolution.