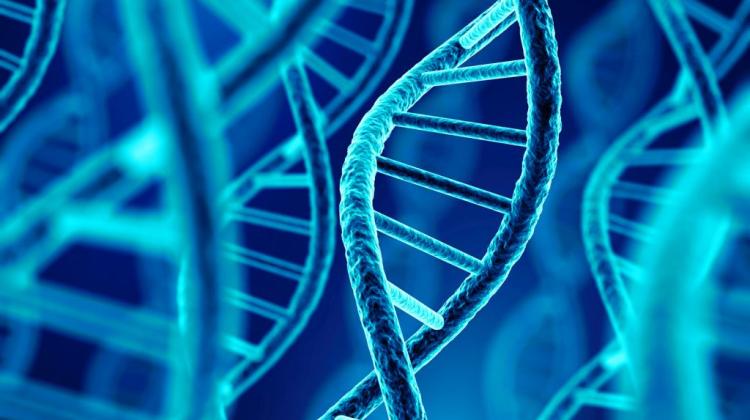 Preliminary research results suggest that people living 2000 years ago in the territories of today\'s Poland were not an isolated group; it does not appear that their DNA was significantly different from the DNA of populations living in the same period in western Europe - report researchers from Poznań, working on the genetic "portrait" of our ancestors.

Genetic portrait of the former inhabitants of the territories of today\'s Poland is being investigated by researchers from the Poznan Center for Archeogenomics, working under the supervision of Prof. Marek Figlerowicz from the Institute of Bioorganic Chemistry PAS.

They conducted preliminary analysis of the genomes of about one hundred people, whose remains come from the Wielkopolska cemeteries. Data from the analyses were compared to similar results on the former inhabitants of Western Europe. All indications are that the DNA of people living two thousand years ago in today\'s Polish territory is no different from the genetic material of populations present at the time in Germany, France or Denmark.

"The results surprised us. Up until now, the prevailing view was that the areas stretching between the Vistula and the Odra were inhabited by a handful of people, small isolated communities living deep in the forest, without extensive contacts with the outside world" - told PAP Prof. Marek Figlerowicz.

"This is one of the more fascinating projects I have been involved in throughout my career, as it combines biological and historical research" - he emphasized.

Archaeologists have long had evidence that in the early centuries of our era the present lands of Poland were in orbit of the Roman Empire. It is known, for example, that amber, valued in the Mediterranean, was exported to the South. In return, local merchants received Roman coins, luxury ceramics, metal utensils and glass beads - now found in graves in Poland.

"It seems that the scale of contacts with other people, including those behind the western +border+, was broader than previously thought" - added the researcher.

Study of the genome of people living in Poland 2 thousand years ago was one of the elements of a large-scale research project that also involves historians and archaeologists. Experts want to find out how the Polish state was formed. They want to know whether or not outlanders were involved in the process (for example Scandinavians - as some historians suggest).

To find that out, scientists extract DNA from the remains of people belonging to four groups: the community living 2000 years ago, the elites of the early Piast era (X-XI century), ordinary people from the times of the formation of the Polish state - and from the members of the Piast dynasty.

"The biggest problem is the collection of genetic material from the first rulers of Poland. I was convinced that we would easily collect DNA because we had initially created a list of Piast burials in Poland and abroad" - said Prof. Figlerowicz.

The confrontation with reality proved to be painful for scholars - so far, it has not been possible to examine a single grave where a male representative of the Piast dynasty would certainly rest. Tombs often turn out to be completely destroyed, the remains there - mixed, moved to new coffins, placed in bags or in a very bad condition. A woman was found in a coffin where one of the Piast princes was supposed to rest. In another grave, after opening the coffin researchers found two skeletons...

The hope of scientists lies in the study of the graves of Władysław I the Elbow-high and Casimir the Great at Wawel. "All indications are that these are the best preserved graves of members of the Piast dynasty. It is important that such graves are the source of DNA that can be used as a template to identify other members of the family" - the scientist said.

So far, researchers have succeeded in sequencing more than a dozen genome samples from people who may have been members of the Piast dynasty.

For geneticists it is crucial to obtain the template Y chromosome, which determines male sex. Men belonging to one family have the same Y chromosome. By obtaining it, the scientists will be able to tell if the next graves contain the remains of the Piasts.

Activities on Wawel require special permission (scientists are waiting for it). However, there are many indications that research conducted on this site may be a milestone in the project.

"I believe we will be able to identify the model Y chromosome, which is characteristic for the male Piast line. If we do that, we will be able to restore the identity to the remains that have lost it as a result of historical events or various thoughtless activities" - said the researcher.

As part of genetic material research, scientists sequence the DNA - that is, they try to determine the order of the nucleotides that form it. Complete human DNA, the so-called genome is present in each of our cells. Its total length is about 2 m.

The genomes of all people are very similar. However, by analysing certain fragments of a person\'s DNA sequence, experts may determine some of that person\'s physical features or origin.

What is the relationship of the communities from 2000 years ago - with the Piast state, which was formed only at the end of the first millennium AD? "Archaeologists have been arguing for years when the Slavs - from whom the Piasts originate - arrived in Poland. There are two main concepts: according to the first, Slavs they came to the Vistula in the 6th century from the Dnieper. According to the second concept, they had lived in the area for millennia" - said the scientist. Genetic research may shed light on this problem as well.

In the project "Dynasty and society of the Piast state in the light of integrated historical, anthropological and genomic studies" (financed by National Science Centre) Prof. Figlerowicz and his team mainly deal with DNA sequencing and analysis.

His undertaking may give rise to further interesting projects, concerning, for example, the reconstruction of the appearance of the Piasts. DNA research could theoretically allow to draw conclusions concerning the appearance of people, such as the colour of their hair and eyes or complexion. "It would be particularly exciting in the case of the Piast rulers, whose appearance is only known from portraits made hundreds of years after their death by Jan Matejko" - said Prof. Figlerowicz.