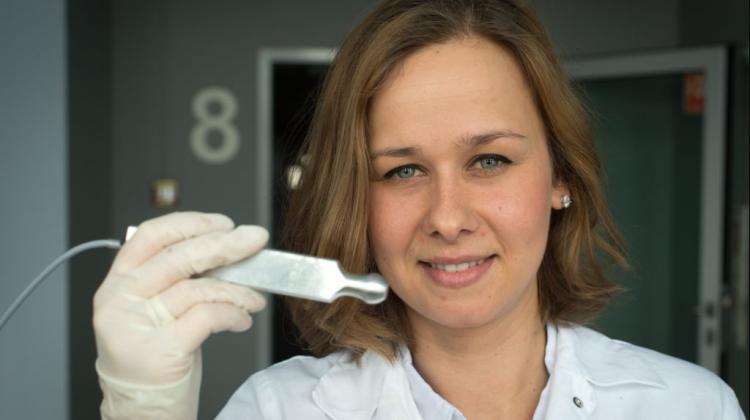 In the photo: Alicja Wolny, a PhD student at the Faculty of Chemistry, University of Wrocław. Photo: PAP/ Maciej Kulczyński 30.03.2015

Research into the development of an intraoperative probe, which compares the dielectric properties of normal and tumour tissues, has been initiated by Prof. Kazimierz Orzechowski, surgeon, oncologist Dr. Marek Rząca and Eng. Stanisław Baj. As a result of their research, a few years ago they managed to develop and patent a device capable of locating tumour tissue, which is used in the surgical treatment of breast cancer. This is the first such probe in Poland and one of the few in the world. The device is successfully used in the Regional Specialist Hospital in Wrocław and the clinics of the Medical University of Lublin.

Research initiated by Prof. Orzechowski’s team is continued by his doctoral student Alicja Wolny. "My research is aimed at improving this device" - Wolny told PAP.

The probe developed by scientists from Wrocław is an "extra eye for a surgeon". "Cancer surgeons operating breast cancer often face the problem of whether they were able to cut the entire cancerous tissue. Surgeon always try to remove the tumour with a margin of healthy tissue, to avoid leaving any cancer cells, but there is no certainty that the margins there are no affected tissue fragments left in the cut margin" - said Wolny.

The probe is separated from the operation area with sterile film, making the device completely safe for the patient and easy to use. The use of sterile film also allows for measurements independent of the presence of blood or lymph.

PhD student and a team from the University of Wrocław and the Research and Development Centre of the Provincial Hospital continue the research aimed at improving the probe. In the future, the device will also find applications in detecting cancer in axillary lymph nodes.

"There is currently no method, apart from histopathology, which would allow to determine lymph node condition during surgery. Typically, histopathological examination is carried out after the procedure, so if the surgeon fails to find all affected nodes, another surgery may be necessary. The upgraded probe would allow to see which lymph nodes are affected during surgery, and the surgeon could cut the entire tumour tissue and affected lymph nodes in one operation" - said the scientist.

The current device is a spot probe. Scientists want to develop a device that would scan the entire surface of the removed tissue. Work is also underway to improve the sensitivity of the probe. Currently, the device detects cancerous changes up to a depth of 5 mm.