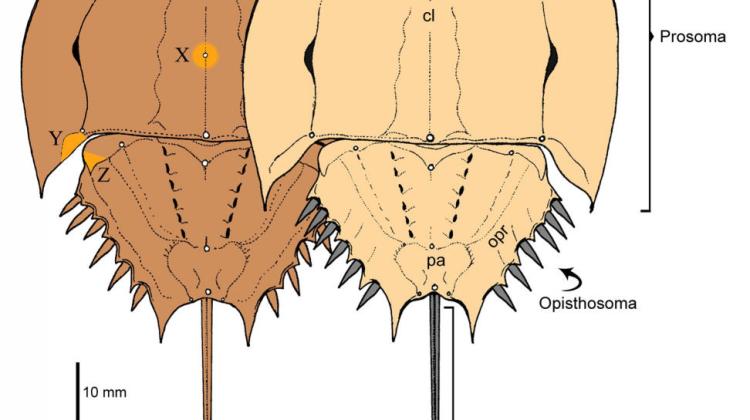 "Horseshoe crabs are unusual animals that live to this day. They are the subject of research due to their unique properties" - explained Dr. Błażej Błażejowski of the Institute of Paleobiology PAS. According to the scientist, horseshoe crab blue blood has very strong antibacterial properties. A concentrate made from isolated amoebocytes, the active ingredient in horseshoe crab blood, is used in medicine.

Horseshoe crab has a very characteristic build. "Their bodies are masterpieces of weapons of defense!" - the scientist said with amazement. These arthropods do not have clearly separate heads. A pair of large, complex eyes are positioned on the sides of the great, helmet-like head region called prosoma, with attached, smaller, triangular abdomen. "With two compound eyes located on both sides of the prosoma are, 5 eyes simple eyes on the carapace and two on the underside near the mouth horseshoe crabs see well even in the dark under water" - said Dr. Błażejewski.

The authors believe that evolutionary conservatism may also be associated with an extremely broad feeding spectrum of these animals and the ability to live in water with different temperatures and salinity, and even no salinity.

Observations made by the Polish palaeontologists have led to propose a new scientific term – stabilomorphism, understood as morphological stabilization of an organism in space and time, whose taxonomic status does not exceed genus-level. It is the result of a highly specialized adaptation strategy, which significantly reduces the need for diverse phenotypic variants, i.e. those that reflect the environmental impact on the body. Researchers have proposed the new definition for organisms on the genus level that survived at least one major extinction or biotic crisis and still live today. In addition to horseshoe crab, this group includes Araucaria and ginko plants.

"In our approach, certain genera, hitherto considered >>living fossils<< - like coelacanth, will lose their current status, as they have not survived a great extinction" - said Dr. Błażejowski.

Fossils were discovered in a unique Fossil-Lagerstätte (deposit of fossils) paleontological site, located in the quarry Owadów-Brzezinki owned by Nordkalk. In the 148 million years old, Upper Jurassic limestones researchers found many fossils of marine and terrestrial organisms in an exceptionally good state of preservation. In addition to horseshoe crabs, scientists also discovered numerous specimens of fish, shrimp and lobster, the remains of small marine reptiles, rare ammonites, as well as terrestrial insects and skeletal remains of pterosaurs.

Co-author of the article and the presented concept, and the discoverer of the site in the quarry Owadów-Brzezinki is prematurely deceased palaeontologist, Dr. Adrian Kin (1979-2012) from the Association of Friends of the Earth Sciences "Phacops".

The article has been published in open access scientific journal PLOS ONE.