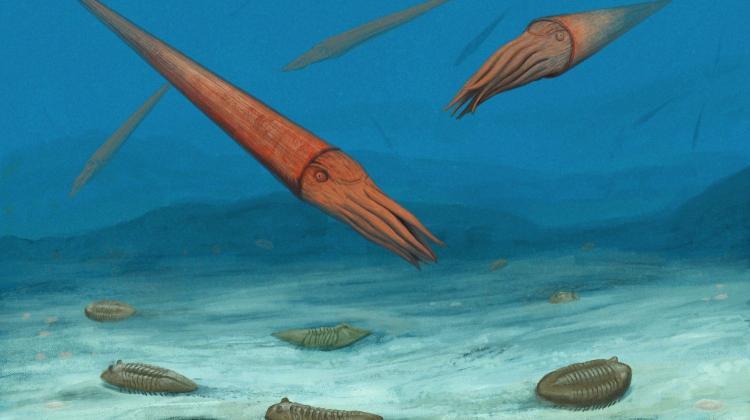 Fossilised nautiloids that lived approx. 480-460 million years ago can be seen in the Saint Hyacinth's church (of the Dominican Order) in Warsaw, credit: Edyta Felcyn

Historical monuments of Warsaw have a very rich history, counted not in hundreds, but in millions of years. In decorative stones, you can find fossils - the remains of animals from the distant past. Geologist Dr. Paweł Wolniewicz has prepared a route to view them.

There are a total of 9 objects on the route; mainly churches, but also the first column of the Sigismund III Vasa statue. Interesting fossils are visible mainly on stone blocks forming the floors of churches, but also on their walls. The route leads to the Field Cathedral of the Polish Army (the Church of Our Lady Queen of the Polish Crown), the Pauline Church of the Holy Spirit and the St. John`s Archcathedral.

The originator of the guide Dr. Paweł Wolniewicz from the Palaeontology and Stratigraphy Department at the Institute of Geology, Adam Mickiewicz University in Poznań, explains in an interview with PAP that the stones with visible remains of animals that lived millions of years ago come from quarries in Poland, Sweden and Germany. The creatures include ammonites, belemnites or giant mussels.

"They tell us what Poland and the world looked like millions of years ago. We are moving back to the time when Poland resembled today`s Australia, California and Palestine" - the geologist says.

According to the scientist, two hours spent in the Warsaw Old Town are enough to discover souvenirs from millions of years ago, hidden in stone floors and facades. The objects on the route are open to visitors without admission fees. The route is approximately 2-2.5 km long. The fossils mentioned in the guide are easily recognizable even for a layman, the initiator of the guide assures.

This is not the first route related to geological curiosities in Polish cities prepared by the scientist from Poznań. Similar guides have already been created for Poznań, the Tri-City and Olsztyn.

"I completed the stops for the Warsaw route during trips to the capital city and while visiting the city with my five years old son" - the scientist says. The inspiration for their creation of the guides were the geologist`s conversations with children. "During workshops with children interested in dinosaurs, excavations and the work of a palaeontologist I realised that in Poland such places were the easiest way to find traces of life from the time of dinosaurs to stimulate their imagination" - he adds.

Wolniewicz intends to prepare more geological curiosities routes for other Polish cities. His plans include Toruń, Wrocław, Katowice, Chorzów and Sosnowiec. A guide to Warsaw is available at: https://zywaplaneta.pl/warszawa/