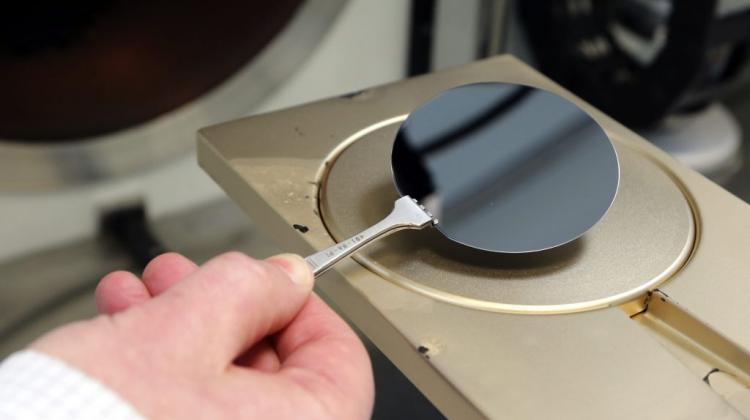 A plate, on which graphene is placed at the Institute of Electronic Materials Technology in Warsaw (ITME). ITME develops the technology of graphene production on dielectric and metallic substrates. Photo: PAP/Tomasz Gzell 29.01.2013

During the press conference at the Institute of Electronic Materials Technology in Warsaw, representatives of the institute spoke about the commercialisation potential of "Polish graphene". "We are a leading Polish organisation that specializes in graphene production techniques" said ITME director Dr. Zbigniew Matyjas.

Graphene is an atom-thick flat structure composed of carbon atoms arranged in a honeycomb-like lattice. Such a thin and invisible to the naked eye carbon "membrane" is extremely durable (on the atomic scale - more durable than steel), flexible, transparent, it conducts heat and electricity. In 2010, the Nobel Prize was awarded for the discovery of graphene.

Researchers at ITME are working on two types of graphene: graphene flakes and graphene film. Dr. Katarzyna Pietrzak, deputy director of ITME, explained that each of these types is produced differently and used in different solutions. Graphene film has the form of larger graphene sheets - single atom-thick film, which is deposited on materials such as copper by epitaxy. Such structures have the potential to be used in electronics. Graphene flakes are produced with chemical methods from graphite. This material can be added to ceramics, resins, metals or plastics to change their properties - for example to increase durability.

"Graphene flakes will definitely be commercialised, I have no doubt about it, and we will have a very large share in it" - said the ITME director.

Prof. Pietrzak noted that small amounts of graphene flakes would be sufficient to improve the properties of a particular material. Only a few decagrams of graphene flakes are needed to produce a ton of cutting tools. The researcher pointed out that the graphene filling a 50-liter barrel weighs only one kilogram. "We do not need to produce hundreds of tons of graphene. Significant production is measured in kilograms" - she said.

The institute already cooperates with a dozen companies in Poland on the production of specific products with graphene flakes. This cooperation concerns, for example, the use of this new material in the production of cutting tools with the addition of diamond, as well as rubber products that, thanks to graphene, become even 2-3 times more resistant to tearing. Innovators are also considering the use of graphene greases or new cooling systems using graphene liquids. A company from Germany is interested in using graphene from ITME in anti-corrosion paint.

Asked about specific names of companies with whom they cooperated, ITME representatives did not want to reveal details, citing confidentiality agreements.

According to Prof. Pietrzak, graphene foil poses a bigger problem, because there is no well-developed electronics industry in Poland. "Even if we can produce something great, nobody will take it from us" - she said.

Scientists from ITME have an idea for using graphene foil. Their flagship concept is a graphene hallotron - a magnetic field sensor. Dr. Grzegorz Gawlik, head of the ITME commercialisation department, explained that magnetic field sensors are used, for example, in internal combustion engines. Thanks to graphene, the Polish sensor is expected to be resistant to extreme temperatures: it could work in liquid nitrogen and in temperatures reaching 500 degrees C. "No semiconductor device can withstand this temperature range (...). This opens new fields of application" - said Dr. Gawlik . He expressed hope that the solution would be used, for example, in applications for cryogenics, superconductors, metallurgy furnaces or in hot engine parts. ITME employees mentioned that WPsensors from Zielona Góra was interested in testing their solutions.

Zbigniew Matyjas talked about the budget of his unit. "The financial situation of the institute is very stable. The institute had a short episode of economic problems in 2015-2016, but it is behind us" - he said. He presented the statistics, which showed that in 2015 ITME suffered losses of 6.4 million zlotys, and in 2016- 5.5 million zlotys. In the following years it recorded profits. Net profit in 2017 amounted to PLN 15.2 million, and in 2018 - PLN 0.4 million.

In 2011, the Institute of Electronic Materials Technology developed a technology for obtaining large graphene structures. In the same year, the company Nano Carbon was established, which was supposed to commercialise graphene - promote and prepare industrial scale production of graphene in various forms and in combination with copper and nickel. The company was expected to generate profit through the sale of graphene and its derivatives. The shareholders of the company were Polska Grupa Zbrojeniowa and KGHM Towarzystwo Funduszy Inwestycyjnych.

The Supreme Audit Office report published at the end of February identifies numerous irregularities in the NanoCarbon operations. In the opinion of the Supreme Audit Office, they are irremovable and lead to the company`s collapse. According to the report, the production of graphene was stopped by the premature, unreasonable recapitalisation of Nano Carbon and mismanagement. "Only a quick halt to the sale of fixed assets and decision about a possible continuation of the program by another entity can limit the growing losses" - write the auditors.

ITME representatives were asked about the link between ITME and NanoCarbon. "From the point of view of public procurement, we have no personal or capital connections" - said the institute director.

He added that there had been a personal connection - Dr. Włodzimierz Strupiński, with whom ITME parted in November 2017, was a board member of NanoCarbon. The director also mentioned that ITME and NanoCarbon used to carry out 4 research projects, but to his knowledge, they were all already completed. He added that NanoCarbon had furnaces weighing several tons in the ITME laboratories in connection with agreements concluded years ago. Disassembly of these devices would have to involve demolishing walls in ITME. Technological operation of these devices was suspended, he said.

Zbigniew Matyjas explained that the spectrum of NanoCarbon interests - especially concerning the purchase of devices - concerned graphene foil rather than graphene flakes.