A new method for precise synthesis of nanographenes 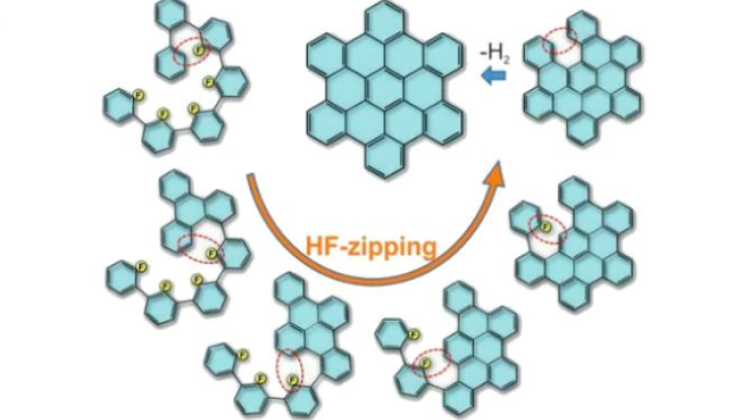 A new method for synthesising tiny structures of flat graphene has been demonstrated by a team from Poland and Germany in Science. For the first time, nanographenes were not synthesised on metal, but directly on a semiconductor substrate. These opens new perspectives for applications, for example in electronics and photonics.

Graphene is an atom-thick, flat structure composed of carbon atoms arranged in a honeycomb-like lattice. Such a thin, invisible to the naked eye carbon "sheet" is extremely durable, flexible, transparent, it conducts heat and current. When the Nobel Prize was awarded in 2010 for the discovery of graphene, thousands of scientists and businesses set off to search for applications for this material. Then the matter quieted down... Were there no ideas for using this material? Prof. Marek Szymonski from the Jagiellonian University says: "Graphene has excellent properties, but from the point of view of applications it is actually only a very thin conductive `sheet`".

Meanwhile, for example, for digital electronics, materials with band gap (including semiconductors) are more interesting. These are the materials through which the current will flow, but only if adequate energy is supplied to the charge carriers - for example, the applied voltage exceeds a certain value. At lower voltage, they act as insulators - they do not conduct electricity. Thanks to this, semiconductor devices can be used to perform logic operations: if the current has passed, we get the value of 1, if not - 0. The best known semiconductor is silicon, whose significance in the computer industry (the famous Silicon Valley) is difficult to overestimate.

But miniaturization of electronic devices is progressing and scientists are looking for materials that could be used to build semiconducting devices, but they would be only a few nanometers thick (a nanometer is a millionth of a millimeter). Traditional semiconductor devices do not work well in this scale. Researchers are looking for new materials with the desired properties. Their hope are nanometer-size graphene structures with the shape of islands or ribbons. It turns out that small graphene structures can be given properties that allow to use them to build basic electronic devices, for example logic gates or nanotransistors.

The problem is how to precisely synthesise such nanographenes invisible to the naked eye. It is not like you can use nanoncissors to cut invisible flakes from graphene sheets with atomic precision. Researchers are considering the opposite approach: how to arrange graphene structures from smaller organic compounds, such as individual aromatic molecules.

This is where the research by Prof. Konstantin Amsharov from FAU in Germany and the Polish team comes into play. The results of this research appeared in January in the prestigious journal Science. Researchers demonstrated how to perform a chemical reaction to synthesise nanographenes from easy-to-control intermediates (so-called precursors). The presented method works sequentially - scientists call it "nanozipping" and compare this reaction to a zipper.

In addition, in an experiment performed in Kraków, nanographenes were synthesised directly on a semiconductor surface, which is a significant new achievement. "Our paper is the first report of a fully controlled synthesis of nanographene on non-metallic surfaces" - says Dr. Marek Kolmer, the first author of the study, who is currently a postdoctoral researcher at Oak Ridge, USA.

Prof. Marek Szymonski, who is also among the authors of the publication, explains that the basic building blocks for synthesising nanographenes in their experiment are aromatic carbon structures made up of benzene rings connected by one bond and terminating at the edges with hydrogen or fluorine atoms. If one of the fluorines connects to the nearest hydrogen atom from an adjacent ring (and this can be controlled, for example, by raising the temperature) the sequence of reactions between successive benzene rings begins. "And so, `tooth by tooth`, pair by pair, as in a zip fastener, benzene rings will connect to form a nanographene structure" - says Prof. Szymonski.

Dr Marek Kolmer explains that a nanographene molecule of 42 carbon atoms is synthesised from the precursor as a result of six sequentially activated reactions. "It`s a puzzle piece that can be used to produce larger, atomically defined structures" - he says.

Until now, graphene structures from molecular precursors have been made on substrates of metals such as gold, silver and copper. But these metals are great conductors. In order to check how graphene nanoparticles work as electronic materials, nanographenes must be torn off and transferred onto another substrate, for example a semiconductor. And then there is a risk that such an atomically defined system will be modified.

Meanwhile, the German-Polish team managed to synthesise nanographenes directly on titanium dioxide (rutile), which is a semiconductor. Dr. Kolmer explains that rutile is crucial for the chemical reaction that does not occur on copper or gold substrates. But researchers expect that it will be possible to synthesise nanographene with this method on other semiconductors and insulators.