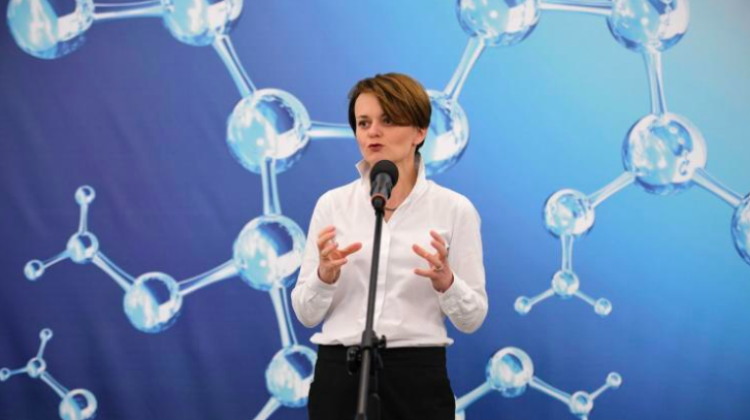 Minister of Entrepreneurship and Technology Jadwiga Emilewicz at the conference on a special loan to the Institute of High Pressure Physics of the Polish Academy of Sciences, Jan. 9 in Warsaw. Funds in the amount of nearly PLN 15 million will be used to buy gallium nitride manufacturer Ammono. Photo: PAP/Jacek Turczyk 10.01.2019

The Industrial Development Agency granted a PLN 14.72 million loan to the Institute of High Pressure Physics of the Polish Academy of Sciences. This money will allow to develop technology based on gallium nitride, which is the basis for further development of Industry 4.0 - electromobility and e-mobility.

"The Industrial Development Agency decided to financially support the Institute of High Pressure Physics PAS, so that it could buy Ammono, a company that has been struggling with very serious financial problems for over three years, while being the holder of (...) the highest world level intellectual property" - Minister of Entrepreneurship and Technology Jadwiga Emilewicz said at the press conference, at which the transaction was announced.

She noted that this concerned a 21st century technology, on which "public funds were spent" in the form of laboratory equipment and grants awarded to Ammono.

"We are interested in further development of this technology in Poland" - Emilewicz emphasized. According to her, thanks to the IDA loan, "there are chances to do that".

"I hope to invite potential recipients to the table, that includes companies from both defence and chemical sectors" - she said. She reminded that it was Polish scientists who developed gallium nitride3, described in professional literature as a breakthrough innovation in the field of optoelectronics and electronics, comparable - as she noted - "to implementing silicon based products".

"The Institute of High Pressure Physics PAS received funds in the amount of nearly PLN 15 million, which will allow for further development of technology based on gallium nitride" - Paweł Kolczyński, vice-president of IDA said at the conference. He added that there were only three technologies for the crystallization of this chemical in the world, and incorporating Ammono into the Institute would allow to develop two of them in Poland. "It is very important for building lasting competitive advantages of our economy" - he stressed.

According to IDA, after the transaction is finalised, Ammono`s assets will become part of the institute`s assets. "It will be internally separated as a pilot line, where the production of gallium nitride substrates will be carried out" - the agency explained. The research part will be combined with the "resource of the institute`s research laboratory", where further work will be carried out to improve the substrate production technology.

"Gallium nitride we manufacture is of highest structural quality, and that is the basis for further development of Industry 4.0, electromobility and e-mobility. We always have to look ahead in innovations, be a step ahead" - said the director of the Institute of High Pressure Physics PAS Prof. Izabella Grzegory. The institute estimates that in about two years, it will perfect the production technology of 2 inch substrates that will be used in industry. Then it will be possible to commercialise them. Until then, the institute`s pilot line will manufacture 1 and 1.8 inch substrates that will be sold to other research units for research and development projects.

Ammono was founded in 1999 by Polish scientists who developed the largest and best quality gallium nitride crystal. Plates cut from these crystals are used, for example, in Blu-ray technology and high power LEDs used, for example, in car lamps. They are also used in power converters in hybrid and electric cars (PAP)