New evidence of human presence in Poland in Late Antiquity 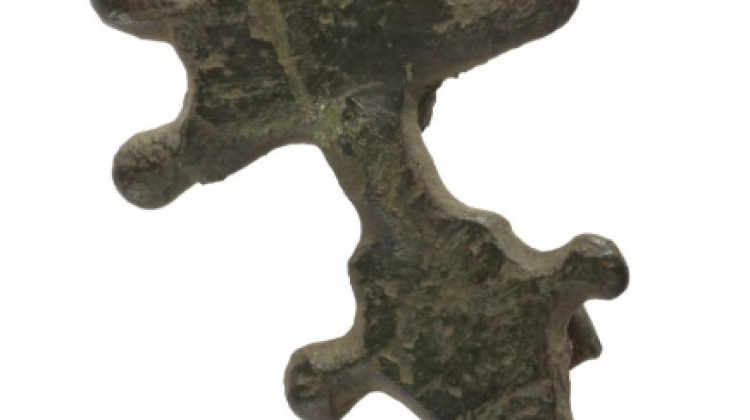 Dozens of bronze, silver and gold objects from the end of Antiquity and the early Middle Ages have been discovered near Rogoźno (Wielkopolska). This is yet another proof that, contrary to popular belief, the area of Poland was not deserted at that time.

Archaeologists have summarized the research carried out for several years near Rogoźno. Various research methods have been used, but according to the researchers, the use of metal detectors in the fields was decisive. Researchers found the most interesting objects at the border of the town of Rogoźno, near the Wełna River.

"We have discovered many, in a large part unique, objects. In connection with the old settlements where they had been used by people and then lost, this is a breakthrough discovery at least for Wielkopolska" - believes the project leader, archaeologist Mirosław Andrałojć. According to Andrałojć, until now archaeologists have not encountered such an accumulation of artefacts anywhere in Poland in the former human settlements of this period (from the second half of the 3d to the first half of the 7th century). Some objects can be seen at the temporary exhibition "Wandering peoples over the Little Warta" (the Wełna River was once referred to as the Little Warta) at the Regional Museum in Rogoźno, which is open until the end of November.

Among the most interesting monuments, the discoverer mentions the oldest bronze bell known to date from Poland. According to the researchers, the most similar bell from this period comes from... Corsica. It was therefore brought from the area of the Roman Empire. According to Andrałojć, the object was cast and then machined on a high-speed lathe - this technology was not known in the areas on the Vistula. During the project, researchers also discovered a large number of metal buckles that were used to fasten robes. Many types were not known from Polish lands before - most of them were imported from Scandinavia. They were made in the 4th and the 5th century. In some cases, the origin can be more specifically determined - for example, some buckles come from Denmark.

There are also many belt buckles and decorations, as well as pendants. A sword hilt fragment also caught the attention of researchers.

"Under the surface of the earth, we came across the remains of old buildings, including relics of huts and hearths dug in the ground" - the researcher says. The area where the monuments were found stretches over several hundred meters; it is also divided by the river and wetlands. Archaeologists believe that there could be separate settlements that functioned during the same period.

It also turned out that not all metal objects had been imported. "We found traces of a foundry in the form of fragments of solidified metal that the metal workers dropped during processing" - he says.

Andrałojć emphasizes that the age of discovered monuments stretches from the second half of the 3rd until the 7th century. This means that people inhabited these areas continuously or were systematically returning to this place over the period of about 400 years. This is surprising, because according to the widely accepted concept regarding the settlement of Poland at the end of the Antiquity, that is from the middle of the 5th century, this area was believed to be almost completely deserted (Germans were to leave the area on the Vistula). Only after some time - at the end of the 6th and in the 7th century - the Slavs were to fill this void.

According to Andrałojć, it is difficult to precisely determine the origin of people living during that period in the Polish lands, including the discovered settlements.

"This is still more a matter of hypotheses and beliefs than scientific evidence. Thanks to the objects discovered in the vicinity of Rogoźno, we only know that they maintained intense contacts with the peoples inhabiting the Baltic coast, especially with southern Scandinavia" - says Andrałojć.

The scientist believes that a large change occurred in the 6th and the beginning of the 7th century. Archaeologists also discovered numerous monuments from that period that were imported, but from other directions. Among them are Slavic and Baltic objects.

In recent years, Prof. Aleksander Bursche from the Institute of Archeology, University of Warsaw carried out a broad undertaking concerning the study of the same period in the history of Poland. The artefacts discovered during that projects can be seen at the exhibition "Barbarian tsunami", presented in various cities in Poland.