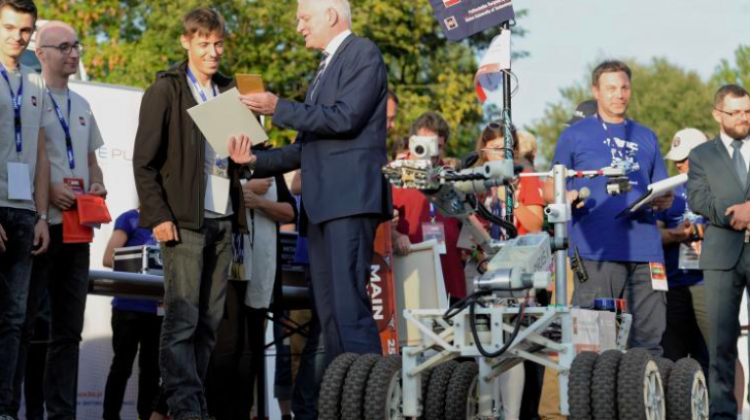 Starachowice, 16.09.2018. Deputy Prime Minister, Minister of Science and Higher Education Jarosław Gowin (C) and the winning Impuls Team from Kielce University of Technology during the closing ceremony of the European Rover Challenge 2018 - international robotics competition, September 16 at the Museum of Nature and Technology "Ecomuseum" in Starachowice. PAP/Piotr Polak

The team "Impuls" from Kielce University of Technology won the 4th edition of the international competition European Rover Challenge that ended last week in Starachowice (Świętokrzyskie). The award was presented by the Minister of Science and Higher Education, Deputy Prime Minister Jarosław Gowin.

The European Rover Challenge (ERC) is a prestigious competition of Mars robots built by student teams. From Friday to Sunday, 35 teams from 20 countries competed at the Jan Pazdur Museum of Nature and Technology "Ecomuseum" in Starachowice. Poland was represented by a dozen teams.

During the closing ceremony, the Minister of Science emphasised that this event had a "special meaning" for Poland. "Firstly - for the last three years we have been implementing a daring plan for the reconstruction of the Polish economy. We want to build a bridge between the world of science and business and give Polish companies a more innovative character. But for cooperation between business and science to be creative, we must also reform science. This deep reform will start from the 1st of October" - said Gowin.

According to the minister, Poland "has been the path of intensive development for several years, including the space industry". "We already have dozens of dynamically growing private companies, some of them are start-ups, and some are starting to make their mark their in the global markets. I hope that today`s meeting is an opportunity for young scientists, innovators, entrepreneurs from many countries, to share experiences and compete in a noble rivalry" - added Gowin.

"The nations of the world often stood against each other wherever it came to conquering the earth, I hope that the conquest of space - a great challenge for humanity - will run in a completely peaceful manner" - emphasised the deputy prime minister, congratulating the teams competing in Starachowice.

The winner of the fourth edition of the ERC was the team "Impuls" from Kielce University of Technology. In June, the same team finished third in the prestigious University Rover Challenge (URC) in the US.

"This is a huge reward for hundreds of hours of our hard work. With each successive edition of the ERC, the level of competition is higher, there are more teams. There are teams from the best universities in Europe, Asia, USA and Canada. The level of competition is very high and we have to prepare more and more" - Dawid Pietral from the Kielce university said in an interview.

He added that in order to get extra points in the competition, the team had to put emphasis on the autonomous execution of various tasks by the robot. He noted that a few very good quality devices were used in their rover, which distinguished the Kielce team from the other teams. "We have an excellent arm that is very precise, moves very fast (...) We had a specially prepared system for sampling - it hammered the drill into the ground in a percussive manner. We also have an excellent image recognition system" - described Pietral.

The winning team`s design will become the official rover of the prestigious AMADEE-2020 analogue mission (simulation of a manned mission to Mars), which will be organized by the Austrian Space Forum in the desert in Oman in 2020.

The winners of the second place are the "Raptors" team from Lodz University of Technology. The third place went to the team "Robotics for Space Exploration" from the Canadian University of Toronto. The team from Canada achieved a very good result despite the fact that their rover reached Starachowice on the second day of the competition.

The teams competed in a specially prepared field that resembled the surface of Mars. The task of the participants was to design and build a Mars rover, which would compete in four field competitions, including taking a soil sample and finding a hidden object, extracting it and transporting it to another point. Team members did not see their rovers during the competition - they controlled them remotely.

The teams participating in the competition prepared robots modelled on the Curiosity rover stationed on Mars, or the ExoMars robot that will reach Mars in two years. The final competitions and their guidelines have been prepared on the basis of "road maps" of robotic programs planned by NASA and the European Space Agency (ESA).

The event was accompanied by space science and technology demonstrations and meetings with the stars of world astronautics.

PAP - Science in Poland was one of the media sponsors of the event. (PAP)