Research: Peat bogs are our allies in the fight against warming. For now 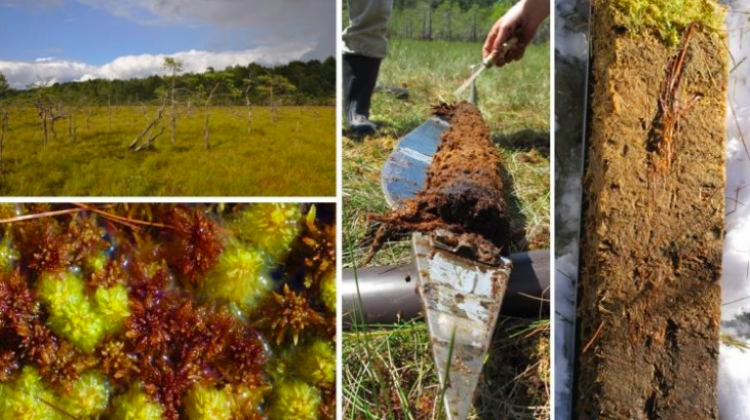 From left to right: photo of a bog, mosses and peat moss, and geological samples taken from the bog. It shows how peat bogs accumulate organic matter. Source: Prof. Mariusz Lamentowicz

By storing carbon from carbon dioxide, peat bogs help in the fight against global warming. But it will not last forever. In over one hundred years - when it gets too hot - peat bogs on Earth will release more carbon than they absorb, new research shows.

Peat bogs, wetlands are our allies in the fight against global warming. "On Earth, they are even more important carbon reservoirs than forests" - says Prof. Mariusz Lamentowicz from Adam Mickiewicz University in Poznań. But the latest research shows that in about 100 years the potential of peat bogs will significantly decrease.

The researcher is one of the co-authors of the publication, which appeared in the journal Nature Climate Change. Researchers from an international team analysed geological samples from nearly 300 peat bogs around the world and estimated their carbon content. They wanted to know under what climatic conditions bogs would be the most efficient carbon storage facilities - and how they would "work" for the climate as the temperatures on Earth increase.

The naturalist explains that during photosynthesis, plants of peatlands absorb carbon dioxide from the air and store carbon in their cells. When the plant dies, its tissues are stored in humid conditions. If the water level is high enough, these remains - without oxygen - are very slowly decomposed by microorganisms. And that means that carbon does not return quickly to the atmosphere in the form of carbon dioxide.

Carbon can be trapped in peat for a really long time. "The depth of peat in a peat bog can reach as much as 12-15 meters" - the naturalist says. He adds that lignite and coal deposits originated from peat bogs from millions of years ago.

The international team`s research shows that on a global scale, over the next 100 years bogs will absorb more carbon dioxide than before. In connection with the melting of ice in the areas of permafrost, bogs will form in areas where previously they have not occurred. In addition, global warming will extend the growing season of plants in the far north. Plants will have time to grow and absorb more carbon.

But the warmer it gets, the more carbon the bogs will release into the air. "They will start to breathe more intensively" - says Prof. Lamentowicz. He explains that in a warmer climate, microorganisms in peat bogs - fungi and bacteria - quickly break down plant debris. Carbon dioxide gets back into the atmosphere and contributes to a further increase in temperatures. "This is why peat bogs in tropical areas have less potential for absorbing carbon than, say, peat bogs in Siberia or northern Europe" - explains the scientist.

Peat bogs are worth protecting not only because of the climate. "Above all, they are extremely beautiful areas!" - the researcher says. He explains that many rare and threatened species live there, including rare species of birds - aquatic warbler or great snipe. In addition, peat bogs are often areas with little human damage, "which can not be said about most forests in Poland". The original wilderness can be discovered by travelling through peat bogs" - says the naturalist.

Professor Lamentowicz encourages travelling through peat bogs with a guide: "Swamp can draw you in! Among people who will visit peat bogs with us a few times, the love of these wild areas often stays for the rest of their lives!".