Egyptologist: The life of slaves in Egypt was not as hard as we think 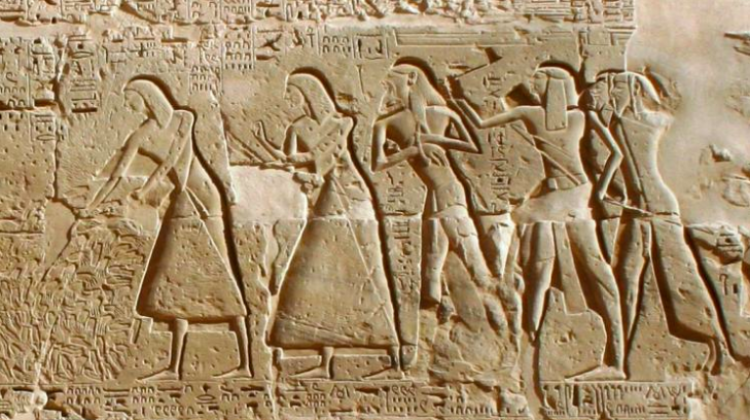 A Libyan captive, shackled, led by an Egyptian soldier. A scene from the Medinet Habu temple, photo by A. Ćwiek

They could marry Egyptian women and had similar jobs as other inhabitants of the Nile Valley. Contrary to popular belief, they did not build the pyramids, and their life was not harder than that of Egyptians doing hard jobs. Dr. Andrzej Ćwiek talks about slaves in Egypt.

It was a long-held view in science that the Egyptian pyramids were built by thousands of oppressed slaves. Later, the researchers believed that peasants were forced to build them - the construction of tombs was supposed to take place only outside the season of agricultural work.

"None of these concepts survived the test of time. Pyramids and other monumental royal structures were built by highly qualified workers who devoted their entire lives to this activity" - says Egyptologist from Adam Mickiewicz University and the Archaeological Museum in Poznań, Dr. Andrzej Ćwiek. He adds that this does not mean that there were no forced labourers in Egypt.

"Slaves in our contemporary understanding of the word were basically only prisoners of war, foreigners" - says Dr. Ćwiek. Their largest number appeared on the Nile in the imperial period, the New State (1550-1069 BC), when the Egyptian borders expanded greatly as a result of successful conquests. The largest number of Asians, inhabitants of Syro-Palestine, and many Nubians from the area of "black Africa" came to the land of the pharaohs this way.

"But the economy for Egypt had never been based on slavery, as was the case in Rome, for example. Forced labourers were not a homogeneous and cohesive social group" - says the Egyptologist. Without their work, the foundations of the state would not crumble.

What was their fate? Contrary to popular belief, according to Dr. Ćwiek their life did not have to be harder than that of Egyptians performing hard work, for example in quarries.

Dr Ćwiek emphasizes that slaves usually assimilated quickly in the local population and did not constitute a separate social group. Their legal situation was not clear; they were not a separate and closed social group. They were treated as people and had the right to private property. "There were even cases of slaves marrying Egyptian women!" - the Egyptologist notes. This means that they were not stigmatised or commonly despised.

Even the Egyptians who acquired building material in the quarries were a highly qualified workforce, as were the craftsmen who processed stone blocks. Slaves, usually prisoners of war, were sent to such teams and probably were treated just like the other workers, the Egyptologist believes.

We also know that slaves worked in Deir el-Medina, a village of workers who were building the tombs in the Valley of the Kings near Luxor in Upper Egypt. They prepared food and washed clothes of craftsmen. In general, they often worked as servants in private homes.

In exceptional cases, foreigners would make staggering careers. This was the case of Mai-per-heri, who lived during the reign of Hatshepsut (15th century BC). Although he was of Nubian origin, possibly a prisoner of war or a hostage brought up in the court of the Pharaoh, he was buried in the Valley of the Kings. "His Egyptian name, which means +Lion on the battlefield+ may suggest that the reason for this distinction could have been wartime merits, maybe even saving the life of the Pharaoh" - says Dr. Ćwiek.

There are many indications that slaves - although there was no single term to name them in Egypt - quickly adjusted to over local culture, learned the language, and took Egyptian wives.

"It is quite puzzling as many documents from the era described the Asians or Nubians negatively, with the worst epithets. But once they were enslaved, they were treated quite well compared to other ancient cultures" - says Dr. Ćwiek.

In a way, even the Egyptian workers and craftsmen were not free. They were not allowed to move freely around the country or change their professions. "But they did not consider themselves prisoners - this was how the state of the world`s first civilization was structured. There was no question of individual freedom of the people. On the contrary - each of the inhabitants of Egypt had a strictly designated social role and usually performed it" - says the Egyptologist.

Peasants, who were the majority in the Egyptian society, usually farmed fields that belonged to either the Pharaoh or high dignitaries. They were forced to pay tributes to them. "But it would be a stretch to say that they were oppressed. It was a system that provided +social insurance+ - in times of drought, the owner of the fields would open granaries to peasants. This way the superiors provided their subjects with a sense of security" - says Dr. Ćwiek.