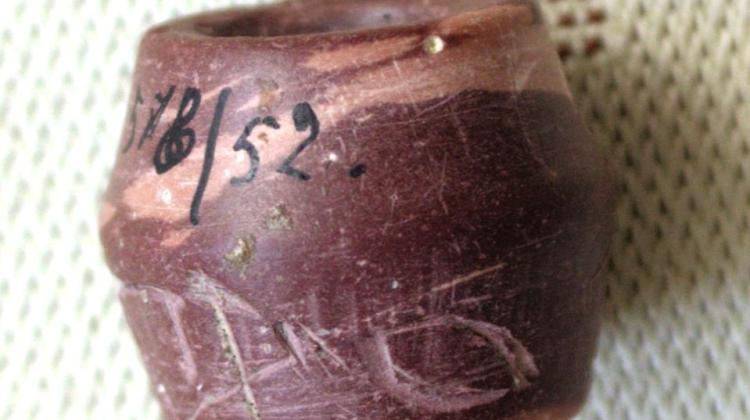 The only early medieval whorl (a small, biconical object, a moving part of a spindle) with an inscription found in Poland has been discovered by archaeologists in Czermno (Lublin province).

The only early medieval whorl (a small, biconical object, a moving part of a spindle) with an inscription found in Poland has been discovered by archaeologists in Czermno (Lublin province).

Spindle whorl adds weight to a spindle, prevents the threads from sliding off and maintains or increases the spin. Whorls come in different shapes - they can be spherical and biconical. They have a hole in the middle. They are usually made of clay, less often of stone.

The object in question was found during excavations over 60 years ago. However, Iwona Florkiewicz from the Institute of Archeology of the University of Rzeszów only now noticed the inscription during the analysis of the artefacts discovered at that time.

"Interestingly, archaeologists who conducted research in Czermno in 1952 did not notice that the seemingly chaotic lines formed an inscription. This is an unprecedented situation - it is the only spindle whorl from this period covered with writing known in Poland" - says Florekiewicz. The archaeologist notes that there could be other objects of this type in the collections of Polish museums that have not yet been identified. "Archaeologists probably did not expect spindle whorls to have inscriptions, so these objects were not analysed in this respect" - she concludes.

The object from Czermno was made of the so-called Owrucz slate, which is not a local raw material - its outcrops are located in present-day Ukraine, near Owrucz (hence the name).

"It is hard to say whether the whorl was been made in Czermno or imported from the east, but it is certainly of Russian origin. Similar whorls covered with letters are known from the same period from the former Kievan Rus' territory, that is present Ukraine, Russia and Belarus" - the archaeologist says.

Palaeographic research (on the form of writing) carried out by Dr. Adrian Jusupović, historian from the Institute of History PAS in Warsaw, shows that the inscription was made in the second half of the 12th century or in the 13th century.

The spindle whorl bears an inscription composed of 6 letters in Cyrillic, which can be transcribed as Hoten\'. It is a masculine name that means a lover, volunteer or master. It is also possible that the inscription was a toponym. In that case it should be associated with the name of a town or village. But researchers find this second possibility is less likely.

According to archaeologists, today's Czermno in the Lublin region was the historical Cherven - the administrative centre of the Cherven Cities, over which the Piasts had been fighting with the rulers of Kievan Rus' since the 10th century. Bolesław the Brave managed to recapture them in 1018, but after his death Yaroslav the Wise retook the territory in 1031. It was not until the 14th century that Casimir III the Great reincorporated the former Cherven Cities into Poland.

"Thus, the spindle whorl probably comes from the time when this area was a part of Kievan Rus'. Remember that Czermno was a borderland town, where cultural influences from the east and the west mixed" - adds Florkiewicz.

"We are not sure whether the spindle whorl was used for its original purpose - spinning - or had a secondary function as an amulet. The latter possibility should not be ruled out" - Florkiewicz believes. She adds that according to the researchers, similar inscriptions could be signs of ownership. There are known spindle whorls that bear the names of women and men. "It is also possible that in this case it is the name of the object's maker" - she concludes.

The spindle whorl was discovered inside the settlement but outside the buildings, which may suggest that it was lost. The object is currently in the collection of the Zamość Museum.

Scientists stumbled upon the spindle whorl while doing an inventory of archival finds from Czermno (discovered over several decades) as part of the scientific project "Golden Apple of Polish Archeology...", funded by the National Program for the Development of Humanities and supervised by Prof. Marcin Wołoszyn.