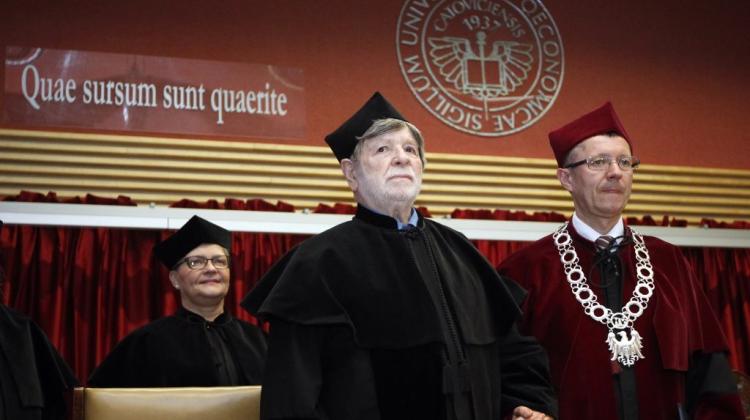 It\'s quite symbolic that in Katowice, where Zionism was born, Zionist receives an honorary doctorate - said former Israeli ambassador to Poland Prof. Shevach Weiss before receiving the honorary title bestowed the University of Economics in Katowice.

Weiss referred to the important event for the Zionist movement, which took place in 1884 in Katowice - so called Katowice Conference, today commemorated by street names of Israeli cities. At the Conference, members of Hovevei Zion movement established the organisation structures and decided to aid existing Jewish settlements in Palestine and establish new ones. After the Katowice meeting, the movement flourished.

"This is where pre-Zionist movement was born, which was the foundation of the Zionist movement. As a Zionist, who left Poland for Israel as a child, I was lucky enough to be elected to the Knesset, be Deputy Speaker of eight years, Speaker and Vice President of the the State of Israel for five years, president of the Yad Vashem Council for seven years - and always remain a scientist. It is quite symbolic that in Katowice, where Zionism was born, this Zionist is awarded honorary doctorate" - said Weiss in Katowice.

Asked whether he was surprised by being awarded the title by a business school, the politician reminded that he had already received several honorary doctorates - including one from the Medical University of Lodz.

"The rector of the university Prof. Paweł Górski said then that I deserved it, because I healed Polish-Jewish relations. If so - since we have fantastic Polish-Israeli relations exactly just in economic matters and I arranged some of these economic matters between our countries while being ambassador to Poland for several years as, it could be in this context, as a person who has done something for the economy of the two countries ... But it seems to me that this award is another matter" - said Weiss.

"I spent my last 10-15 years of the mission to be not only an ambassador - unofficial envoy - of the Jewish people, not only of the State of Israel, to the matter of positive response to the historical question is it possible for Jews and Poles to start anew..." - said the politician. "I want to convince myself and you, and youth, my students (...) that it is not only possible - it is spiritually and historically necessary" - he stressed.

The highest academic honour was granted Israeli politician by a resolution of the Senate of the University of Economics in Katowice of April 25, 2013. The promoter of the scientific achievements of Shevach Weiss was Prof. Urszula Zagóra-Jonszta of the Department of History of Economic Thought, and reviewers were professors: Barbara Kożuch from the Jagiellonian University, and Jan Kantyka of the University of Silesia.

Kantyka noted for example, that one of the cards in Weiss’ life was a sports career, interrupted by a car accident. "Prof. Weiss (...) was an all-round athlete, who distinguished himself in a number of areas - from journalism to diplomatic, political, and creative activity" - he emphasised. He also spoke about the professor’s merits and contributions to combating the Holocaust Denial, and the defence of the truth - also by pointing to its infamous accents.

Shevach Weiss is an Israeli politician, political science professor. He was born in 1935 in Borysław, Poland (now in Ukraine). After World War II, he migrated with his family to Israel. Since 1981 he was a member of the Knesset, in 2000-2003 he served as an Israeli ambassador in Poland. He was president of the Yad Vashem Council. He authored many books on political, sociological topics, matters relating to the World War II, and books for children and young people. Since 2003 he teaches at the University of Warsaw.