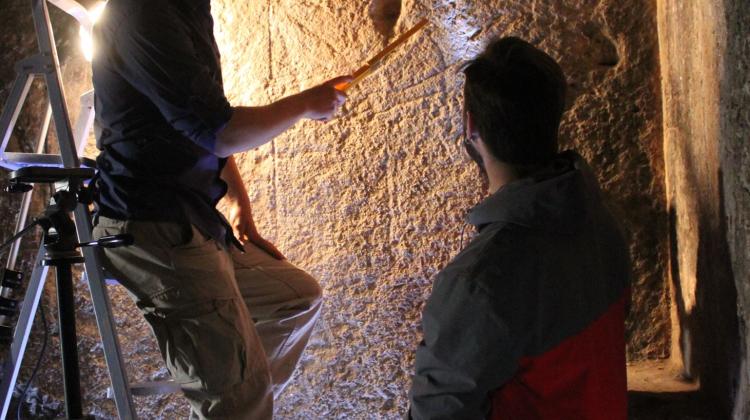 Cut in the rock and consisting of two rooms, the walls of which are covered with poorly preserved decoration and hieroglyphic inscriptions: a team of archaeologists working under the auspices of the Polish Centre of Mediterranean Archaeology of the University of Warsaw started research in the ancient temple at Gebelein in Upper Egypt.

This place was already known to the local authorities, but so far no archaeologist has studied it. Previous researchers could have been discouraged by the poor condition of the decorations. This year\'s results of Polish research were surprising.

"This temple was dedicated to two gods. There is no doubt that one of them was Hathor, with the cult epithet Lady of Gebelein. The other deity could be Amun-Ra. Unfortunately, his depictions are not preserved and further studies are needed to verify this idea" - explained Daniel Takács, a member of the expedition.

Images of many deities were destroyed in antiquity. Pharaoh Akhenaten, who ruled in the fourteenth century BC, promoted the worship of one god, whose symbol was the solar disk. Depictions of other gods who did not have solar aspects were destroyed during his rule. The Goddess Hathor was associated with the sun, so her depictions ware spared.

"The most puzzling was the lack of royal names in the temple. Rulers of ancient Egypt loved to put their names on the walls of temples exposed to the public view . Sometimes they would destroy the names of previous kings to put their own in these places" - added Wojciech Ejsmond, director of the expedition.

Detailed studies of reliefs and inscriptions, made by Daniel Takács, yielded sensational results, dating the construction of the temple and the first phase of decoration to the reign of the queen, whose name the ancients wanted to erase from history. It was Hatshepsut (fifteenth century BC). The presence of her depictions is indicated, among others, by fragments of preserved hieroglyphic inscription containing the feminine word endings. The context in which the cartouche (oval box, in which the ancient Egyptians placed the names of the Pharaohs) is located indicates that it contained the name of this queen.

After the death of her husband - Tuthmosis II - Hatshepsut exercised power of a regent on behalf of her minor stepson and nephew - Tuthmosis III. Ejsmond explained that at some point Hatshepsut began to apply full royal titulary, reserved only for pharaohs, despite the fact that Egypt had a rightful ruler - Tuthmosis III. For decades, researchers thought that the queen wanted to take over full power, and her ambitious building program and depictions of the queen as a legitimate ruler on the walls of temples were intended to legitimize her reign at the expense of her stepson.

"At present it is believed that the situation was more complicated. The Queen Hatshepsut ruled together with young Tuthmosis III in order to ensure the stability of Egypt, and many of her actions led to strengthening the position of the young king" - explained Ejsmond. "Perhaps, many years after her death, due to a complicated dynastic situation, Tuthmosis III was afraid that another ambitious queen might take over and push his own son away from power? This could lead to his decision to remove references to Hatshepsut as a pharaoh, according to the principle - if it is not engraved in hieroglyphics, it never happened. But this is one of many theories. Why he wanted to erase her name is still a mystery" - he added.

Ejsmond noted that Hatshepsut was neither the first nor the last woman pharaoh in Egyptian history. However, the ancients did not try to erase others female pharaohs from history. That is why scientists are so puzzled by consistent attempts to remove the name of Hatshepsut. Further work in the rock temple at Gebelein may also provide more information on her reign. Archaeologists plan to remove the debris from the floor. Perhaps they can find artefacts from the period of the functioning of the temple.

Various photographic techniques allow not only to take pictures of antiquities, but after processing in specialized software also to enhance the features that are no longer visible or very hard to see for the naked eye. This allowed some fragments of wall decoration to be seen , and to confirm the existence of painted inscriptions several meters above the temple. Thanks to the photogrammetric technique, scientists take measurements and create the plan of the temple faster and more accurately than using traditional methods.

The discovery of the temple was made in a larger project of a multi-disciplinary study of the important centre on the map of ancient Egypt, which Gebelein was. Currently it is a complex of archaeological sites located approx. 30 km south-west of Luxor. More than 5 thousand years ago there was probably a capital of one of the proto-states, which laid the groundwork for the civilization of the Pharaohs.