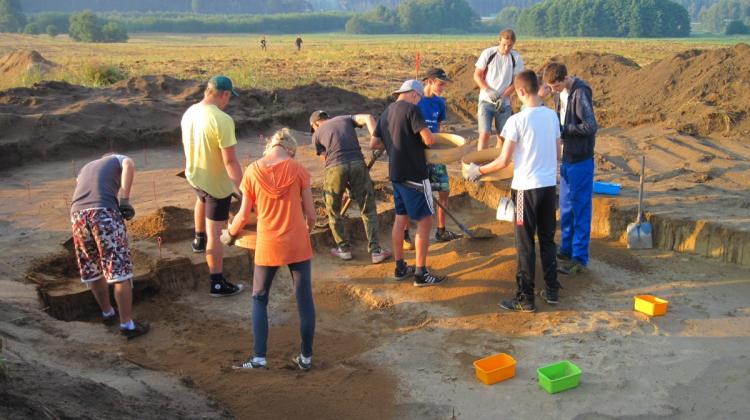 Excavations. Photo by I. Sobkowiak-Tabaka

Places where at the end of the last ice age people established encampments and made flint tools, skinned animals and processed antlers, have been studied by researchers in Lubrza near Świebodzin. This is one of the richest discoveries of this kind in Poland.

During the three-year research project, between 2011 and 2014, archaeologists discovered about 4 thousand flint objects. Such a large number of items indicates that dozens of thousands of years ago, hunter-gatherers intensively settled in the Świebodzin area. In the case of the newly discovered sites it is known that the encampments were established near bodies of water. Due to the high research potential of the area, scientists decided to study it thoroughly using a variety of methods.

"Not a trace remain of the structures used in the camps, but we were able to find traces of activity of the inhabitants of the Lubusz Land. In addition to flint tools, these include burned animal bones, tools for striking fire and pestles made of sandstone" - explained Dr. Iwona Sobkowiak-Tabaka from the Institute of Archaeology and Ethnology PAS, who headed the interdisciplinary project funded by the National Science Centre, in which representatives of the humanities and natural sciences participated.

Thanks to the animal bones discovered in the encampment remains, which happens very rarely, it was possible to accurately determine the encampment age using the radiocarbon method. Until now, this type of material has been obtained and dated in Poland only a few times. Equally interesting discovery was made by Dr. L. Kubiak-Martens, who identified burned remains of plants and charcoals (pine, willow), from fires burned in the encampments.

Detailed analysis of tools allowed to determine their purpose. Researchers discovered arrowheads and objects used to skin animals, treat the skins, but also tools bearing traces of processing plants. Traces of this type were previously associated by archaeologists with the Mesolithic and Neolithic communities, younger by a few thousand years. According to Dr. Bernadeta Kufel-Diakowska, who has done research into the function of these tools, this fact testifies to the high demand for plant material in the late Palaeolithic and considerable skills associated with processing and use of herbaceous plants available at the time.

Due to the extremely attractive location, on the southern coast of the studied basin, scientists discovered the remains of settlements from the Paleolithic, Mesolithic, Neolithic, Bronze Age and early Middle Ages, i.e. from approx. 13 thousand years ago to approx. 1000 AD.

The landscape surrounding the studied encampments 13 thousand years ago was different from today. The lake was surrounded by pine and birch forests. By the lake appeared bulrush (Typha latifolia) and white waterlily (Nymphaea alba). However, about 11,000 years ago, climatic conditions had declined dramatically. Vegetation appeared in the form of dwarf birch, juniper and herbaceous plants - mugwort and selaginella. The coasts of the lakes were overgrown with sedges and grasses - detailed palaeobiological analysis showed.