Whales seen again in the waters of the Baltic Sea 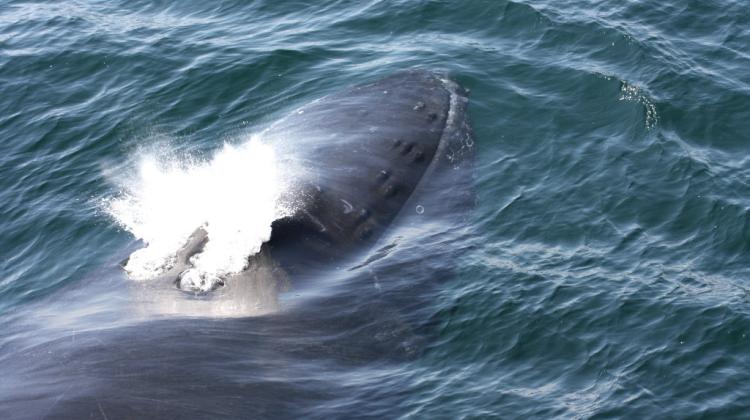 Two whales were seen in the German and Danish Baltic coast. In the beginning of June, a whale probably entered the Polish marine waters in the vicinity of Darłowo. This, however, is not certain, because everything happened so fast that no one took pictures.

"On July 11 in the area of the German coast of the Fjord Flesenburg, two humpback whales were spotted. A day later, they were by the Danish shores of the basin" - reported the Marine Station of the Institute of Oceanography of the University of Gdańsk. About seven humpback whale spikes were recorded near the coast of Denmark.

A few weeks ago a humpback was probably noticed also by the Polish coast, near Darłówko. Whale body emerging from the water was spotted around 7 AM on Thursday, June 27 by one of the fishers fishing for herring on harbour heads. "It was coming from west to east, only about 300 meters from the harbour heads. Before the animal submerged in the sea, the fisherman even noticed a cloud of steam. Another emergence took place at a distance of approximately 1.5 km to the east, and the mammal disappeared" - described the Marine Station IO UG.

The size of the visible part of the animal was estimated to be 5-6 meters long. However, since there is no photographic documentation of the event, it is not certain that it really was a whale. "Nobody had thought to take a picture. Everything happened too fast" - reported the Marine Station IO UG.

Previously a humpback whale appeared in the Darłowo area in 2008. It was also seen in Rowy, Orzechowo, Kuźnica on the Hel Peninsula. Previous humpback whale visit by Polish shores took place at the end of March 2006, and earlier on 7 February 1979. Earlier still, people on the Polish coast saw single specimens of sperm whales, fin whales, sei whales.

Humpback whale (Megaptera novaeangliae) is distinguished by long, wing-like pectoral fins and head covered with bumps. The animal can often be seen jumps out of the water, sometimes completely exposed. It is found in almost all the seas and oceans of the world except the extreme arctic regions.