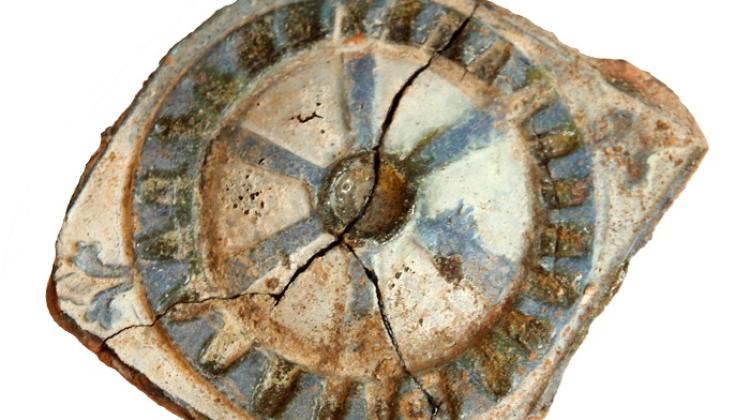 Beautiful Renaissance cocklestove tiles with the quality and style matching those from the Wawel Royal Castle in Kraków have been discovered during research in the ruins of the stronghold in Żelechów (Masovian Voivodeship).

During this season, they focused on exploring the remains of the 16th-century court and the earlier, late medieval buildings located in the same place. The structures were part of a wooden castle.

The head of research Wojciech Bis from the Institute of Archeology and Ethnology of the Polish Academy of Sciences told PAP - Science in Poland that excavations made it possible to determine that the wooden building used in the 16th century was destroyed by fire. The archaeologists unearthed burnt beams and layers of burnt clay, which could have covered the walls and floor of the structure.

However, the most spectacular find - according to the researchers - turned out to be the remains of a cocklestove, which probably heated the representative room of the court.

Bis said: “Among its remains we found numerous, beautifully decorated tiles with rich geometric, plant and animal patterns. There were also images of fantastic animals, including griffin, human figures and coats of arms.”

Several hundred fragments of tiles have survived. They were mostly covered with colourful enamel: green, yellow, white and blue. According to the researchers, they probably ornamented a single cocklestove, the clay base of which has also survived.

So far, the researchers are unable to say where they originated from.

However, the researchers say stoves covered with similar tiles decorated the Renaissance interiors of the Wawel Royal Castle. Some of them, especially decorative tops or tiles with rosette motifs, are almost identical stylistically to those at Wawel.

Research project participant, historian Maciej Radomski from the Institute of Archeology and Ethnology at the Polish Academy of Sciences, said: “This proves that this building served representatives of the then social elites of the Commonwealth.”

In addition to Renaissance tiles, scientists found fragments of ceramic vessels. Among them were thin-walled table dishes designed for serving meals and kitchen utensils for the preparation of dishes. They included pots and pans on three legs. In addition, numerous post-consumption animal bones with traces of cutting and chopping were found, mainly from pigs and oxen. This is evidence of abundant feasts at the castle.

Archaeologists also discovered coins. The oldest of them is the silver penny Wenceslaus IV (1378-1419), as well as several copper schillings minted during the reign of John II Casimir, called Boratyki. In addition, interesting finds from the researchers' point of view were two spurs discovered near the 16th-century court building, probably lost in the muddy surroundings of the buildings.

The wetland, swampy area promotes the preservation of many artefacts, including wooden structures. Many of them have survived to this day, which is not a common phenomenon among the remains of buildings from hundreds of years ago, the researchers emphasise.

The search for the Żelechów castle took several years. Historians knew from a few mentions that there was a stronghold in this town in the Middle Ages. Its relics were located a few years ago with ALS and other methods that do not even require driving a shovel into the ground. It is located northwest of the Żelechów market, near fish ponds. The excavations started in 2017. In subsequent seasons of excavations, the researchers managed to unearth well preserved wooden fragments of the medieval castle. It was previously thought that underground there were massive brick or stone remains of the foundation of the structure.

The castle was not lucky. It was probably built in the mid-15th century and most likely abandoned by the Ciołek family in the beginning of the 16th century. According to the researcher, disagreements between magnates contributed to this. The seat of the Ciołek family was temporarily taken over by Feliks of Zielanka. Before the middle of the 16th century the castle probably returned to the hands of previous owners, but soon a significant part of the buildings was consumed by fire. It continued to function in some form operated until the mid-17th century, as evidenced by coins from the later period discovered during excavations, the researchers believe.

Numerous volunteers, members of the Żelechów Historical Society, the Municipal Engineering Department in Żelechów and the Volunteer Fire Brigade in Żelechów were involved in this year's research. The implementation of research was financially and organizationally supported by the Żelechów municipality. Excavations were conducted courtesy of the plot owner, Stanisław Kawka.