Hogweed in the environment reduces the diversity of bird species, says study 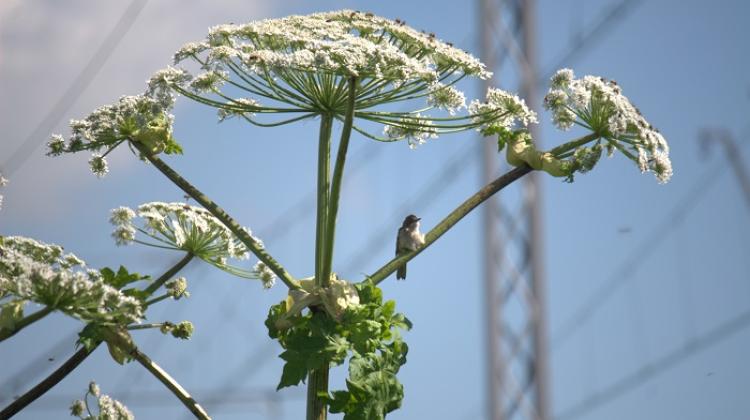 Caucasian hogweed should be removed from open areas and their invasion in other habitats should be prevented as even a small amount of them adversely affects birds, say scientists from Czechia and Poland.

The team of ornithologists have investigated how birds respond to an invasion - the process by which an introduced or accidentally brought alien species spreads into an unused ecological niche.

In 2020, bird counts were carried out on 64 research plots in Podhale, near Kraków, in the Holy Cross Mountains and on the eastern border of the Silesian Voivodeship. Half of the area contained patches of invasive hogweed, and the rest, matched in pairs, in the same habitats and landscape, served as a control giving an overview of bird grouping without the invasion effect.

Writing in the journal Ecological Indicators, the researchers said: “The invader had a generally negative impact on the total number of birds, their species richness and abundance of all bird guilds except the birds living in the ecotone zone. However, the magnitude of these impacts significantly differed along the habitat gradient.”

Dr. Emilia Grzędzicka from the Institute of Systematics and Evolution of Animals of the Polish Academy of Sciences said that Sosnowski's hogweed started to be brought to the countries of Eastern and Central Europe in the 1950s. It was intended for animal feed and as a honey plant. In Poland, this species dominates in the agricultural landscape. In turn, giant hogweed found its way mainly to Western Europe in the mid-nineteenth century as an ornamental garden plant. Hogweed is low-maintenance and occupies almost all types of terrestrial habitats.

When the expansion of an alien species occurs even in a small space, native organisms can quickly give way to it. Caucasian hogweeds are the largest herbaceous plants in Europe (up to 4-5 meters high) that can even affect organisms living in the treetops.

Birds associated with homogeneous open and wooded habitats cannot take advantage of the resources in another, still available habitat, after invasive plants have occupied one habitat.

Researchers showed that the number of birds nesting near the ground and in the undergrowth decreased even with a slight increase in the area of invasion. Homogenisation of the habitats by Caucasian hogweed, which are similar to shrubs, was used by birds that nest and feed in shrubs. Birds feeding in the treetops chose the fragmentation of forest habitats at the largest areas of the invasion.

Researchers demonstrated a negative effect of habitat diversity (in terms of number of patches) on the total number of birds, and a non-linear and negative impact of the number of habitat patches on species associated with undergrowth and ecotone in the largest invasion areas.

They emphasize that this is in contradiction with the results of many previous studies by other authors, according to which habitat diversity promotes biodiversity.

In their opinion, the recommendation of maintaining heterogeneous meadows to the benefit of bird diversity and abandoning homogeneous meadows preferred by few habitat specialists may not work in areas with the Caucasian hogweed problem.

The studies also revealed a positive effect of less than one hectare of agricultural crops on the number of birds nesting near the ground. Larger cultivation areas had a negative effect on these birds.

Dr. Grzędzicka said that fragmentation of agricultural crops typical of extensive agriculture (with protection of balks, crop rotation, etc.) has a positive effect on birds associated with open areas, if there is a problem of hogweed invasion.

The co-authors of the paper are Dr. Jan Hanzelka and Professor Jiří Reif from Charles University in Prague. Find out more about the research in the source articles (HERE and HERE).

The population of Sosnowsky's hogweed in Poland is growing, and the scale of its presence is illustrated, among other things, by Internet database and map http://mapa.barszcz.edu.pl. The General Directorate for Environmental Protection, as every year in the summer season, warns about Sosnowsky's hogweed, saying “It is an invasive alien species that contains toxic substances - dangerous to the health and life of both humans and animals.”

Environmental protection specialist and co-author of the map, Izabela Sachajdakiewicz, said: “Research based on forecasts and mathematical models shows that there is practically no place in Poland that could not be inhabited by hogweed. This is confirmed by the distribution of sites (reports) in the database, which is relatively even in our country. I includes both urban areas, including large agglomerations, as well as rural ones.”