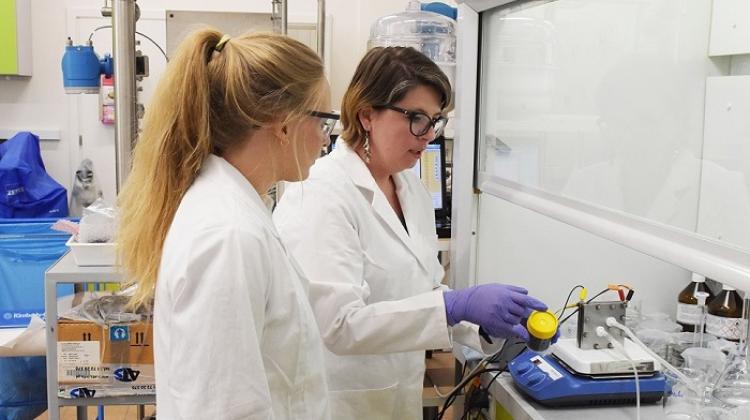 Scientists from the Warsaw University of Technology are working on technology that will enable less expensive production of hydrogen. The solution is based on a combination of molybdenum disulphide with carbon nanomaterials. Hydrogen used in fuel cells can be a source of power for cars or homes.

According to the university's website, the promising new technology has been developed by researchers from the Faculty of Chemical and Process Engineering of the Warsaw University of Technology: Dr. Marta Mazurkiewicz-Pawlicka and doctoral candidate Zuzanna Bojarska. The synthesis of molybdenum disulphide in an impact reactor was developed by Professor Łukasz Makowski's team.

Pure hydrogen is produced by the decomposition of water. As a result of the process of water electrolysis, hydrogen and oxygen are produced. Platinum, which is very expensive and in short supply, is widely used as a catalyst. Researchers are looking for a material to replace it at a low cost.

Zuzanna Bojarska said: “The subject of hydrogen evolution and catalysts based on molybdenum disulphide used for this purpose is well known. There are many techniques for obtaining such catalysts, but they cannot be used on a larger scale, because they are too expensive.

“Therefore, ultimately, our materials will be produced in impact reactors, which is a novelty. Impact reactors enable the production of materials with repeatable properties in a continuous and controlled manner. Due to their relatively simple design, they are easily scalable and can be successfully used in industry.”

She added that the reactors resemble the letter T. Two streams collide in them, providing good mixing conditions, and the product is discharged through the third channel. Reagents are injected into the reactor in the form of an aqueous solution or suspension with carbon nanomaterials, and as a result of the reaction molybdenum disulphide precipitates on the carbon surface.

To further reduce the cost of hydrogen production, the researchers are carrying out another project with researchers from Tatung University in Taipei.

Dr. Marta Mazurkiewicz-Pawlicka said: “We want to increase the activity of our hybrid in the area of solar radiation by adding semiconductor nanoparticles with photocatalytic properties. The use of such materials will allow to reduce technological costs due to the use of solar energy.”

Find out more about both projects on the Warsaw University of Technology website.