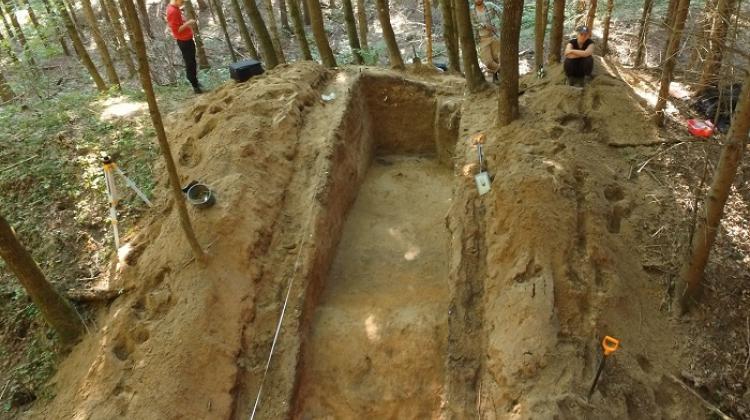 View of the trench crossing one of the outer ramparts of the fort (credit: Daniel Skoczylas)

Included in the register of monuments and known about for over 100 years, it is only now that excavation work has been carried out at the site in Pluty (Warmia-Mazury).

Project coordinator Dr. Rafał Solecki from the Institute of Archeology at the Cardinal Stefan Wyszyński University in Warsaw said: “Today, there is no trace of the structure, but the earth embankments and moats are visible to the naked eye, despite the fact that it is a forest area. “Even today the elevations reach 20 m.”

Archaeologists uncovered more details when looking at the ALS image which allowed them to study the topography in detail, even if the area is overgrown with dense forest and the elevations are not visible to the naked eye.

Although the castle did not belong directly to the Teutonic Order but to one of the four dioceses - Warmia - established in Prussia in 1243 by Pope Innocent IV, the bishops’ chapter was protected by the Teutonic Knights.

As part of the new research project, archaeologists wanted to learn more about the remains of the structure, define its period of operation and learn about the construction phases.

Dr. Solecki said: “The excavations confirmed that it was indeed a fortress from the Teutonic period. During the research within the embankments and moats, we discovered characteristic crafted ceramics as well as arrowheads and bolts. This may indicate that the castle was the target of attacks by the local Prussian population.”

In addition, archaeologists were surprised to find that the fortress from the Teutonic period was founded on the site of two earlier settlements: a fort from the early Iron Age (5th-3rd century BCE) and a tribal fort, probably from the 11th-13th centuries. The embankment of the Prussian settlement was similar to those from the times of the Teutonic Knights, the area was also surrounded by a palisade. According to the researchers, the Prussian population was driven out and a castle was built in the same place. The earth embankments surrounding the entire complex were also raised.

That a castle was built in a place where defensive settlements used to be surprised the researchers because a large part of several dozen known similar fortresses from East Prussia were built in places where no one had lived before. In the monastic state, the locations of fortresses were chosen very carefully, usually where the natural terrain had defensive properties.

The research has also shed light on what the castle may have looked like. The structure was mainly built of wood, but its foundation was brick and stone. It was about half a meter wide, which according to Dr. Solecki, means that it was probably a two-story structure with one small tower. It was not a typical stone or brick castle we know, for example, from Malbork, but rather a stately house.

When asked about the function of the fortress, the researcher said that it was supposed to strengthen the Teutonic rule in this area, but it was not a military garrison. It housed mainly church administration, perhaps it was also a place related to the collection of tributes from the local population.

The archaeological research in Pluty took place as part of a National Programme for the Development of Humanities project, consisting in the creation of a catalogue of strongholds from various periods in the area of Warmia and Mazury. Detailed information about the project is available at: www.grodziska-warmia-mazury.pl