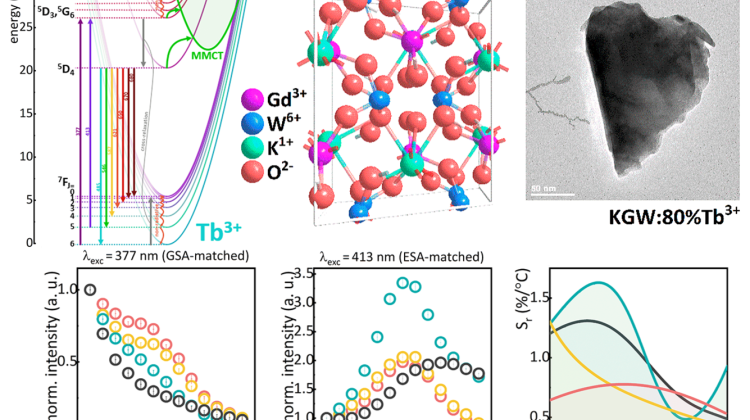 Scientists from the Institute of Low Temperature and Structure Research of the Polish Academy of Sciences and the Military University of Technology have synthesized and studied a thermoluminescent material that enables precise non-contact temperature measurement.

Luminescent thermometers are used, among other things, for studies of temperature distribution in cells in vitro, monitoring of neoplastic changes or thermal phenomena in microfluidic and microelectronic systems. They can be macro objects, and take the form of micro- or nanoparticles, as well as thin films.

Dr. Maciej Chrunik from the Faculty of New Technologies and Chemistry of the Military University of Technology explains that temperature strongly influences the optical properties of selected advanced functional materials. Luminescence thermometry is based on this phenomenon. The new materials were studied by Joanna Stefańska and Dr. Łukasz Marciniak from the Department of Optical Spectroscopy at the Institute of Low Temperature and Structure Research PAS in Wrocław.

OPTICS AS A WAY OF READING TEMPERATURE

Changes in optical temperature-dependent parameters can be used for temperature reading, such as, for example, the absolute intensity of the luminescence, its colour and spectral characteristics or the reduction of the decay time of the emitted signal.

In the publication in The Journal of Physical Chemistry C scientists presented a very accurate way of reading the temperature that makes it possible to calibrate the measurement. This method consists of analysing the ratio of the intensities of two optical signals, for which each luminophore response is differently temperature dependent.

In the described method, the luminophore material was stimulated by two light waves of different, fixed lengths. Physicists measured the intensity of a selective emission band for each of the two waves.

Structurally modified material, stimulated to glow with a beam of one wave length, should exhibit an increase in emission intensity as a function of temperature. In turn, when changing the laser wavelength, the intensity of material emission should drop. The ratio of two measured intensities is a parameter that is characteristic of a given temperature, and thus can be used to read it.

'GREEN LIGHT' FOR THE NEW METHOD

Researchers studied the luminophore KGd(WO4)2 (KGW) doped with various concentrations of terbium ions (Tb3+). These ions strongly emit characteristic green light. But when they are stimulated with a single beam, usually in the field of near ultraviolet, the intensity of emission temporarily disappears.

The optical thermometer can be improved by modifying the crystalline structure of the luminophore to increase the fading in a classic approach, or, alternatively, improve the emission enhancement.

The authors decided to focus on the first of the methods and for this purpose used the material in which the tungstate group (WO4) is capable of absorbing part of the energy from the excited terbium ions and causing them to glow with lower intensity. This process is the stronger, the higher the temperature, and therefore contributes to improving the thermometric properties of the studied material.

The thermoluminescent material was synthesised in the Department of Crystal Physics and Technology of the Military University of Technology.