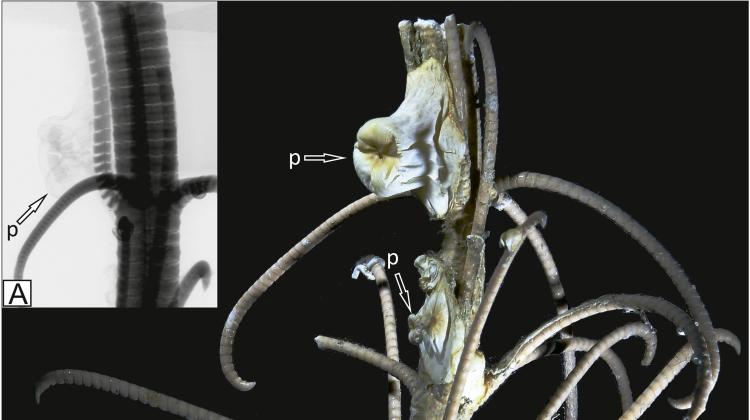 A ‘living fossil’ thought to be extinct for over 270 million years has been discovered in the Pacific by researchers from Poland and Japan.

A ‘living fossil’ thought to be extinct for over 270 million years has been discovered in the Pacific by researchers from Poland and Japan.

The non-skeletal corals which grow on marine animals called sea lilies (crinoids) and known from the Palaeozoic seas, were found 100-metres deep off the coasts of Honshu and Shikoku.

The fossils of crinoid-coral associations are often found in Palaeozoic rocks, but the youngest of them date back ca. 273 million years. While both corals and crinoids were common in later seas, such associations are unknown either from younger rocks nor from contemporary seas.

Dr. Mikołaj Zapalski from the Faculty of Geology of the University of Warsaw said: “The research was conducted using microtomography scanning and revealed that, unlike their Palaeozoic counterparts, recent corals do not modify the host's skeleton.

“Despite such differences in the skeletal record, the newly discovered coral-crinoid associations may serve as a good model of relevant Palaeozoic interactions.”

The paper on marine symbiosis has been published in Palaeogeography, Palaeoclimatology, Palaeoecology.

Other scientists involved in the research project were: Professor J. D. Reimer, Dr. Hiroki Kise and Dr. Takato Izumi from the University of the Ryukyus, Dr. Ryuta Yoshida from the Ochanomizu University, and Dr. Marek Dohnalik from the Oil and Gas Institute - National Research Institute.