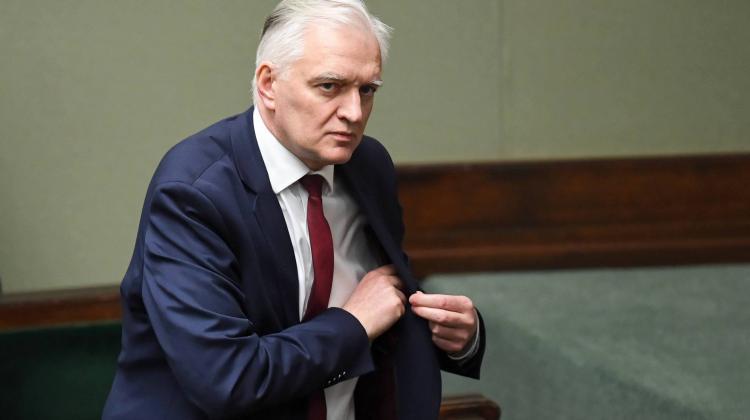 Gowin declared that his party (Agreement) would remain part of the United Right coalition and recommended the development minister Jadwiga Emilewicz as deputy prime minister.

Government spokesman Piotr Müller commented on Twitter that Prime Minister Mateusz Morawiecki accepted Jarosław Gowin's information that Agreement changes the recommendation as to the position of deputy prime minister. 'All steps in this matter will be taken based on the current coalition agreement', he wrote.

During the Monday press conference, Gowin stressed that in the current situation, everyone should focus on two issues: the fight against the coronavirus pandemic and the fight to protect the Polish economy. He added that 'the issue of presidential elections should also be resolved somehow'. He reminded that he had first proposed to delay the election for a year, but only PSL supported that proposal. His next proposal envisaged constitutional changes and delaying the election by two years. As he said, this proposal was accepted only by PiS.

'I believe that the election should be delayed, that the date of May 10 is out of the question. Therefore, as MPs of Agreement, we proposed an amendment to our coalition partners from the United Right consisting in introducing a three-month vacatio legis, and thus delaying the election', he pointed out.

Gowin added that his party's proposal was not accepted by the coalition partners. 'I was not able to convince them to do so and therefore I resign', said Gowin.

Jarosław Gowin (born on December 4, 1961 in Krakow) was appointed Deputy Prime Minister and Minister of Science and Higher Education in November 2015.

During his term, systemic reform of higher education and science was carried out and the so-called Constitution for Science (the Law on Higher Education and Science) introduced. The reform was preceded by a lengthy discussion with the academic community.

The Law makes many university options (including awarding academic degrees) dependent on the academic category that the university obtains in its disciplines. The reform has also changed the model of education of doctoral students: in doctoral colleges operating since October 2019, each doctoral student is provided with a scholarship. The Constitution for Science emphasizes that scientists should publish in scientific journals included in international databases that help scientists from around the world reach this content. After the reform, universities also gained greater freedom in deciding on their activities.

During Gowin's leadership, the Ministry of Science proposed and introduced two innovation laws. They increased the amount of the tax credit for research and development. The Łukasiewicz Research Network was also established. It consolidates 38 Polish research institutes.

Jarosław Gowin graduated in philosophy at the Jagiellonian University in 1985. He obtained his doctoral degree in 2001 at the Institute of Political Studies of the Polish Academy of Sciences for his dissertation on the Catholic Church after 1989. In the 1980s, he was active member of the opposition (the Independent Students' Union and Solidarity). He was also a scholarship holder at the University of Cambridge. For many years he collaborated with the monthly Znak, in 1994-2005 he was its editor-in-chief.

In 2003, he founded the Tischner European University in Kraków and was its rector until 2013.

Gowin entered politics in 2005. From November 2011 to May 2013 he was the Minister of Justice in Donald Tusk's second government of.