The four warriors buried with rich grave offerings in the central part of the cemetery in Ciepłe (Pomerania) came from Scandinavia, expert analyses show. This is proof that people of foreign origin were members of the Piast state elites, scientists suggest.

Archaeologists investigating a cemetery dating from the first Piast monarchy of Bolesław I the Brave have published their latest findings.

The discovery in the small village of Ciepłe near Gniew in Eastern Pomerania, has so far revealed over 60 graves, but the archaeologists believe there may be more.

Dr. Sławomir Wadyl from the Archaeological Museum in Gdańsk said: “In the central part of the cemetery there were four very richly equipped chamber graves. Men, probably warriors, were buried in them, as evidenced by the weapons and equestrian equipment deposited with the bodies.”

“It turned out that all the dead buried in the central part of the cemetery came not from the then Piast State, but from Scandinavia, most likely Denmark,” said Dr. Wadyl. 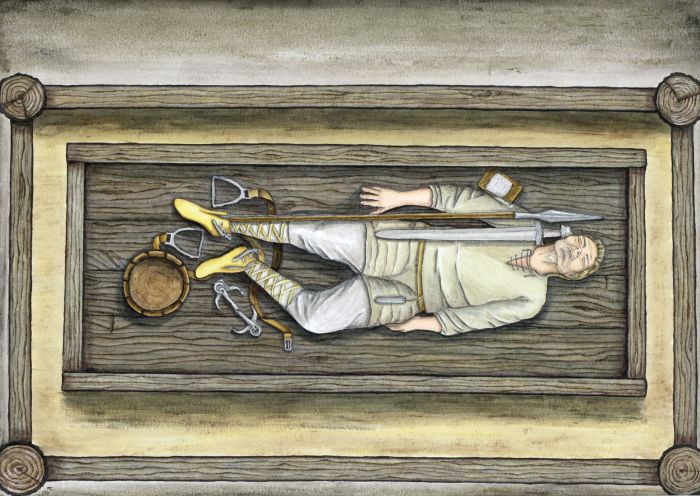 Artist`s reconstruction of one of the graves in the central part of the cemetery. Fig. K. Patalon

According to the archaeologist, richly decorated swords and spears were discovered in the graves, as well as full sets of equestrian and horse equipment in the form of spurs, stirrups, bits and buckles, probably associated with stirrups. Some of these items, primarily swords or spearheads, were made in Western European or Scandinavian workshops.

Among the objects discovered in chamber graves were also coins, metal and wooden utensils, scales with weights, a comb, knives and metal decorations. Animal remains of or millet grains indicate that food was also deposited in the grave during the funeral. 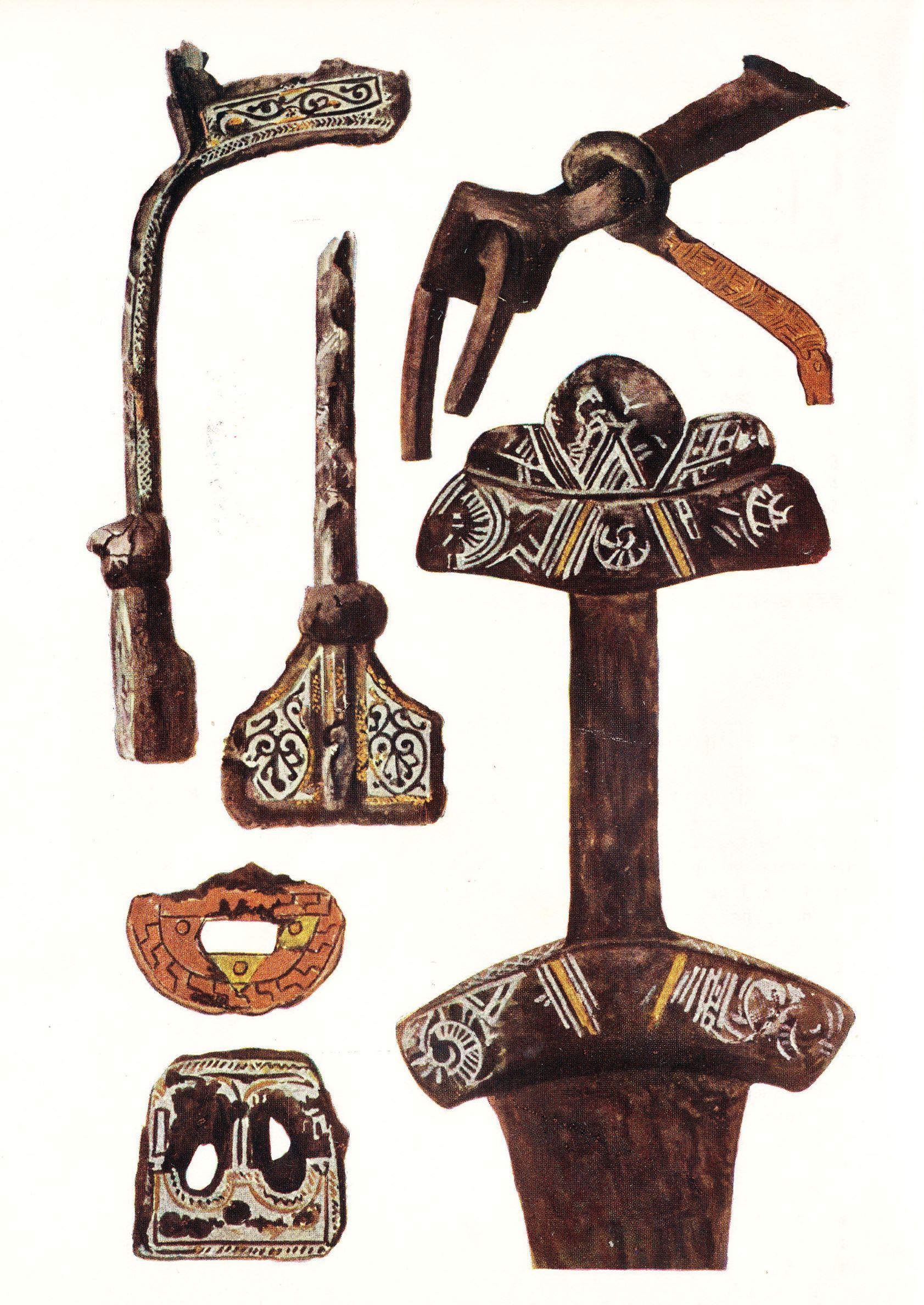 Equipment from one of the graves of warriors. This burial was examined in 1900. Credit: La Baume

Dr Wadyl points out that this type of grave (chamber grave) is known from Scandinavia and Eastern Europe. In these regions one should look for inspiration for this type of elite burials in Poland.

In the central part of the cemetery, there were two chamber graves with dimensions of about 3.5 by 2 m, made of wooden logs. The technique involves the horizontal laying of wooden logs connected with cog joints in the corners. “It was one of the more popular home-building techniques at the time, so you could say that they were +death houses+,” said Dr. Wadyl. 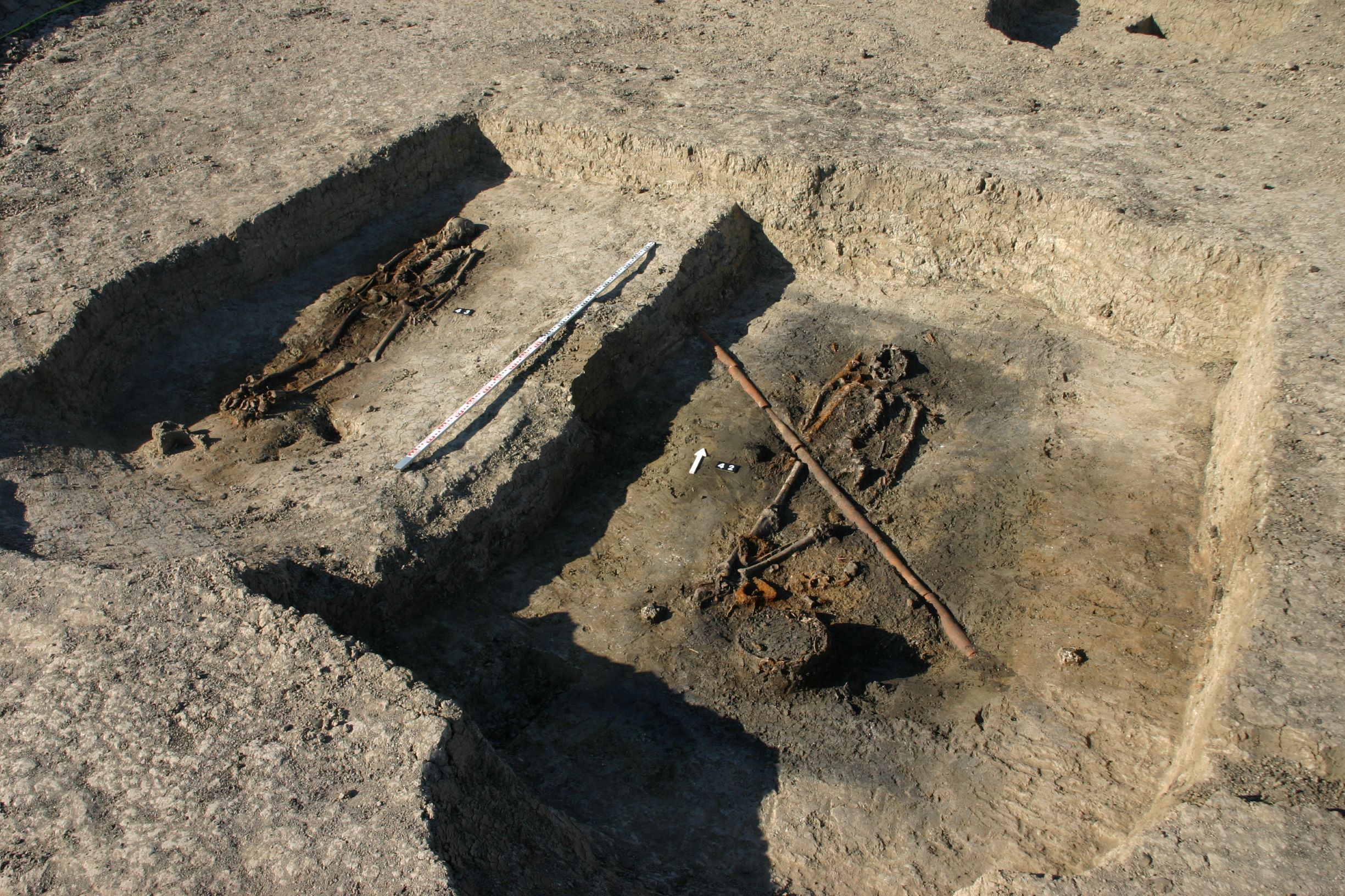 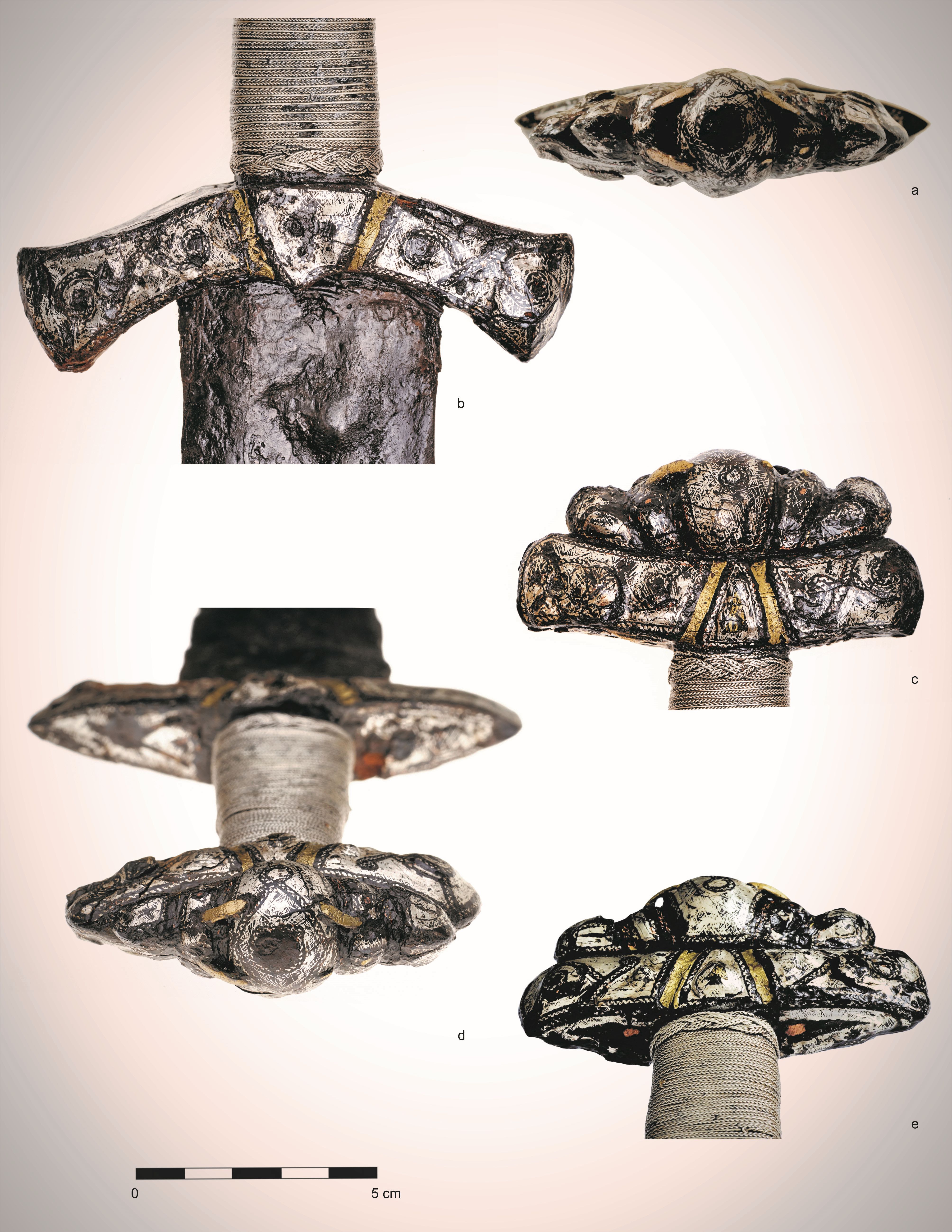 Z type sword from the grave in the central part of the cemetery. Credit: J. Szmit

The group of graves was surrounded by a fence or palisade. Dr. Wadyl suggests that the memory of the graves existed for quite a long time among the local population, as evidenced by the fact that they were not destroyed and no more dead were buried in this place. According to the researchers, these are the oldest graves in the entire cemetery.

Outside of the central part of the necropolis, the deceased were buried mainly in burial pits dug directly into the ground. Most of the buried people were from the immediate area; they could also have come from Kujawy or Greater Poland, the results of strontium isotope analyses show. A dozen or so people buried in the cemetery were probably born (or spent their childhood) in Scandinavia, and the last years of their lives in Pomerania.

Spur from the grave of a warrior, credit: K. Odya

Chamber-type graves from the Middle Ages are a rare find in Poland. For years, archaeologists and medievalists have been discussing who was buried in them, where the deceased came from, and how they influenced the emerging state of the first Piasts. It was suggested that they might have been Scandinavians, but until now there was no evidence. Another group of archaeologists were of the opposite opinion. Chamber tombs made during the first Piast monarchy are known from Dziekanowice (Gniezno poviat), Kałdus (Chełmiński poviat), Pień (Bydgoszcz poviat) and Sowinki (Poznań poviat). “But the largest ones, with the richest equipment, are in Ciepłe,” Dr. Wadyl said.

The interpretation regarding the foreign origin of the deceased in the central part of the cemetery is supported by the findings of researchers from another, slightly less rich cemetery from the same period discovered in Bodzia (Włocławek poviat). A member of the armed elite of Mieszko I was buried in a mausoleum in the form of an earth mound, believes Professor Andrzej Buko. The nobleman was born on the Vistula River, but spent a significant part of his life in Scandinavia. Such determination was possible thanks to the analysis of strontium isotopes contained in the deceased`s teeth. Nearby, in later graves, people of foreign, probably Scandinavian descent were buried, researchers have determined.

According to Dr. Wadyl, settlements in the area of Ciepłe were founded by Bolesław I the Brave. For the growing early Piast state, the settlement of people was one of the means to gain control and sovereignty over the eastern part of Pomerania and the extremely important and prospective Vistula route.

"The deceased buried in the central part of the cemetery represented the then social elites, as evidenced by the monumental structure of their graves and rich equipment. They probably belonged to a group of elite riders, but their role was probably not limited to the function of warriors,” Dr. Wadyl said.

Dr Wadyl believes that they collected taxes from the local population for the benefit of the Polish ruler. “This is indicated by scales with sets of weights found with two of the dead buried in chamber graves, and with the other two - touchstones used for assaying precious metal alloys, at the same time, indicating access to these metals and participation in trade,” he added. 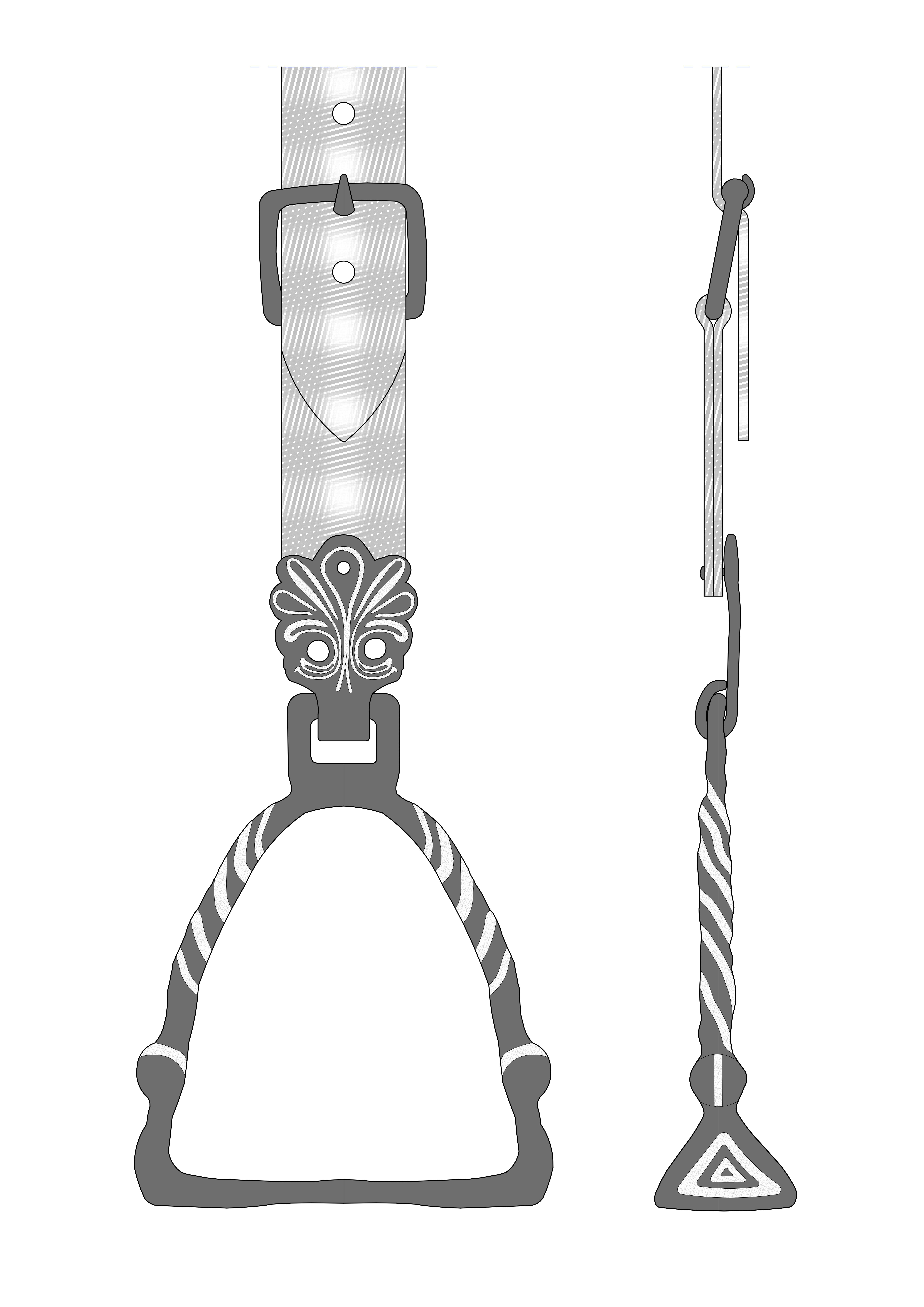 Reconstruction of the stirrup from the grave, in which one of the Scandinavians was buried, credit: K. Patalon

Excavations within the necropolis in Ciepłe lasted 10 years, from 2004 to 2014. The necropolis was discovered in 1900. Near the cemetery there are three strongholds and settlements that existed from the turn of the 11th century.

Promotion of the publication `Ciepłe. Elite early medieval necropolis in Eastern Pomerania` on the discoveries in Ciepłe was held at the Archaeological Museum in Gdańsk.