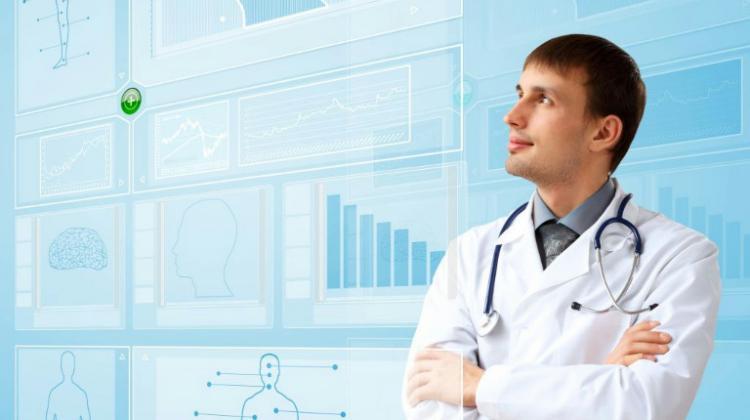 Dr. Katarzyna Kolasa, an expert in the field of health economics and artificial intelligence in medical care from the Kozminski University in Warsaw, talks about possible changes to medical care as computers becoming increasingly involved.

PAP - Science in Poland: Computers, including intelligent algorithms, are increasingly entering the world of medicine. What can we expect in connection with this trend?

Dr. Katarzyna Kolasa: New medicine will be based on digital solutions and data. This will apply to pharmacological treatment, various types of medical devices, as well as support for medical staff.

SiP: Let`s look at these forecasts. Are we talking about smart tablets, for example?

KK: Yes, it is already happening. Chip tablets are being developed to monitor when they were swallowed, at what dose, and whether they were metabolised properly. This type of medication for people with schizophrenia is now available.

SiP: Meanwhile, surgeries are now more often performed by robots, man-controlled ones for now. Will they completely replace surgeons?

KK: Computers and robots may not be able to perform surgeries completely autonomously, but they may become capable of working under the supervision of a specialist, who will, for example, check if the right algorithm is being used. Thanks to fast communication, another specialist, for example from a beach in the Bahamas, will be able to evaluate the result of the procedure.

SiP: Artificial intelligence is getting better at diagnosing diseases. Will computers prescribe medication?

KK: Intelligent algorithms help not only radiologists, but also dermatologists, for example when detecting skin cancers. But they are just beginning to support specialists.

SiP: So doctors do not have to be afraid of losing their jobs for now?

KK: I think that medical professions are unlikely to start disappearing from the catalogue of professions as a result of the spread of algorithm-based systems. Instead, we can expect new specializations. Recently, The Lancet described new qualifications in demand, such as data scientists. At Kozminski University, we offer studies in this field (Health Economics and Big Data) financed from EU funds, which I have the pleasure to be head of.

SiP: It`s hard to believe, however, that there will be no problems during this development.

KK: We don`t have a problem with innovation. Problems appear with attempts to adapt it. But if we do not do that, difficult situations will arise. For example, a recent Chinese publication describes a programme that, based on pictures of 1,600 faces, learned to determine the risk of a person committing a crime based solely on their appearance. It can be similar in medicine. Based on the analysis of large resources of various types of data, a computer will be able to raise the alarm about the threat of some disease. Should we leave it to artificial intelligence? Or should a doctor handle that? These are important questions. Such issues should be considered in expert and public debate.

SiP: What about universal access to these new technologies? Will social stratification not increase?

KK: Inequalities in health care have many dimensions and earning considerations will certainly matter. Our Polish healthcare system is already based on two uneven legs: the public and private sectors. It will be necessary to determine who should pay for huge investments in introducing new technologies, and on what terms and to whom modern services should be made available.

SiP: Medical systems, e.g. diagnostic systems, will probably also have access to growing amounts of data about each person. We are being surrounded by the internet of things, with various types of sensors. Heart rate or pulse monitoring is just the beginning. How can this be used?

KK: We will monitor - and in some cases we already do - the quality of our sleep, glucose, stress or cholesterol levels, how many steps we walked on a given day, etc. It will be possible to better assess the risk of diseases or serious events, e.g. heart attack or stroke, and the system will call an ambulance if necessary. In the future, such systems should be relatively easily accessible.

SiP: What else will such systems be able to do?

KK: There are many possibilities. In the US, the Food and Drug Administration introduced an intelligent application with a twelve-week programme to help people addicted to opioids. Programmes are also being created to help people with depression. They talk to the patient and monitor their mood. In the case of deterioration, they alert a doctor. This is important, because half of depression patients have suicidal thoughts. Thanks to such technologies, it is possible to relieve medical staff who will be able to focus on matters, in which a person cannot be replaced. However, an appropriate refund is needed.

SiP: Will all this personal data be safe?

KK: Each patient will decide what data to share. According to the GDPR, a person owns personal data, not a hospital. On the other hand, the potential benefits are huge. Today, patients move between private and public clinics, between which there is no flow of information. People die because of this. On the other hand, thanks to digitisation, it is possible to create a central system storing all medical information of a given person, which every doctor will be able to access if necessary. I will say more: I think we should share our data for medical research, just like we agree to donate organs after death. Half of the population of Iceland did this. As for the unauthorized use of this data, I would compare this risk to that associated with the use of online banking.