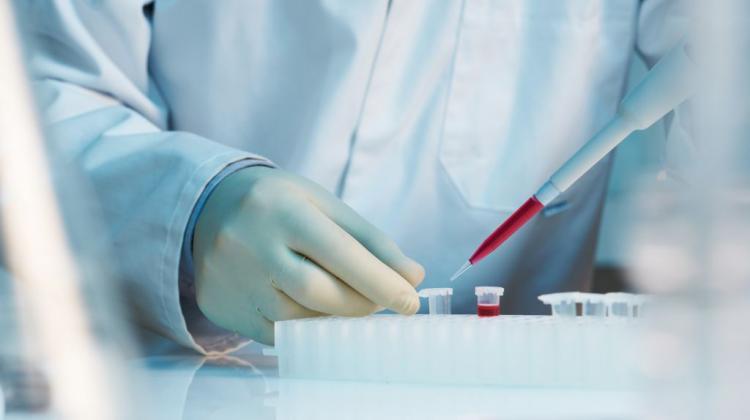 The preliminary results of clinical tests of a new drug for atopic dermatitis (AD) are promising, say doctors.

Writing in the Science Translational Medicine publication (https://stm.sciencemag.org/content/11/515/eaax2945), researchers noted that after being injected with the antibody the skin condition of all 12 patients with moderate and severe atopic dermatitis improved greatly and in 10 of them after just 29 days.

Co-author Dr. Danuta Gutowska-Owsiak from the Inter-university Faculty of Biotechnology of the University of Gdańsk and the Medical University of Gdańsk said: "We tested etokimab, a new monoclonal antibody that targets interleukin 33 (IL-33), a protein suspected of being strongly involved in the allergic process.”

"It turns out that even a single administration of a dose of the drug to patients greatly improved their clinical parameters, skin condition and quality of life.

“In some patients, the improvement was still visible 20 weeks after dosing.”

She added that the results of the first clinical trials show that the drug is safe and works.

Lead investigator Prof. Graham Ogg from Oxford said that the drug is now being tested on a double-blind randomised sample of people with AD and the researchers are waiting for the results.

The trials have now entered phase IIB and are being conducted in clinical centres around the world on a sample of 300 people.

Atopic dermatitis is the most common chronic dermatological disease in children. It is estimated that 10-30 percent children and 2-10 percent adults in Europe have symptoms of AD. The disease develops due to atopy, i.e. an abnormal, excessive reaction of the body to contact with an allergen. The skin of patients with atopic dermatitis is excessively dry and itchy. Patients also damage it by scratching. Because of this, pathogens and allergens that intensify the symptoms of the disease can get into the body even more intensively.

In infants, skin lesions appear on the face first, followed by the neck and torso. In children after the first year of life and in adolescence, the lesions are located mainly in the joint bends - under the knees, in the elbows. In adults, the lesions can be spread.

People with atopic dermatitis are more likely to be allergic to pollen, dust mites or food allergens.

Dr. Gutowska-Owsiak said: "This causes the allergic march - it all starts in the skin and then affects other systems, for example asthma, food allergy or hay fever develops.”

She added that the problem of this disease is not only the high cost of treatment and elimination diets, but also the sense of powerlessness in the fight against the disease.

AD is usually treated with barrier ointments and creams, and when the symptoms get worse, steroids are used. Oral medications are used relatively rarely because of the risk of side effects. Now there is hope for a new type of therapy.

"In our research, we show how this new drug can work and what mechanisms can make it effective," the immunologist said.

Dr. Gutowska-Owsiak moved to Gdańsk from Oxford two years ago. Thanks to return funding (a Polonez Fellowship from the National Science Centre) and a grant to establish a new research group (First TEAM from the Foundation for Polish Science), she began conducting her own immunological research in Gdańsk.