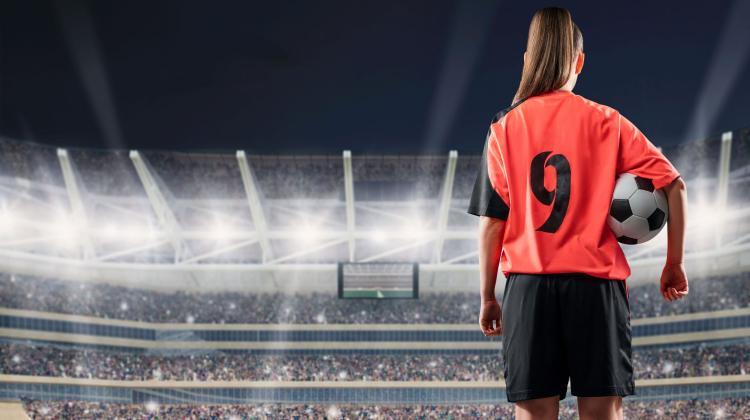 Women`s football players have up to three times greater changes in the neck and pelvic asymmetry than women who do not play. They usually kick the ball with their right foot, their muscles do not work symmetrically, one side of the body is more heavily loaded, the fasciae also stretch unevenly, show studies with the participation of women`s extra league.

Injuries, mainly of knees, and posture defects can be prevented by smart training. An interdisciplinary team of scientists is working on the prevention of spinal overloads during the training cycle of women`s football players. Player posture studies indicate that players need a precise set of exercises that will stabilize the lumbar region and reduce myofascial imbalances.

The players of the Polish Women`s Extraleague from AZS PSW Biała Podlaska underwent optical measurements. Scientists used 3D photogrammetry. They investigated how asymmetrical loads associated with the specificity of this sport affected the body posture of young women playing football.

The research has been conducted since 2016 by a team composed of Dr. Marek Sutkowski and Dr. Sławomir Paśko from the Warsaw University of Technology, Dr, Beata Żuk from the Medical University of Warsaw and Dr. Tomasz Grudniwski from the State School of Higher Education in Biała Podlaska. The results were published in Nature Scientific Reports.

Researchers remind that posture is closely connected with the act of movement. Static body position begins and ends all motor activities. Through research on athletes` posture, scientists have proven that the training load affects the condition and development of the body. In young women training football, body asymmetries can be caused by one-side training loads, position on the pitch and repetitive movements with only one preferred limb. According to researchers, it is worth introducing exercises to reduce myofascial imbalances in training.

The researchers note in their publication that women`s football is a relatively young sport. Like men`s football, it is an endurance sport with repetitive complex movement sequences and a high risk of leg injuries. In most cases, these injuries are associated with anterior cruciate ligament damage. Interestingly, women playing football usually have knee injuries in the supporting leg, while men have injuries to the limb leading the ball. The reasons for these discrepancies may be related to anatomical differences. Neuromuscular control also depends on the sex. However, it is necessary to conduct separate research on this issue with the participation of football players.

Polish researchers evaluated the women`s football players` body posture based on selected body points in two static positions: the habitual and actively corrected position. 42 women between 16 and 20 years of age were tested using non-contact optical measurement. Their results were compared with the control group.

As the authors of the publication point out, most of the examined players use their right foot during the game. The dominant limb is more strained during matches and training. But it is not the only strained limb. To increase the torque when kicking the ball and maintain body balance, players often raise their left arm up and forward. At the same time, they stretch the widest spinal muscle on the left side of the body.

In football, loads are associated with taking the ball from the opponent and stretching the side structures of the body by means of twisting of one of the anatomical straps surrounding the body. Therefore, the body posture of footballers is also affected by myofascial disorders. The body consists of many connected structures. Fascia is a type of connective tissue that penetrates and surrounds all organs, muscles, bones and nerve fibres. Fasciae can transfer biomechanical forces and change shape in response to loads, or adapt to long-term loads.

Changes were also seen in the lower neck and pelvic girdle. Football players had up to three times larger changes in specific angles in the posterior segment of the cervical spine compared to women who did not play football. It was confirmed that the increased tension in one limb increases the tension in other parts of the body, even those on the opposite side. The pelvic girdle is involved in the transmission of forces between the spine and legs. It functionally works with the upper cervical spine of the human spine. In footballers, the level of pelvic asymmetry was almost three times higher than in other subjects.

Asymmetry was also demonstrated in the size of the quadriceps muscle of the leg leading the ball. It was not correlated with the number of injuries. Previous studies have shown asymmetry of the pelvic muscles and impairment of lumbar spine stabilizers, manifested in lower back pain. Hence the need to include exercises stabilizing the lumbar-pelvic complex in the training.

Not only football, but also volleyball is an example of a discipline associated with heavy training loads. Serve and attack are techniques that can also contribute to spinal asymmetry. Thanks to the results obtained by the researchers, it will be possible to introduce a modern tool for assessing the quality of women`s health into the training cycle.