Climate scientist: This year`s summer in Poland was record warm 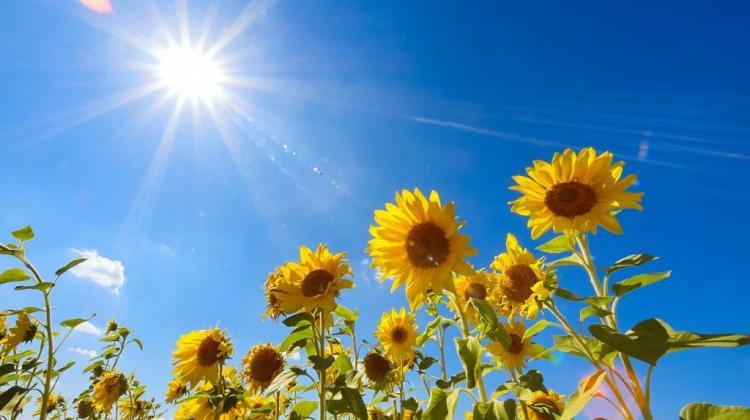 In the last dozen or so years, the meteorological summer temperature in Poland has been above average practically all the time. There were temperature records also in the summer of 2019. It is associated with global warming, says climate scientist Dr. Szymon Walczakiewicz.

According to the Institute of Meteorology and Water Management, this year`s summer in Poland was warm and dry. "Local temperature records were set, but rather in terms of monthly average than extreme value", according to the institute`s release sent to PAP.

July was also hot, with temperatures above the norm in most of Poland. The hottest place was Włodawa, where 37.3 degrees C was recorded. In turn, August was "above the norm" in terms of temperatures in the north-east of the country, and in the remaining area - "significantly above the norm", according to the Institute of Meteorology and Water Management.

"In the last several years, the temperature of the meteorological summer has been above average practically all the time", Dr. Szymon Walczakiewicz from the Climatology and Meteorology Unit of the University of Szczecin sums up in an interview with PAP.

Both the summer of 2018 and of 2019 are considered to be record warm in our country. Calculations on the website meteomodel.pl (based on data from the Institute of Meteorology and Water Management) show that this summer was 2.5 degrees C warmer than the average from the reference period 1981-2010. "The average summer temperature of the period 1981-2010 was 17.3 degrees Celsius, while the summer of 2019 had an average air temperature of 19.8 degrees Celsius", the climate scientist explains.

The scientist points out that very high temperatures did occur in previous years and decades. However, their long-term presence may be a cause for concern. "One- or two-day heat waves are not significantly threatening, but 10-day ones certainly are", he says.

This year, summer heat was felt by the inhabitants of most of Europe, and the media reported temperature records, especially in Western Europe. For example, at the end of July, 42.5 degrees C was recorded at one of the meteorological stations in Paris (Paris-Montsouris). It is a heat record on a scale of over 70 years. In Germany, for the first time since the start of measurements (in 1881), meteorological services recorded 42 degrees C at the end of July! Historic heat records for July were recorded in the Netherlands and Belgium, where thermometers showed 40.4 and 40.6 degrees Celsius respectively.

It was also hot in Central and Eastern Europe. According to Lithuanian hydrometeorological services, the temperature in the second half of June was higher than the average for this month by as much as 6 degrees Celsius.

Average air temperatures in Europe, including Poland, are rising. Scientists recognize this as one of the consequences of global climate change. "This is clearly visible on the example of the summer period. In recent years, compared to the other seasons, this period is most often extremely warm", Dr. Walczakiewicz notes.

The climate scientist suggests that it is a matter of time - a few, maybe a dozen or so years - before maximum temperatures reaching 40 degrees C or even exceeding this value are recorded in Poland.

Prolonged heat waves in Europe are in part a consequence of rising temperatures in the Arctic, as a result of which atmospheric waves occurring in the troposphere begin to slow down (their speed of movement decreases), which translates into a longer inflow of hot, tropical air masses from the south, Dr. Walczakiewicz explains.

He also draws attention to the serious consequences of rising global temperatures. More frequent heat waves translate into mortality rate increase, especially in the group of the sick and the elderly. The landscape is also changing: glaciers (including mountain glaciers), which could be seen for most of the year only a few decades ago, have partially disappeared or significantly reduced their range. Winters are getting warmer. Water reservoirs are drying up. Some species of plants and animals will begin to die out.

The Institute of Meteorology and Water Management notes that droughts are now more common in summer. "We observe a shortage of rainfall, very low flows in rivers and a low level of groundwater. And at the same time, there is a very large spatial diversity of rainfall anomalies, for example in June in Katowice there was 3% of the precipitation norm, and on Hel the long-term norm was exceeded twice", reads the release sent to PAP.

The institute representatives add that the changing climate also means a greater number of extreme meteorological phenomena such as storms in the summer. "Thunderstorms with very strong winds and heavy rainfall have always been happening, but not as often as now", the institute emphasizes.

The summer ends on Monday at 9.50, when the Sun reaches the point of the September equinox (called the first point of Libra), beginning the astronomical autumn.